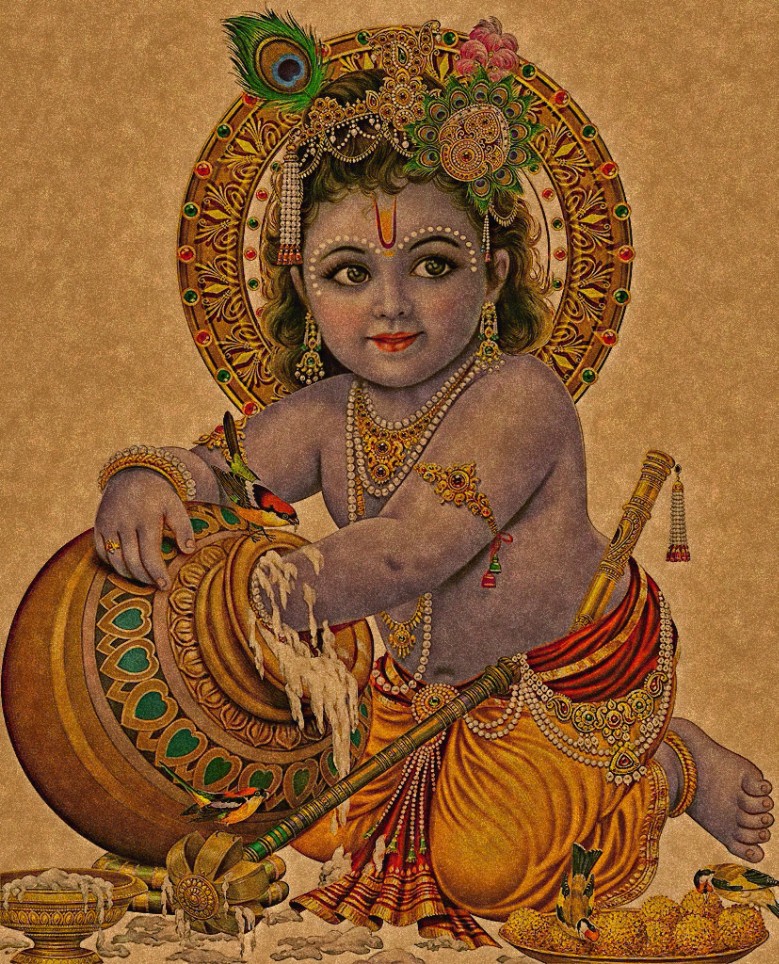 A time filled with love, devotion, and gratitude.

After going through the intense summer and a humid monsoon, we in India perceive sarat, or autumn, as one of the most beautiful seasons of the year. According to the vedic calendar, Sarat falls during the months of Asvin and Karttika, of which Karttika carries special significance because it is favored by Lord Krishna.

Everyone loves certain foods, drinks, clothes, and music, and Lord Krishna is no exception. In fact, we have our likes because we are parts of Krishna, who has His own personal likes. Krishna loves butter, yellow clothing, peacock feathers, cows, flutes, and the land of vrindavan. Similarly, of all months, He loves Karttika the best.

A Month of Love

Devotional service can be performed at any time, in any place, yet devotees know well that devotional service performed during Karttika is especially pleasing to the Lord. Therefore they perform additional austerities and devotional practices during this month. Although the vedic scriptures describe in detail material benefits one may derive by performing devotional service during Karttika, pure devotees of Lord Krishna have no interest in these. rather, they are interested only in pleasing the Lord. every year, ISKCON devotees eagerly await the arrival of Karttika, when they daily sing the Damodarastakam prayers and offer heartfelt love and devotion as they circle ghee lamps before the Lord. Throughout the month they are so immersed in the childhood pastimes of Krishna as damodara that you can hear them constantly sing about them.

The Damodarastakam prayers, composed by Satyavrata muni, beautifully describe the damodara pastime, in which Yasoda binds mischievous Krishna to a grinding mortar. The prayers also give information about God, His devotees, and the science of devotional service. The essential lessons we learn from the pastime and the Damodarastakam prayers is that the all-pervading, allpowerful Lord is easily conquered by the love of His devotee and that the love-saturated devotees desire nothing except to constantly hear and glorify His pastimes.

O Lord damodara, although You are able to give all kinds of benedictions, I do not pray to You for the boon of impersonal liberation, nor for the highest liberation of eternal life in vaikuntha, nor for any other, similar boon. o Lord, I simply wish that this form of Yours as baby Gopala in vrindavana may ever be manifest in my heart, for what is the use to me of any other boon besides thisn Your supremely enchanting face, encircled by shining locks of dark-blue curling hair, resembles the fully blossomed lotus tinged with a reddish luster due to its being kissed again and again by mother Yasoda. may this vision of Your lotus face, with lips as red as a bimba fruit, remain forever in my heart. millions of other benedictions are of no benefit to me. Damodarastakam 4–5

According to Srila Visvanatha Cakravarti Thakura, Lord Krishna enacted the damodara-lila on the day of dipavali (diwali). In this pastime, which is described in the Tenth canto of Srimad-Bhagavatam, Krishna angered His mother, Yasoda, by breaking a pot of butter. He then ran away when He saw a furious Yasoda chasing Him. After a great struggle, Yasoda caught baby Krishna and tried to bind Him with rope to a grinding mortar. but surprisingly, she found the rope she was using was two inches too short. Although she added more rope, every time she tried to bind Krishna she found the rope was short by exactly two inches. Finally, Krishna, appreciating His mother’s hard endeavor, agreed to be bound. devotees then began to call Him damodara, “one whose udara (belly) is bound by dama (ropes).” Srila Prabhupada writes:

Yogis, mystics, want to catch Krishna as Paramatma, and with great austerities and penances they try to approach Him, yet they cannot. Here we see, however, that Krishna is going to be caught by Yasoda and is running away in fear. This illustrates the difference between the bhakta and the yogi. Yogis cannot reach Krishna, but for pure devotees like mother Yasoda, Krishna is already caught. Krishna was even afraid of mother Yasoda’s stick. . . . Krishna is afraid of mother Yasoda, and yogis are afraid of Krishna. Srimad-Bhagavatam 10.9.9, Purport

When devotees see the master of the entire universe bound by the love of His devotee, their hearts are filled with extreme gratitude. Attracted by Krishna’s divine qualities, their hearts are uncontrollably pulled toward Him. Although devotees do not wish to subdue the Lord, He takes extra pleasure in being ordered and controlled by His devotees. each tries to be controlled by the other, because where love is present, happiness lies not in winning but in being won over. Srila Prabhupada writes in his purport to Srimad-Bhagavatam (6.16.34), “The Lord and the devotees both conquer. The Lord is conquered by the devotees, and the devotees are conquered by the Lord. because of being conquered by one another, they both derive transcendental bliss from their relationship.”

After immersing their minds in this wonderful pastime for an entire month, devotees feel much more closely connected to their Lord. You can also try this immersion. If possible, visit an ISKCON temple and take part in the Damodar- astakam prayers throughout Karttika, offering your own devotion to Lord damodara with your lamp. If you cannot visit an ISKCON temple, please arrange to sing these prayers and offer lamps at home.

After killing the demon ravana, Lord ramacandra entered Ayodhya on dipavali. To celebrate this event the residents of Ayodhya used lamps to illuminate the city, which in the Lord’s fourteen-year absence had come to resemble a city haunted by ghosts.
Damodarashtakam – Back To Godhead
Ayodhya is like our heart, and Sita-rama are the life-force within that heart. Ayodhya was once a wealthy city, but when Sita and rama left it, the residents felt they had lost their hearts and behaved like moving corpses. It is impossible to describe the mental agony these people suffered in separation from their beloved Lord. They performed their daily duties only as a formality and maintained their lives only in the hope that one day they would again see Lord rama. caitanya mahaprabhu expressed His own feelings of separation in His Siksastaka (7): sunyayitam jagat sarvam govinda-virahena me. “In Your absence, I feel that the entire universe is a dreary void.”

When Lord rama returned to Ayodhya, the city’s residents regained their life and their distressed hearts lit up with joy. This light became manifest in the form of lighted lamps.

Govardhana Puja also falls in the month of Karttika. When Krishna convinced nanda maharaja to stop the family’s traditional Indra Puja, an infuriated Indra sent a heavy downpour of rain over vrindavan. but because Krishna protected vrindavan, Indra could not destroy even a particle of dust of this holy land. With the little finger of His left hand, Krishna effortlessly lifted Govardhana Hill and crushed Indra’s pride, thus protecting the devotees of vrindavan.

This pastime, too, proves Krishna’s unlimited love for His devotees. In the Bhagavad-gita (18.66) Krishna assures us that if we abandon all varieties of religion and just surrender to Him, He will protect us in all situations. by lifting Govardhana Hill, Krishna showed how He will go to any extent to protect His loving devotees. by meditating on this pastime, devotees feel extremely grateful and are ready to give up everything and surrender to Krishna.

Finally, for devotees of ISKCON the month of Karttika holds another importance: ISKCON’s founder-acarya, His divine Grace A. c. bhaktivedanta Swami Prabhupada, left this world during this month and rejoined Lord Krishna in His eternal pastimes in the spiritual world. everyone, especially devotees in ISKCON, will remain eternally indebted to Srila Prabhupada, without whose guidance we would have never understood the significance of damodara-lila, dipavali, Govardhana Puja, or Karttika, nor would we have appreciated the inconceivable love between the Lord and His devotee.

Glories of the Month of Karttika

In the Padma Purana it is said: “of the twelve months, Karttika is the most dear to Lord Krishna. To anyone who even slightly worships Lord visnu during its time, the month of Karttika gives residence in Lord visnu’s transcendental abode.”

“Lord Krishna is pleased by the offering of a single lamp during the month of Karttika. Lord Krishna glorifies anyone who lights a lamp for someone else to offer.”

“O tiger of sages, a person who during the month of Karttika hears the topics of Lord Hari becomes free from the sufferings of hundreds and millions of births.”

“They who during the month of Karttika bathe, keep an allnight vigil, offer lamps, and protect a tulasi forest attain spiritual forms like Lord vishnu’s.”