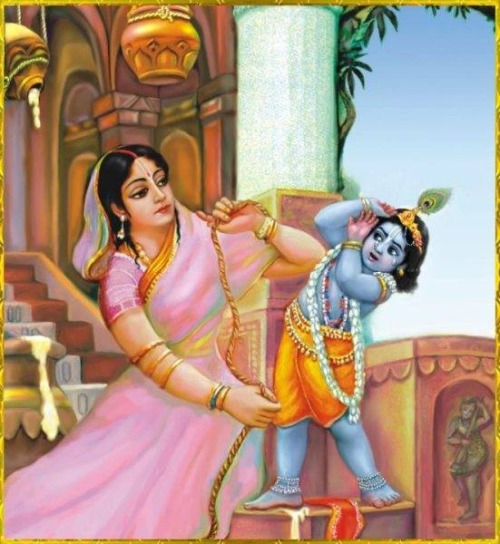 “So during Kartika month we can more easily obtain the favor of Radha. If Shri Radha recommends us to Krishna, we can be sure he will take notice”
Prabhupada speaks in the Nectar of Devotion (summary of the Bhakti-Rasamrita-Sindhu) about the power of performing devotional service during the month of Karttika:
“One of the most important of these ceremonial functions is called Urja-vrata. Urja-vrata is observed in the month of Karttika (Oct.-Nov.); especially in Vrindavana (Krishna’s place of “birth”), there is a specific program for temple worship of the Lord in his Damodara form. “Damodara” refers to Krishna’s being bound with rope by his mother, Yashoda. It is said that just as Lord Damodara is very dear to His devotees, so the month known as Damodara or Kartika is also very dear to them.
“In the Padma Purana it is said, “The Lord may offer liberation or material happiness to a devotee, but after some devotional service has been executed, particularly in Mathura (Krishna’s appearance place in India) during the month of Kartika, the devotees want only to attain pure devotional service.” The purport is that the Lord does not award devotional service to ordinary persons who are not serious about it. But even if such unserious persons execute devotional service according to the regulated principles during the month of Kartika, and within the Jurisdiction of Mathura in India, are very easily awarded the Lord’s service.
Although this speaks specifically of Mathura, and many devotees do go there for this special month, Mathura or Vrindavana can also refer to a holy place like a Temple where there are Krishna Deities present and pure devotional service rendered. Wherever there is consciousness of Krishna, and we perform devotional service for Krishna’s pleasure, we are greatly benefited, especially during this month.
Whatever your situation—even if you live far from a Temple–try to be Krishna conscious as best you can, and pray for the mercy of Krishna and his devotees. There will be special benefit during this month. That can be an impetus for us for this month, but the idea is to make our entire life, day after day, month after month, and year after year centered around devotional service so we can offer our whole life to Krishna. Then we will go to a plain where the only activity is Krishna bhakti, performed with love and devotion.
Devotees take special vows (vratas) to increase their spiritual practices. One activity they do during Kartika, which was given by Shrila Sanatana Goswami (the principle architect of our Gaudiya sampradaya who was empowered by Lord Chaitanya) is to chant the 8 verses found in the Padma Purana, the Damodarastaka prayers, and offering a ghee lamp or candle.
These prayers recount the lila or pastime of Krishna as a child being bound by his mother to a grinding mortar. And we learn the tattva (essential truth) of this lila and of Krishna consciousness in general. Although Krishna is the original form of God (sac-cid-ananta-rupam), he acted like an ordinary child, crying out of fear of being punished by his mother for his mischief. Devotees are not interested in worshiping Krishna in awe and reverence as is practiced to other forms of God—like Vishnu—but in worshiping Krishna in loving intimacy afforded by the form of Krishna.
Due to the devotee’s intense love for him, Krishna forgets his position as God. And for the devotee, after studying the scriptural knowledge of Krishna’s position as God and realizing it, he forgets that Krishna is God–a kind of Divine ignorance. This occurs so he can have more intimate love for him.
So for the remaining week of this month, if you haven’t already started, you can chant this prayer found on-line and in Krishna conscious song books (like those put out by the BBT), and try to increase your spiritual practices. Read the English translation and think deeply about the significance of the Damodara lila, and of the special nature of Krishna prema (love for Krishna) given by the residents of Vrindavana, like Krishna’s mother Yashoda. Chaitanya Mahaprabhu came to give this type of love of Krishna to the world, and the Krishna consciousness movement is meant to help its’ members develop it.