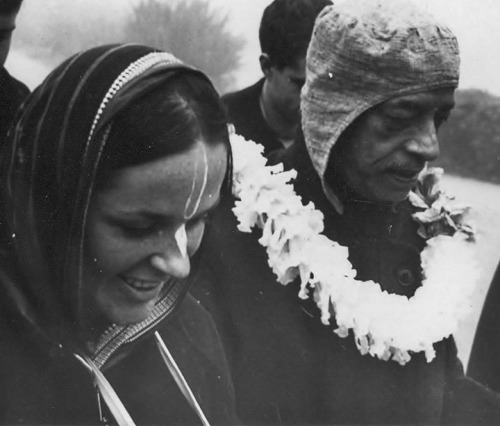 Yamuna Devi: Three Years Ago, on Janmastami, Lord Krsna’s appearance day, I received a copy of the diary Srila Prabhupada wrote aboard the steamship Jaladuta. It’s a personal account of his first journey from India to America. Though I had read excerpts in various publications, the full handwritten text revealed a richness I had barely realized before.
Often difficult to read, the cramped and sometimes blurry script describes dramatic events with life-threatening heart attacks, repeated illness along with personal observations and Srila Prabhupada’s daily routine. It also mentions two prayers he wrote to Lord Krsna while on the ship. I strongly recommend reading these inspiring verses. You can find them in Srila Prabhupada Lilamrta, Volume 2: Planting the Seed, by Satsvarupa Dasa Goswami.
As an avid student of Srila Prabhupada’s cooking instruction, I was particularly fascinated with entries in his diary noting some of the dishes he cooked and distributed to the crew members. In one entry Srila Prabhupada writes, “Today is the 32nd day of our journey from Calcutta. In the morning I couldn’t take my breakfast properly, then I cooked bati-chachari. It appeared to be delicious, so I was able to take some food.”
In other entries, Srila Prabhupada mentions nourishing dishes that serve as one-pot meals. For example, kicchari is a rice-and-legume stew that can take on new and varied faces for months on end. Kadi, often served with kicchari, is an aromatic yogurt gravy laced with vegetables, cooked beans, or savory dumplings. Chachariis a succulent char-flavored vegetable dish. It combines three cooking procedures in one pot boiling, steaming, and frying without your ever stirring the pot, not even once!
These dishes require no exotic ingredients, are easy to make, and, as was probably done aboard theJaladuta, need only be accompanied with hot wheat flatbreads or a salad for a simple meal.
Srila Prabhupada was a generous cook who taught in the kitchen by demonstration. The same dishes he’d cooked on the Jaladuta he taught in the next two years to his ISKCON students in New York and San Francisco. The dishes became instant favorites. In 1967 I compiled a book of these early recipes. I’d lost track of the book until, to my amazement, someone recently sent me the manuscripts in my original calligraphy. To remember and savor Srila Prabhupada’s Janmastami of 1965, observed aboard the Jaladuta, it seems apropos to pass on a few of these early recipes to you.
Kicchari
(Serves 4-6)
½ cup yellow split peas
1 teaspoon salt
1 teaspoon turmeric
1-2 dried hot chilies
7 cups water
1 cup long-grain rice
1 cup sliced carrots
1 cup sliced Brussels sprout
¾ cup cubed potatoes
melted butter or ghee
Combine the first 5 ingredients in a large pot and bring to a boil. Reduce the heat to medium, partly cover, and boil gently for 20 minutes. Stir in the rice and vegetables, reduce the heat to low, and cover. Cook slowly, stirring occasionally, until the water is absorbed and the grains are cooked, about 45 minutes. Drizzle with butter or ghee.
Kadi
(Serves 4-6)
1 cup chickpeas (garbanzo beans)
3 tablespoons chickpea flour
½ cup yogurt
3 cups buttermilk
½ teaspoon turmeric
½ teaspoon salt
2 teaspoons cumin seeds
¼ teaspoon crushed red chilies
2 tablespoons butter or ghee
Soak the chickpeas in water over-night and drain. Cook them in plenty of fresh water until tender, 1-2 hours. Drain.
Combine the flour and yogurt in a saucepan and stir the mixture until it’s smooth. Blend in the buttermilk, turmeric, salt, and chickpeas. While stirring, gently boil over moderate heat until thickened, 5-10 minutes.
To prepare the seasoning, place the cumin and chilies in a dry pan and stir-toast until darkened and fragrant. Add the butter or ghee, heat briefly, and pour the seasoning into the kadi.
Bati-Chachari
(Serves 4-6)
1 pound boiling potatoes, cubed
1 pound string beans, cut in 1 ½-inch pieces
1-2 whole red chilies
½ teaspoon turmeric
3 tablespoons butter or ghee
2 ¾ cups water
1 teaspoon salt
Place all the ingredients in a heavy-bottomed saucepan and bring to a boil. Reduce the heat to medium, partly cover, and boil gently until the liquid is absorbed and the vegetables are fork tender, about 25 minutes. Remove the lid, raise the heat slightly, and cook until the vegetables fry in the seasoned butter. (Do not burn the vegetables; only allow a deep brown crust to form in the pan.) Cover and set aside for 10 minutes. Then stir in the crust and serve.
Yamuna Devi is the author of Lord Krishna’s Cuisine: The Art of Indian Vegetarian Cooking.
July 1st, 1991 | Category: Lord Krsna’s Cuisine, Volume-25 Number-04, Yamuna Devi Dasi

Tags: jaladuta, janmastami, krishna, lord, on, the
E-mail me when people leave their comments –
Follow