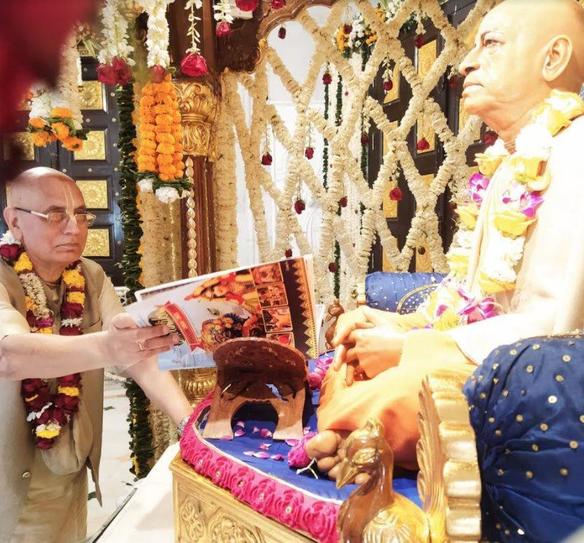 ISKCON Ujjain celebrated the 15th anniversary of its temple inauguration on 25th February 2021, Nityananda Trayodasi, the day of the divine appearance of Lord Nityananda.

On 10th February 2006, the beautiful temple of Their Lordships, Sri Sri Radha Madan Mohan ji, Krishna Balarama and Gaura Nitai was inaugurated in the auspicious presence of many GBCs, sannyasis and senior devotees of ISKCON. HH Bhakti Charu Swami Maharaja had constructed this beautiful marble temple in a very short time of 9 months and 20 days, which is an unbeatable record in itself. Some people say just like the time a child takes to get shaped in the womb of a mother, this beautiful temple took shape in the heart of Ujjain in garbha-kala.

The devotees at ISKCON Ujjain celebrated this day with great pomp. 10 senior devotees including 8 Srila Prabhupada disciples spoke on this day about the glories of Lord Nityananda and their memories during the inauguration of the temple in 2006. On 24th Feb, a grand Nagar Sankirtan was organized in the city of Ujjain in which devotees from India, Russia, Ukraine and Nigeria led ecstatic kirtans. It was followed by wonderful cultural programs in the temple for the pleasure of Sri Sri Gaura Nitai.

After lockdown this was the first festival celebrated physically where many devotees participated very enthusiastically. The deities were decorated with wonderful flower dresses. HG Mahaman Prabhu also launched the Avantika Magazine and a book entitled “Srila Prabhupada – The Lord and Master of Heart” and offered them to Srila Prabhupada. This book is a collection of Vyasapuja offerings and diary entries of HH Bhakti Charu Swami Maharaja.

This year 2021 marks the 125th Aniversary of Srila Prabhupada and we celebrated an Online Mega Youth festival, ‘UDDIPAN: Illuminating Youth Against Addiction’ as an offering to His Divine Grace Srila Prabhupada. More than 10,000 people participated in this 3 days online webinar on “The Life lessons from Ramayana” by HG Gauranga Prabhu and HG Amogha Lila Prabhu. The winners of the event will be rewarded with Rs. 1 Lac as 1st prize, Rs. 21,000 as 2nd prize and Rs. 11,000 as 3rd prize. Apart from it there are 1000 consolation prizes also. In Madhya Pradesh this was one of the largest religious online gatherings of youths. The government of Madhya Pradesh also appreciated the endeavor very much. We got support from the following departments.