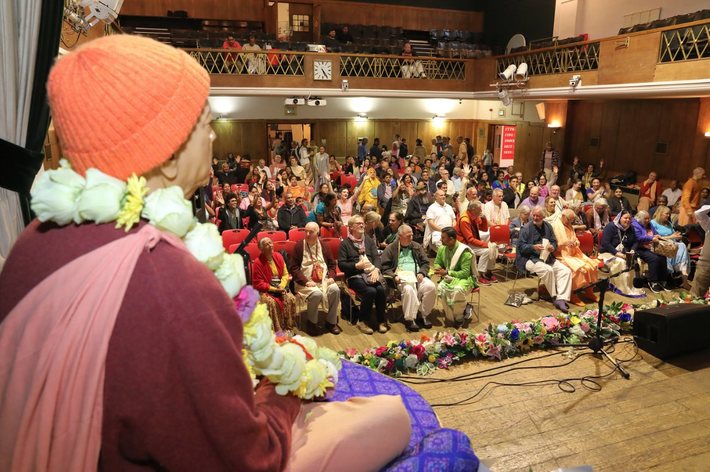 The annual ISKCON-London Volunteers Dinner honours all the devotees who have offered service during the past 12 months. For 2019, being the Golden Anniversary, all devotees who had offered service to Sri-Sri Radha-Londonisvara over the last 50 years were invited. The assembled guests were therefore blessed with the association of many Srila Prabhupada disciples and senior sevaks.

The venue for the event was Conway Hall, where Srila Prabhupada had given a series of lectures in 1969. Guests were welcomed and given a gift bag containing a wooden layered photograph of Sri-Sri Radha-Londonisvara and Their altar. Bhajans were led by Krishna Club, while a creche was provided so that all could enjoy the evening in full.

Srila Prabhupada came from his temple Vyasasana to be personally present and the assembled devotees offered Guru Puja to His Divine Grace. Srila Prabhupada then led the Mangalacaran prayers before giving excerpts from one of his 1969 lectures during the course of the evening. Another of his lectures at Conway Hall had been used for the introduction to Sri Isopanisad and one of his disciples had brought an original copy of the book with him.

An interactive session on the 26 Qualities of Srila Prabhupada was then held. Groups of guests sat with his disciples and heard how he had exhibited them.

Temple President Jai Nitai then led a series of appreciations which began with a standing ovation for the early pioneers. Long-serving devotees Maha Nrsingha Dasa and Murli Manorhara Dasa (the latter whose birthday it also happened to be) were then honoured with large canvas prints of Sri-Sri Radha-Londonisvara. Devaki Devi Dasi and Bhakta Dhaval were mentioned for their work in co-ordinating the volunteers, and successful recent out-reach events were reflected on. The focus then went to the forthcoming 50th Anniversary celebrations and a trailer for a video “50 years of service” was played.

Devotees were next treated to a delightful drama on The Creeper of Devotion before Srila Prabhupada concluded his lecture and an ecstatic final kirtan was held. The evening was of course rounded off by a sumptuous prasadam feast.