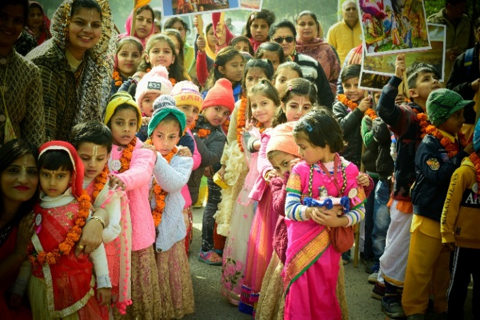 By the blessings of our founder-acarya, His Divine Grace A.C. Bhaktivedanta Srila Prabhupada, and his loyal disciple, Lokanath Swami Maharaja, the ISKCON Greater Noida devotees recently organized a one-day padayatra for their young Vaisnavas.

On January 19, 2020, a cold Sunday morning, the padayatra by little Vaiṣṇavas and Vaiṣṇavis took place for the pleasure of Sri Sri Gaur Nataraj Dayal Nitai and to spread the sankirtan movement, the specific mission for which Lord Krishna appeared personally in Navadvipa as Sri Krishna Chaitanya Mahaprabhu 534 years ago. About seventy children took part in the event.

Purnanandi Radha devi dasi, Ram Bhakti devi dasi and Radhika Pran dasa took charge of the planning and execution of this yatra under the guidance of Atul Krishna dasa and Rasraja Gaur dasa.

After the inaugural arati of the utsav deities of Sri Sri Nitai-Gauracandra and Srila Prabhupāda, and motivational words by Atul Krishna, the padayatra procession started at 10.15am from Jagat Farm, a shopping market at Gamma-I in Greater Noida. All the Vaiṣṇavas and Vaiṣṇavis walked in two lines with a banner held aloft by two little Vaiṣṇavas in front followed by a little Vaiṣṇava carrying the deity of Srila Prabhupāda and another carrying Sri Sri Nitai-Gauracandra deities on his head. One child led the kirtan and the children playing mridanga and karatals were followed by all the other little Vaiṣṇavas. Every one of the boys was wearing Vaisnava attire, a beautiful flower garland and sandalwood paste smeared on his forehead, while the young Vaiṣṇavis were dressed as gopis.

The matajis of the Bhakta Prahlād School ensured that the children and infants in the procession stayed in line to maintain safety in traffic. More than forty senior matajis participated in the padayatra. A police team from the nearby precinct of Gautam Buddha Nagar supplied protection through the entire walk. Their support was highly appreciated, especially when negotiating roundabouts and crowded marketplaces.

The devotees loudly chanted and sang the holy name of the Lord, providing the procession with a pure atmosphere filled with transcendental sound vibration, blessings and spiritual energy as passersby had darshan of Their Lordships Sri Sri Nitai-Gaurcandra and Srila Praphupada.

A group of little Vaiṣṇavas distributed pamphlets about the daily and weekly programmes conducted at ISKCON Greater Noida. Another group, including some senior devotees, distributed Bhagavad-gita As It Is in English and Hindi and small books by Srila Prabhupada. Halwa and banana prasadam were distributed along the way, which was accepted with respect. People purchased the books and took invitations to attend regular spiritual programmes in ISKCON Greater Noida. When the padayatra passed through the marketplaces, many shopkeepers and customers came out raising their hands in appreciation and devotion and chanted the Supreme Lord’s holy name. Some devotees were holding colourful flags representing auspiciousness and prosperity and others held posters of Lord Krishna’s forms and pastimes and posters of Srila Prabhupada. An enthusiastic little Vaiṣṇava, Vaibhavi, held a donation box and went door-to-door and among the general public requesting any small amount. No one declined him, as rickshaw drivers, shopkeepers and passersby were happy to donate at least two rupees for the service of Their Lordships.

The padayatris walked a total of 5km, passing through two other Greater Noida shopping areas, Rampur Market in Beta-I and Omaxe Connaught Place Mall in Beta-II. Generous devotees in Beta-I, Bhakta Harish Agrawal and Madhavkanta mataji, offered prasadam for all padayatra devotees at their house. As the padayatra reached the Greater Noida temple the congregation devotees greeted Their Lordships Sri Sri Nitai-Gauracandra and Srila Prabhupada by showering baskets of flower petals from the first floor of the temple, dancing, singing and playing various musical instruments. The public in the Delta-III neighbourhood stood mesmerized by the spectacle.

Kirtan was led by a little Vaiṣṇava named Govinda, the son of Badarayana dasa. Devotees assembled in the temple were relishing the nectar of the holy name and begging for the mercy of Sri Sri Nitai-Gauracandra and Narasimha deva. Spiritual bliss permeated the atmosphere and everyone in the temple was singing with raised hands calling out Hare Krishna Hare Krishna Krishna Kṛiṣhṇa Hare Hare / Hare Rama Hare Rama Rama Rama Hare Hare.

We presented gift packs to all the little Vaisnavas and special awards for the devotee children who served during the padayatra. In the Jivadaya category, the award was given to little Alisha for her book distribution and wonderful kirtan. In the Vaiṣṇava seva category, little Aaradhya got the award for her ecstatic kirtan and dance. In the Vaiṣnava attire category, Master Shiva got the award for being traditionally dressed. Bhakta Shubha was handed the Nama-ruchi award and Bhakta Akshyay got the Vaiṣnava seva award for carrying Sri Sri Nitai-Gauracandra on his head throughout the padayatra. In the Jivadaya category, an award was given to Vaibhavi for ecstatic kirtan and dance and for distributing eleven books. And finally, Atul Krishna gave return awards to all children aged four to nine who participated in the event. After receiving their award, every child offered obeisances to Srila Prabhupāda and Sri Sri Nitāi-Gauracandra as the devotees clapped and loudly chanted Haribol, Haribol, resonating to the rhythmic beat of a mridanga.

The padayatra culminated in the distribution of sumptuous prasadam to the assembled devotees and guests. The effort, enthusiasm and sincerity of many devotees made the occasion grand, providing spiritual nourishment to everyone. Anupam Krishna dasa and Bhakti Viharini mataji drove the backup cars during the yatra to carry tired kids and elderly devotees. Aja Balarama dasa and Revti Vandana mataji purchased flowers and made garlands for each padayatri. Radha Vinod dasa, Badarayan dasa, Achintya Govind dasa, Bhakta Manoj Kumar, Bhakta Ajay Tiwari, Ram Bhakti mataji, Ayodhya Lila mataji, Namashradha mataji and Bhaktin Ruchi all sponsored halwa, fruits and other items.