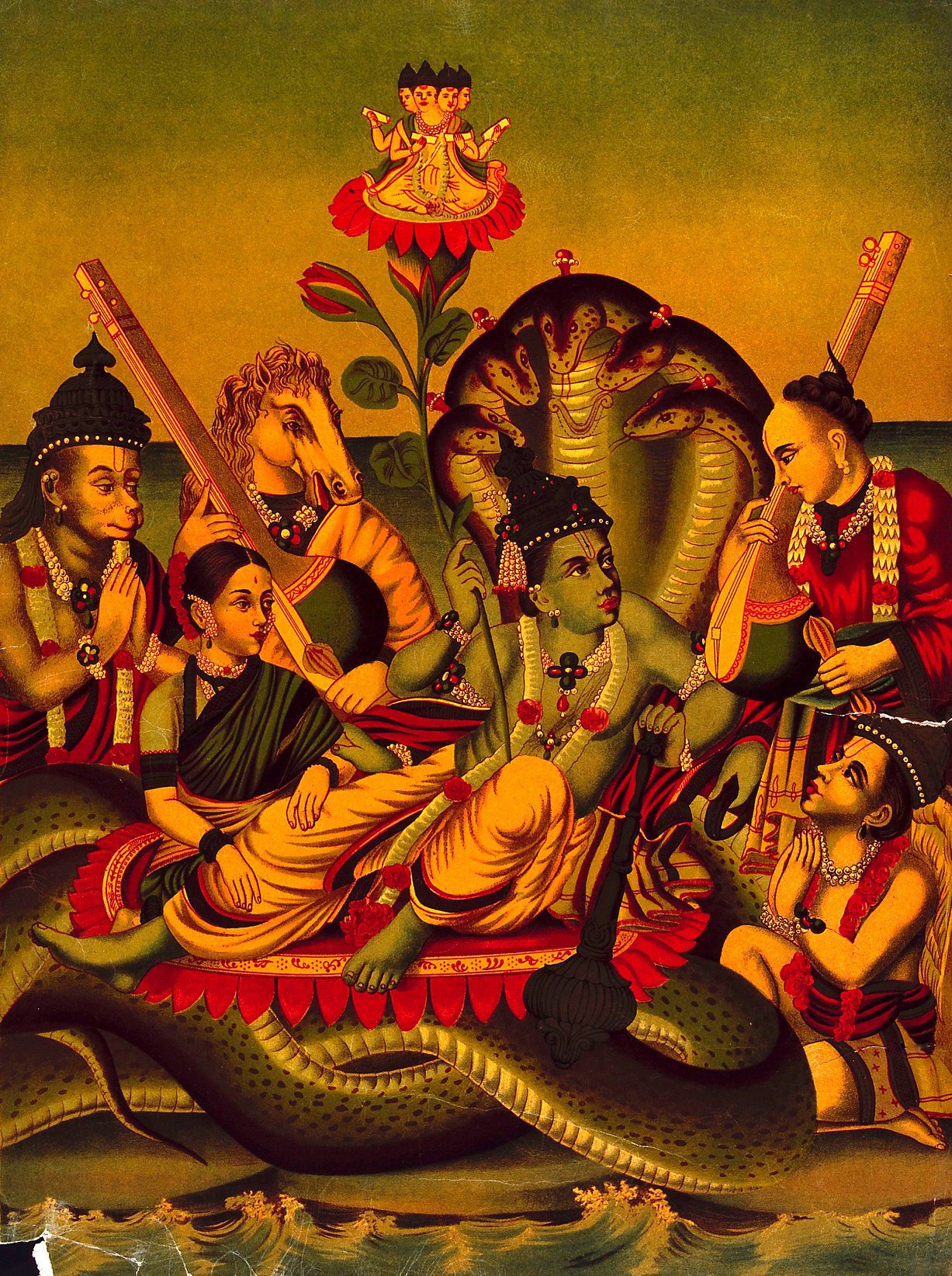 How would you feel if your parents are partial towards your sibling? Would you be comfortable when your teacher is biased towards your classmate? It is natural to expect from one’s superior or guardian a similar treatment as one’s equals receive. Any discrepancy in that leads to disappointment. Perception of partiality is painful and could demotivate people and slacken their spirits. What if one sees partiality in God?

Isn’t God Equal to All?

Yes. God is equipoised. He is the eternal father of all living beings. The Supreme Lord Krsna says in the Bhagavad-gita that He is the ultimate source, shelter, sustainer and well-wisher of everyone in the universe (BG 9.17-18). Every living entity is His part and parcel or amsa: mamaivamso jiva-loke (BG 15.7). Thus He loves everyone as His child and hates no one. However, He also says that He is especially inclined towards His devotees!

Krsna says, “I envy no one, nor am I partial to anyone. I am equal to all. But whoever renders service unto Me in devotion is a friend, is in Me, and I am also a friend to him.” (BG 9.26)

But He Shows Favoritism!

Lord Krsna descends into this world in various incarnations to revive dharma, protect the devotees and annihilate the miscreants. If God is equal to all, why should He protect His devotees and punish the demons?

To favor the demigods, the Lord incarnated as Varahadeva and killed a great demon named Hiranyaksa. He later took the form of Nrsimhadeva and killed the demon Hiranyakasipu. To reinstate Indra as the king of heaven, the Lord appeared as a dwarf brahmana named Vamana and took away the kingdom of Bali Maharaja by cheating.

When the demigods and demons churned the milk ocean (samudra-manthan), nectar appeared. At that time, the Lord came in the form of a beautiful woman Mohini-murti and cheated the demons and gave all the nectar to the demigods. He even beheaded he demon Rahu who tried to drink the nectar in disguise. Thus several times the Lord cheated, subdued or killed the demons and showed His favoritism towards the demigods. He is therefore known as sura-priya.

Why Is this Disparity?

This difference in treatment is not exactly God’s partiality, but His reciprocal nature. Some expect God to fulfill their material desires and some expect to be one with Him. But some selflessly serve Him with no expectation in return. Lord Krsna says in the Bhagavad-gita (4.11) that He reciprocates with people according to the mood in which they approach Him (ye yatha mam prapadyante tams tathaiva bhajamy aham). That is why different people achieve different results although their endeavor seems similar.

Human eyes see the external endeavor but divine eyes see the attitude behind the endeavor and reciprocate accordingly. This, however, cannot be called as God’s partiality.

One who is influenced by the three material modes (gunas), namely goodness, passion and ignorance (sattva, raja and tama) exhibits partiality on a material plane. The Lord is transcendental to these modes (nirguna) and is beyond the dualities of happiness and distress. He is self-sufficient (atmarama) and doesn’t derive happiness from the demigods. He is fearless (nirbhaya) and doesn’t get distress from the demons. So, He has nothing to achieve by favoring the demigods or destroying the demons. Thus He need not be partial like ordinary selfish materialistic people.

In the case of Samudra-manthan, Srila Sukadeva Gosvami says

“The place, the time, the cause, the purpose, the activity and the ambition were all the same for both the demigods and the demons, but the demigods achieved one result and the demons another. Because the demigods are always under the shelter of the dust of the Lord’s lotus feet, they could very easily drink the nectar and get its result. The demons, however, not having sought shelter at the lotus feet of the Lord, were unable to achieve the result they desired.” (SB 8.9.28)

One who is satisfying the Lord gets His special mercy and attention while others don’t. Srila Prabhupada writes, “Any activity performed for the Supreme Lord is permanent. As a result of such activities, the performer is immediately recognized. The only distinction between materialistic activity and spiritual activity is that material activity is performed only to satisfy one’s own senses whereas spiritual activity is meant to satisfy the transcendental senses of the Supreme Personality of Godhead.” (8.9.29 Purport)

Isn’t it natural for anyone to reciprocate with others according to the way they approach him or her? If someone treats us respectfully, we also give them respect, and if they mistreat us, we may stay away from them or even tend to speak or act against them as the case may be.

For instance, a teacher in the classroom gives the same lecture to all the students without discrimination. But if some students are more eager to learn and approach the teacher with relevant inquiries on the subject, the teacher becomes especially happy with them and explains to them more. On the other hand, the teacher scolds or even punishes a mischievous student. This is not the teacher’s partiality, but a natural response towards the students’ behavior.

Similarly, although the Lord is equal to everyone, He gives more attention to His surrendered devotees. This favoritism is not His fault, but His ornament. Lord Krsna is specially inclined to His devotees because they approach Him with devotion, sincerity and service attitude. They seek His shelter and depend on Him.

No! God hates no one. God disapproves the nefarious activities of demoniac people, but He never disowns them. He endeavors to rectify their mentality and He is willing to forgive their misdeeds, but He never interferes with their little independence.

Srila Prabhupada writes, “Why does the Supreme Personality of Godhead permit sinful activities? The Supreme Lord does not want any living being to act sinfully, and He begs him through his good conscience to refrain from sin. But when someone insists upon acting sinfully, the Supreme Lord gives him the sanction to act at his own risk (mattah smrtir jnanam apohanam ca [Bg. 15.15]). No one can do anything without the sanction of the Lord, but He is so kind that when the conditioned soul persists in doing something, the Lord permits the individual soul to act at his own risk.” (SB 5.18.3 Purport)

Lord Krsna supported the Pandavas in the battle of Kuruksetra against the evil Duryodhana. But at the end of battle, when Duryodhana lay on the ground with his thighs broken, Krsna was not happy to see him so. Srila Prabhupada writes, “The fall of Duryodhana, the leading son of Dhrtarastra, was not pleasing to the Lord, although He was on the side of Arjuna and it was He who advised Bhima how to break the thighs of Duryodhana while the fight was going on. The Lord is constrained to award punishment upon the wrongdoer, but He is not happy to award such punishments because the living entities are originally His parts and parcels. He is harder than the thunderbolt for the wrongdoer and softer than the rose for the faithful. The wrongdoer is misled by bad associates and by ill advice, which is against the established principles of the Lord’s order, and thus he becomes subject to punishment. The surest path to happiness is to live by the principles laid down by the Lord and not disobey His established laws, which are enacted in the Vedas and the Puranas for the forgetful living entities.” (SB 3.3.13 Purport)

Lord Krsna tried several times to give good advice to Duryodhana and rectify his vile mentality, but Duryodhana was bereft of all fortune due to the ill advice of Karna, Duhsasana and Sakuni. Similarly, when Ravana kidnapped Sitadevi, Lord Ramacandra gave him several opportunities to return Sita and save his life, but Ravana was so stubborn. Ultimately Rama had to kill Ravana. Sisupala was envious of Krsna and always blasphemed Him since childhood. Krsna tolerated him several times, but finally beheaded him with Sudarsana cakra when he crossed his limits.

God wants to rectify the mentality of miscreants, but when they become too adamant, He punishes or kills them, not out of revenge, but to liberate them from their demoniac mentality.

A New Dimension of Equality

When a child is well behaved, the mother appreciates or hugs him. But when the same boy does some mischief, mother chastises him. Both are expressions of her love, although one appears pleasant and the other seems harsh. Mother’s dealing with the child is tuned to the mood and the need of the child, but her underlying emotion is love. The same holds true in God’s case.

When God is strict with some people and punishes them, that is only out of His compassion upon them. When He kills a demon, He is just liberating him from demoniac life. Thus the Lord is the well-wisher of everyone, and He shows compassion on different people in different ways as per their condition. Though apparently Krsna punishes or kills the demons, He looks for reasons to show them His causeless mercy and liberates them. Putana’s case is one such example.

“Alas, how shall I take shelter of one more merciful than He who granted the position of mother to a she-demon [Putana] although she was unfaithful and she prepared deadly poison to be sucked from her breast?” (SB 3.2.23)

Even if one thinks of Krsna with anger or envy, by such constant thinking one gets liberated by His mercy. Then what to speak of lovingly remembering Him and serving Him. When the mind is somehow or other fully absorbed in Krsna, the material part is very soon vanquished and the spiritual part— attraction to Krsna—becomes manifest. Therefore the Bhagavatam says that one should always focus one’s mind on Krsna somehow or the other (tasmat kenapy upayena manah krsne nivesayet). The Lord’s causeless mercy in liberating both the devotees and the demons clearly distinguishes Him from ordinary living entities.

Attitude is Greater than Magnitude

Even in the case of the devotees, the Lord is not partial towards those devotees who do more service and neglect others who do less service. He accepts the mood in which a service is done (bhavagrahi janardana). For Him the attitude behind the service is more important than the magnitude of the service. Lord Ramacandra was equally pleased with Hanuman who was bringing huge boulders and a small squirrel who was bringing some grains of sand for the construction of the bridge across the ocean.

In this world, some people are rich, some are poor; some often suffer and some enjoy more. The suffering people often compare themselves with others and say that the God is partial. They blame God for their misery, while the happy people ignore God in their enjoyment. This shows people’s tendency to claim credit for their happiness and blame God for their distress. However, mature devotees see both distress and happiness as God-sent as a result of their own past deeds and do not blame God as partial.

The Lord is not partial to anyone, but just reciprocates with the moods and deeds of people. He is specially inclined to the devotees because they love and serve Him with all their hearts. He is merciful to the demons as well, but owing to their negative attitude He punishes them mercifully only to uplift them. In either case He is the supreme well-wisher of every living being as a loving father.