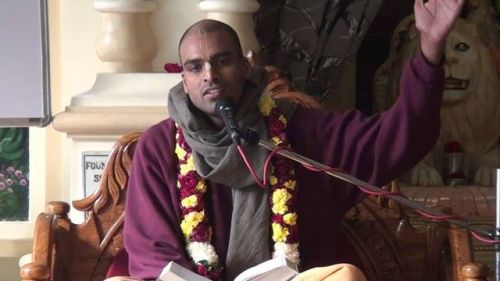 This shows that it is easier to embrace old age and death than it is to give up the false ego.

The Lord not impressed with the Precetas 10,000 years of austerities in the water as much as He was by their friendly cooperation.

So many demons came to Vrindavan but actually, they did not cause as much trouble as Brahma and Indra, the demigods.

In Brhad-Bhagavatamrita, Brahma said although both he and Indra caused distress to Krishna in Vrindavan, he caused more distress by separating Krishna from His devotees, the cowherd boys.

What to do to cooperate better?
At least be friendly to each other.
Engage in the six kinds of loving exchanges.
Each individual must be overcoming their anarthas [unwanted qualities].
Each must understand the importance of the mission.

Fifteen years ago we started having all the brahmacaris eat meals together in the brahmacari ashram, and that act had great impact improving the devotees’ relationships.

It is our job to encourage the other devotees to purify themselves.

Jayananda Prabhu visited a devotee who had left the temple and worked in a butcher shop, and ignoring his blood-stained apron, Jayananda gave him a hug, and that devotee said later that he came back only because of Jayananda’s loving interaction.

Internal discord is our greatest enemy.

Disunity in the leadership is especially bad.

Leadership has to have sensitivity and spirituality in addition to strength. In the Pandavas, Bhima had strength, Yudhisthira had sensitivity, and Arjuna had spirituality.

In leadership in a diverse group, here is a strategy: We have respect everyone. We have to agree on a course of action. We have to cooperate to carry out the action.