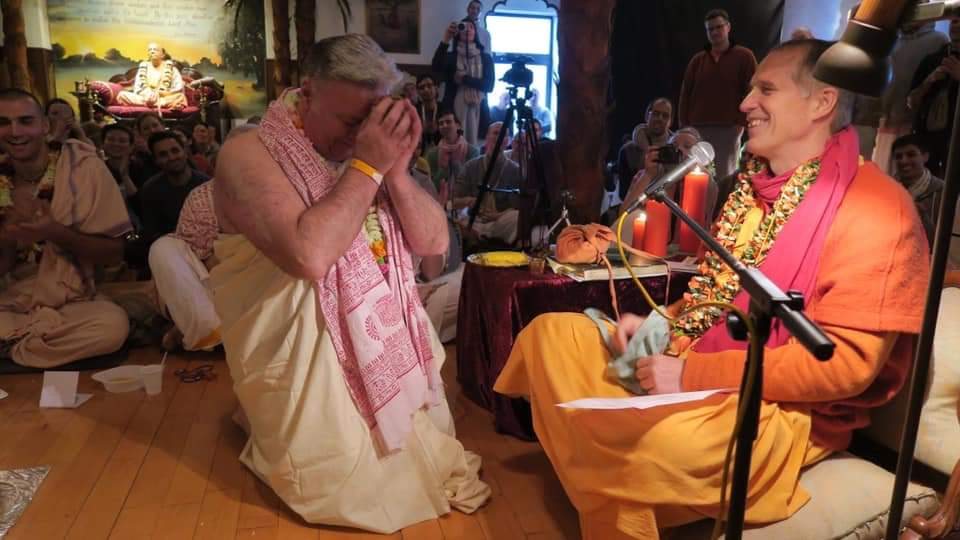 Today we are remembering Govinda Hari Dasa, who was known to most people as Igor Spasov. He was a very sincere servant of Krishna, the devotees and mankind.

I first met Govinda Hari during a big public program in Serbia where thousands of people came to learn about the Krishna Consciousness and the chanting of the Holy Names. At that time, Govinda Hari was a well-known TV Host. He inspired many of his professional contacts to film such public programs and broadcast them. In this way the programs came to the awareness of the general public. Due to his efforts, Krishna Consciousness soon became well-respected in the countries where these TV broadcasts were seen. Later Govinda Hari made documentaries about devotees.

Govinda Hari first started as a host on TV, and then became my personal host in Belgrade. Whenever I used to visit Belgrade, he would graciously host me in his apartment. During those times, I had many opportunities to associate with him, discuss with him and explore the depths of the Bhagavad-gita. I always found Govinda Hari to be extremely curious and eager to learn more. In this way our relationship became more and more personal.

Soon I began to see that he took the world of Krishna Consciousness to be more important than the world which he was famous and praised in. This character trait continued throughout his life on this planet. There was no doubt in Govinda Hari’s mind about the reality of Krishna and the need to bring people into contact with what they had forgotten – their original spiritual consciousness. During our meetings Govinda Hari would often present exciting ideas about documentaries. Even when he was in Prague – teaching young students at University (the art of videography) – he would always slip Krishna Consciousness in. He would bring his students to the Govinda’s Restaurant and talk with them about Krishna. I heard that even during the present crisis of the Coronavirus, Govinda Hari played music outside from his balcony so that people from his apartment building and the street could hear. And he chose “My Sweet Lord” – by George Harrison – where the Hare Krishna Maha Mantra is prominently sung.

Today in honour of such a wonderful devotee, we made a little ceremony and sang the Holy Names for Govinda Hari – which were so dear to him. We prayed to Krishna that He takes His servant forward on his way back to Him. And as I was singing I remembered these and many more services, discussions, walks, how we laughed at the banks of the Danube, how he had organised halls and venues for programs, and one time, I remember he organized even a big ship where all devotees could experience Krishna Consciousness and then share this with others.

Govinda Hari Dasa is a very dear disciple of mine. I am still under the shock. When Madhva Muni Dasa told me this afternoon about the news of his departure – I could not believe it. However, although I am shocked, I will pray that Krishna will take this wonderful devotee into His loving embrace. I request all devotees, friends and relatives to pray that Govinda Hari’s journey will take him to where he prepared to go during his time with us. Without such devotees, the world is a little darker. Let us honour him by helping to make the world a brighter place – while we are still here.