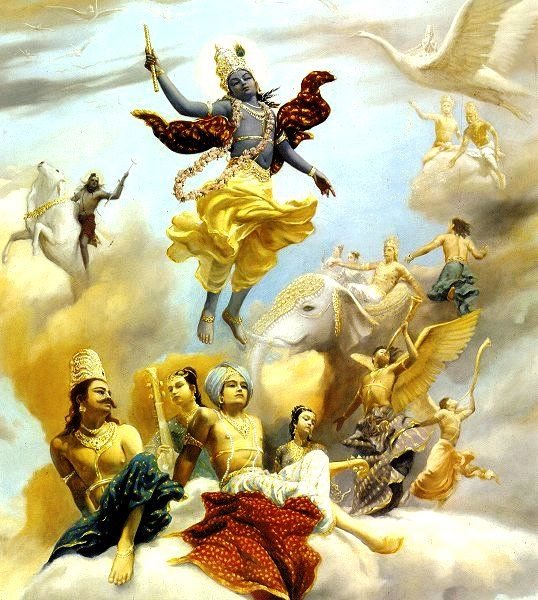 If time is relative, what about space? How to make time go slowly, or faster?

Most of us live constantly busy, living with the idea that there is not sufficient time. It would not be nice if we could stretch and contract the time at will, getting more time to do things we want, making pleasurable moments last for an eternity, and painfully experiences pass in a moment?

The good news is that time is relative. Time works differently in different parts of the cosmos. It can be stretched or contracted practically infinitely. That’s a point where modern science and Vedic literature agree.

According to the theory of special relativity by Einstein, the flow of time can change by speed or gravity. Someone traveling near the speed of light, or living very close to a strong gravitational field (like a black hole) would age much slower than someone living here on the earth. This can be empirically tested by sending clocks to space: a clock installed in a satellite orbiting the planet runs at a faster pace than an identical clock in the ground.

Similarly, the Vedic literature explains that what is one year for us, is just one day for the demigods in swargaloka. It’s not that they just have longer days: they really perceive the time differently. Similarly, what is 4.3 billion years for us, is just a day for the inhabitants of Brahmaloka. Their lifespan equals trillions of years of our time.

On the other hand, time passes faster in the lower planets. In the hellish planets, that are situated at the bottom of the universe, time passes so slowly that a 100 years there equals to just one day of our time. That’s another reason to try to not go to hell: not only the conditions are not so pleasant, but also the time passes very slowly!

Higher beings not only perceive time in a different way, but they also perceive space differently from us. The 5th canto of Srimad Bhagavatam includes a description of the universe according to the perception of the demigods. We can see how much their higher dimensional universe is different from the gross dimension we can perceive with our senses. What is very far for us, is just a vimana drive away for the demigods. They can go from one planetary system to the other just like we go to the supermarket.

As one’s consciousness evolves, he gains access to higher realms of reality and we become less constricted by time, space and physical laws. However, everyone in the material world is constricted to some extent.

The only one that is not restricted in any way is Krsna. As he mentions in the Gita: kalo ‘smi. Time is one of His energies, and just as all the other energies, time is completely under his control. He can make a night extend for the equivalent of a whole day of Brahma when he is dancing of the gopis, or can make the whole period of the life of Brahma as short as a breath in His form of Maha-Vishnu. He can also manipulate the physical laws at will, like when He lifted the Govardhana hill.

Just like the demigods see the universe differently from us, Krsna has a much higher perception of reality than even the demigods, just like he displayed when he evoked all the Brahmas of different universes in the presence of our catur-muka Brahma. As the creator and controller of the whole material creation, Krsna has complete control over it, just like a programmer has complete control over his own software.

All the experiences that there are to experiment in this material world are already created and happen cyclically. It’s just like a computer game, where all the events in the game are individually created by the developer and showed in a certain order to the player, creating an illusion of continuity. The player can’t change the order or speed of the events, but the developer has complete power. Similarly, Krsna is not under the control of space, time or any physical law. Just the opposite: he is the one that calls the shots.

As long as we are in this material world, we are not only under the influence of time, but also constricted in other ways. For example, in a game the player can’t leave a certain area, there are only certain ways he can interact with other players, certain actions he can perform and so on.

Similarly, reality appears to us in a way that limits our activities. For example, our planet is round, so we can’t leave it. If one tries to escape the planet by walking, he will just end-up going back to the same place. Not only are we imprisoned by these different forces, but our knowledge of reality is very limited.

There is only one place where people are not constricted: the spiritual world. This is the place where there is no time. Everything is eternal, all Krsna’s pastimes exist eternally and we have access to the according to our meditation, or according to the influence of yoga Maya.

There is a place where there is no past or future. Everyone just lives in an eternal present, centered in their desire to serve Krsna. This is the place we can attain as soon as our consciousness is sufficiently purified. Vrindavana is not a geographical location, but a state of consciousness. The inhabitants of the spiritual world are continuously absorbed in this eternal present of constantly chanting Krsna’s names and always glorifying the Lord. As we become absorbed in our services, we have the opportunity of connecting with this eternal present.

So, time is relative. Time flows at different rates in different parts of the cosmos, and there is a place where time does not exist at all. If time is relative, what about space? It happens that space is also relative!

For example, when Krsna was present on this planet, he manifested the whole Vrindavana, the whole spiritual sky inside the boundaries of the earthly Vrindavana, that have a circumference of a few dozen miles. It’s difficult for us to understand how an infinite space can fit into a finite space, but by Krsna’s will it became possible. As he says in the Gita, pasya me yogam aisvaram: “Behold my mystic opulence!”

Krsna’s bending of space was also shown in the pastime of Brahma stealing the calves. At a certain point, he summoned the brahmas of all universes. Every brahma was present in his own universe, just like our Brahma was situated in our universe. In the Vedic literature we get the information that the different material universes are trillions of miles apart. Still, all the brahmas were put together by Krsna’s mystic potency.

These are examples that can be observed in this material world. If we go to the spiritual world, things become even more amazing. In the spiritual world, space (as a limiting factor) doesn’t exist at all. All the inhabitants can freely go from one place to the other simply by thinking. Everything is just one remembrance away! Similarly, in the spiritual sky there is no matter that needs to be manipulated, and consequently no physical laws. Anything can be created simply through thinking, out of one’s own consciousness. The gopis doesn’t have to spend hours cooking in front of the fire manipulating different substances to make a preparation for Krsna. Whatever they want to cook, is created simply by their meditation.

We can understand that just as matter, both time and space are a phenomenon that affects only conditioned souls. Although time and space can be defined as real in the sense that someone created and someone is experiencing it, both are actually ephemeral, not more real than a game running on a computer. We become attracted to this ephemeral manifestation simply because of our own foolishness. Self-realized souls are capable of seeing things in the proper perspective, and thus they become indifferent to this phenomenal world.

So, accepting the idea that both time and space are relative, and thus illusory, what is real? Actually, the only thing that is real is consciousness. The reality is simply a manifestation of consciousness. By changing our consciousness we can (literally!) change our reality. One with the appropriate consciousness can travel all around the universe, like Narada Muni, or even reach the spiritual sky, without even having to leave his body! Even Druvasa Muni, an ordinary mystic that is far from being a pure devotee was able to do that, going all the way up to the Vaikunta planets.

From this, we can see that although expressed in simple language, the Vedic literature brings us ideas that go much further than the most far-out science fiction. The universe is much bigger and more mysterious than we can imagine, and the key to unlock its mysteries is the purification and expansion of our own consciousness.