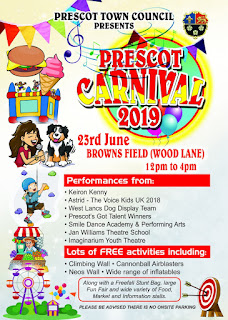 I met a man who lives in Prescott and works for the carnival.  Gaura, the driver, decided to pull over the van for a catch-up nap.  We were in Morrisburg, along the St. Lawrence River, when I met this friendly man who used to play the role of a clown in circuses and carnivals.
"Do you know what's the difference between a circus and a carnival?" he asked.
"No!"
"In the circus they keep the animals in the cages.  In the carnival, they run the rides," he said with a chuckle.  He then got curious.  "Are you a Hare Krishna monk?"
"Yes, I am. You know about us?"
"All religious folks are good.  You just have to watch out for the gypsies.  I'm a gypsy."  Another chuckle.
One of those gorgeous Loons was playing close to the river's shore where we were as we kept talking.  I couldn't help noticing him.
"As a carnival man, do you do this seasonally—in the summer?"
"No, we go to Florida in the winter, and do the circuit there.  It's pretty much year-round."  We made friends.  He made his brief stop-over like Gaura and I did in this piece of paradise along the river.  It's a privilege to break up your travel with a snack perhaps, a nap and a stroll by a river.
As Gaura and I reconvened our journey toward Montreal, we had some good chats.  The word ‘Gypsy’ came up again.  That is essentially my lifestyle, one of a gypsy, a good one I hope, at least a nomad.
Source: http://thewalkingmonk.blogspot.com/2019/08/tuesday-august-13th-2019.html
Tags: bhaktimarga swami, blog, blogger, the wisdom park
E-mail me when people leave their comments –
Follow