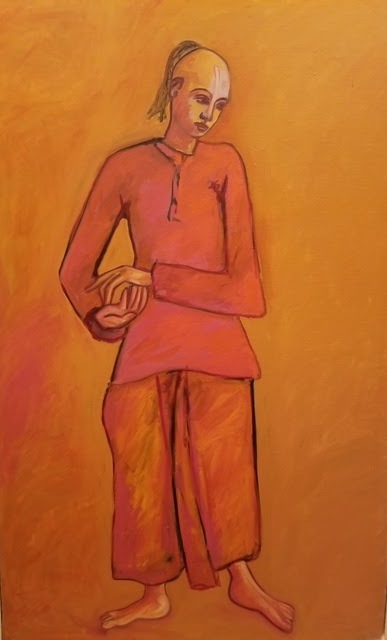 It was nippy but nice.  The sun was strong and people were cheery going down, or up, Yonge Street.  I took to the west side of the street, going north, because that's where the sun was angled.  I was doing my usual routine with Bhativinode from Scarborough.  He would pick me up as soon as he spotted me in my standout saffron.  Off we went to the ISKCON Centre for one of those rituals, a devotional spectacle called abhishek, a bathing of deities using pure substances, including honey, which are then poured over the beautiful icons of Chaitanya and Nityananda, the two godfathers of kirtan.
I had a chance to speak to the modest-sized group.  Not everyone came.  People are scared to be in public venues,  including spiritual spaces.  I spoke again about corona.  "Now is the time for going inward, for doing what soaps and sanitizers can't do, for what mantras can do—nurture the soul…Mind you, we need both internal and external cleaning."
Later on, I spoke for forty minutes online, the topic being ‘Corona and Karuna’ which translates as ‘No Mercy and Mercy’.  That broadcast was to replace the Sunday Open House talk in front of our usual crowd in Toronto.  It was a first time to talk to a camera only.  https://www.facebook.com/174452304502/videos/256603548684299/
A highlight for today: someone came and donated a large painting of a Krishna monk, rendered in April of '73.  It's just after the time I joined, when our ashram was on Gerrard Street.  The artist is Godfrey.  I love it.
Source: http://thewalkingmonk.blogspot.com/2020/03/sunday-march-15th-2020.html
Tags: bhaktimarga swami, blogs, blogger, the walking monk
E-mail me when people leave their comments –
Follow