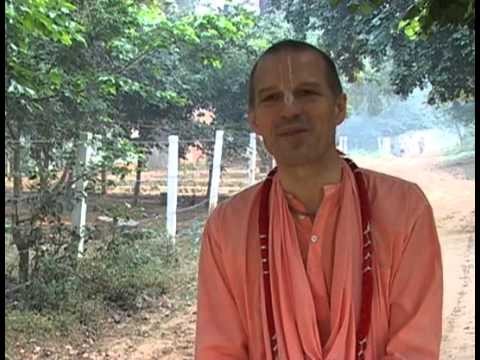 One may ask why Indra was so angry? There are 1000s of Indra yajnas all over the world. No one in the Svarga has ever seen him so angry. Though he has 1000 eyes he was blinded and could not see Krsna. The intoxication that blinded him was not wine or honey, but false ego.

The moment you are proud, you lose your vision.

In the words of the Bhagavatam, “the earth appears spinning due to one’s spinning his eyes around” – that happens due to pride. Pride comes from a form of lust.

Maybe that would be interesting to the ladies, if they wander here, how to recognize men infected with lust.

Judging from Indra’s reaction we can clearly see he was not a Supreme Being. In the Bhagavatam there was a test (Bhrgu Muni was chosen) to find out the person who is the Supreme – one who is not in need of respect. That is how the test was designed. If you are needy of respect, if you are a swami or a guru and needy that others pay you obeisances. If you are a senior devotee and need a special seat to feel integrated properly – it shows you want the poisonous food of respect.

Bhrgu approached first Brahma without offering obeisances. But Brahma, much more qualified than Indra, just swallowed his anger. Bhrgu could guess his mind only. Then Bhrgu approached his brother Siva who came with stretched arms, but Bhrgu decided to be even more rough and stopped him, “Stop, brother, have you taken your bath today?” Sages were around, but Siva also lost his temper and chased Bhrgu with trisul, if Parvati had not stopped him, that would be the murder of Bhrgu.

Then Bhrgu Muni decided to go to Vaikuntha. The gates were heavily guarded, but as a renowned brahmana he was just waved throught. So he went directly to Visnu’s room and kicked Visnu in His chest. “You are always sleeping, how indecent”. Lord Visnu immediately got up and said, “O saint, I am so sorry, you must have hurt your foot.” Then he put Bhrgu on His throne and started pressing Bhrgu’s feet to relieve any possible pain. In ecstasy Bhrgu returned to Sarasavati, dancing, “I have found the Supreme Lord”. … Indra said, “These abhiras deserve suffering. In the end everyone finds reasons for what he does. Indra called the clouds and winds, “”Only after Krsna has suffered seeing all the Vrajavasis die, only then I will kill Him also”.

Krsna is time and He desires to destroy all the obstacles for devotees. Especially pride.

Once I told you a story about a king asking a minister, “What is God’s daily work?” … Then priests were asked…. Finally a shepherd, seeing a fleeing, asked the priest about the question… “Let me give the answer”. Before answering the kings question, the shepherd said, “First I have to correct the incongruity, you are sitting on the throne and asking me a question as a teacher, so we need to change seats”. Boiling king did, and the shepherd said, “That is the constant work of God, being done right now: He puts the proud people down, and humble people up”.

Let’s go back to Vraja. The Vrajavasis were frightened! No one could see a path any longer in the darkness. … “Yes, this is Indra’s revenge! Tell Krsna to call Giriraj and let Giriraj help” – that is what the Vrajavasis felt.

Gargamuni gave a prediction, “By Krsna’s grace all the difficulties will be crossed”. They all turned to Krsna and chanted one mantra. I would like all of us to chant it:

SB 10.25.13 [The cowherd men and women addressed the Lord:] Krsna, Krsna, O most fortunate one, please deliver the cows from the wrath of Indra! O Lord, You are so affectionate to Your devotees. Please save us also.

Weak people take shelter in other people and things, medical arrangements. We have medical Braj care. In an interview one old devotee said how he was attracted to Vrindavan, then Radha-kunda – “But don’t you need a blanket, medicine” – “Don’t you think that after I have taken shelter at Radharani’s feet, I will lack something”.

We were awe-struck how the poor widows said, “Since we have taken shelter in Srimati Radharani, we are completely peaceful and have no worries”.

Only a person who has found _shelter_ will be easily agitated. Look at Indra!

Looking shelter is the main focus of this Govardhan-katha, but now let’s go back to the Vrajavasis.

Let us do an exercise. Do you have a problem. No, it is not very good to focus on problems. Let us chant. … Let us practice this here at Giriraja’s lotus feet. “I have a problem of turning away from you for so many lives, now I am looking for your shelter” … Hare Krsna Hare Krsna, Krsna Krsna Hare Hare Hare Rama Hare Rama, Rama Rama Hare Hare … Are you still in the mind? Or are you already in the fortress of the Lord’s shelter… Please sing taking full shelter in Giriraj. … Like many who tried, if successful, you might have felt … Sadhana is very important, but more important are the blessings of the residents of the dhama. … I would like you to take just one word with you into the day: SHELTER. The Vrajavasis were in the dark attack of Indra and his Samvartaka clouds, but they found shelter in Krsna.

The full recordings (without my mistakes, omission, and miscomprehensions:-) will be available at http://vihe.org under “Audio”, in a few weeks time.

Begging for your kind blessings, on behalf of your servants at VIHE, Das Adi Purusha

Source: http://www.dandavats.com/?p=84960
E-mail me when people leave their comments –
Follow