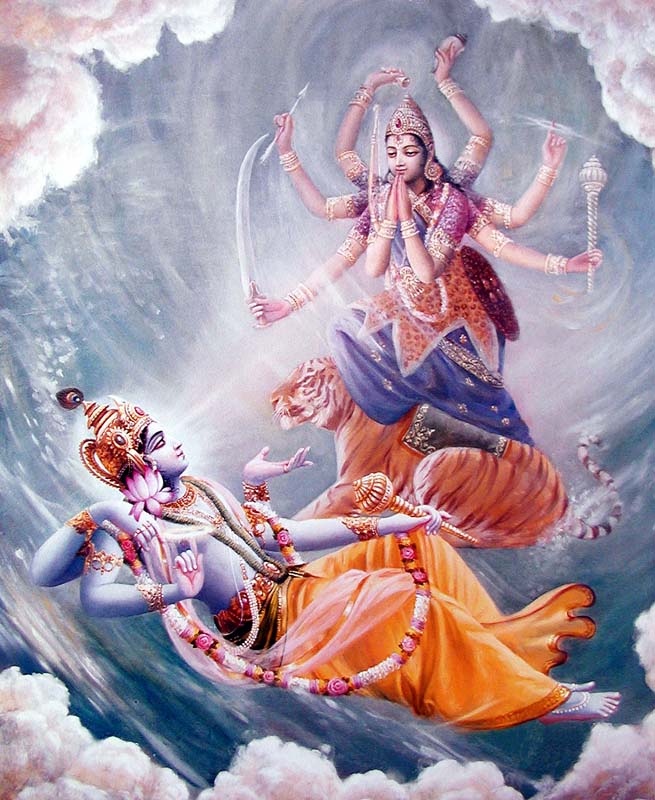 Candidasa was a devoted worshipper of Goddess Durga while his brother was a pure Vaisnava who would worship Shaligram. Candidasa was rich but his brother was poor. Candidasa had a very big and beautiful garden, he used to offer the flowers from the garden to Durga Devi. His brother too desired to offer these beautiful flowers to his Shaligram. And once he mentally offered a beautiful and colourful flower of the garden to his Shaligram. And it so happened that on that day Candidasa offered the same flower to Goddess Durga. As soon as the flower was offered Durga Devi appeared in front of Candidasa. “I am extremely pleased with you Candidasa. What benediction you want?” Candidas was surprised, “I worship you daily but why are you so pleased with me today.” “It is because you have offered me the flower which has been offered to Shaligram i.e. Lord’s maha prasadam. By seeing that prasadam flower I became pleased, so I appeared before you.”

Candidasa immediately inquired, “Is it that you get pleased when one worships the Supreme Lord Krishna.” Goddess Durga in a compassionate voice said, “Yes, the Supreme Lord is the cause of all causes and He is the original source of all creation. I get extremely pleased when anyone worships the Supreme Lord Krishna. So if you want to please me worship the Supreme Lord, Krishna.” Candidasa understood the ultimate truth and he became a great devotee of Krishna and this pleased Goddess Durga, the consort of Lord Shiva. Candidasa later composed many songs in which he described the transcendental feelings of separation of Srimati Radharani and Krishna. Chaitanya Mahaprabhu would love to hear the composition of Candidasa.

Who is Goddess Durga?

The hladini potency transforms into the personality of Goddess Durga in this material world. Here she has the responsibility of reforming those souls who have rebelled against the laws of the spiritual land and have come to this mortal material world.

This world which we call wonderful and delight to live in is compared to a prison. Here life is uncertain, misery is inevitable, relationship is temporary and death a certainty. As prisoners are given a uniform, similarly we have been given a uniform – uniform of a human body, animal body, plant body etc. And as long as we have this ephemeral body made of flesh, bones, mucus, blood etc. and we are in this material world we are under the jurisdiction of Durga devi. She on behalf of the Supreme Lord takes complete charge of this material world, she acts under the direction of the Supreme Lord just as shadow follows the substance.

The unwillingness to live amicably with the family and friends of the spiritual world make us unfit to be part of the spiritual world. Once imprisoned in this mortal material world, we forget our original constitutional position and start considering ourselves as one of the material products. So, we suffer terribly under the influence of the material modes owing to this unholy contact. The vicious cycle of birth, old age, disease and death perpetuates our miseries.

In fact the more we identify ourselves with this material world and the material body, and the more we endeavour to enjoy in this ephemeral world the more we suffer. The Supreme Lord never wants any of His children to get illusioned by the external energy and suffer in this world. The Supreme Lord is compelled to sentence the spiritual beings to the material prison house so that he learns his lessons and get reformed. A doting father sometimes has to put his disobedient child under the care of a strict teacher so that his child gets disciplined. Even the external energy who is a devotee of the Lord does not like to inflict suffering upon us. It’s a thankless task for the external energy but she happily assists the Supreme Lord so that the rebellious souls get reformed. The actual disease which is the cause of all the sufferings for all the living beings in this world is because of being illusioned by the external energy of the Lord.

Carrying her trident she looks for the rebellious souls

Like a loving mother, Goddess Durga continuously gives a clarion call to all the forgetful souls to return back to the kingdom of Krishna. But the stubborn souls who desire to enjoy independent of the supreme Lord and loves to disobey the laws of Krishna needs to be punished. And Durga carrying her trident looks for such rebellious souls to punish them. The trident which she always carries with her represents the threefold material miseries-adhytamika (miseries due to our body and mind), adibautika (miseries due to other living entities) and adidaivika (miseries due to natural calamities). Without any exception everyone at every moment suffers due to one, two or all the three of these miseries.

One of the most celebrated incidents related to Goddess Durga is her killing the demon Mahisasura with her trident. Mahisasura also symbolically represents our demoniac mentality and Durga through the sharp edges of her trident strikes hard to vanquish our evil mentality. The purpose is not to punish us but to make us understand that the more we go away from Krishna’s spiritual care the more we suffer in this world. She always tries to tell us, “This isn’t your home. Go back to your original home. Krishna is waiting for you.”

Her chastisement forces a soul to eventually think, ‘Although I explored all means to enjoy but why suffering always follows me like a shadow. Why am I forced to be in a womb for nine months in an upside-down position in complete darkness? Why I get diseased? Why I am growing old? Why every moment someone is dying? Although I don’t want to die but why I am not allowed to live here forever.”

Durga being the energy of the Supreme Lord can never be conquered or fooled. She is extremely powerful and when she strikes with her trident then nothing can save us. Durga Devi can give us material benediction but with it comes tons of sufferings. The only way to escape from Durga’s powerful trident is by promising her that we don’t want earthly pleasures but we seriously want spiritual happiness. And as soon as we start endeavoring for it by practicing loving devotional service to Krishna, Goddess Durga is delighted, she immediately withdraws her trident and showers her love upon us. She doesn’t want to imprison us in this world forever. And those who are imprisoned she wants to release them as soon as possible.

She tests our dedication to the Supreme Lord, she checks if our heart has been thoroughly purified of all material diseases such as lust, greed, pride, anger, envy, illusion and false ego. and when she finds that our heart has developed deep love for Krishna then she immediately releases us from this prison house. It is explained that in this age of Kali Yuga, the Supreme Lord incarnates with all His powers and all His opulence in the sound vibration of the Holy Name, “Kali kale Naam rupe Krishna Avatar.” So the best way to practice devotional life is by chanting the holy names of Krishna like the Hare Krishna Mahamantra. We should chant this mantra with love, with devotion and with determination. Goddess Durga, the guardian of this world, will assess our dedication and our intention regularly. She even tested Haridasa Thakura’s devotion to Krishna. And Haridasa Thakura passed the test with flying colours because he used to be completely absorbed in chanting the Hare Krishna mahamantra, in fact he had taken a vow to chant the mantra 3 lakh times a day. If we too want to please mother Durga then we have to become serious in our devotion to Krishna.

(Purushottam Nitai Das is a member of congregation at Iskcon Kolkata. He works in IBM as an Advisory Consultant.)