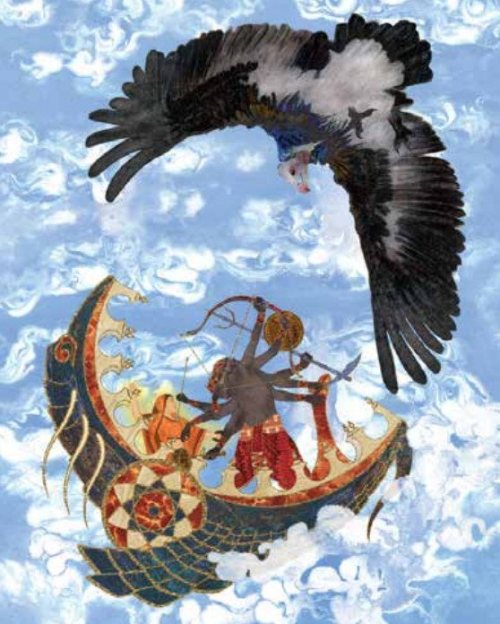 If we had a rand for every time we felt discouraged and aimless in our spheres of livelihood, we would probably be well-off by now and ready to take early retirement. Srila Prabhupada explains that everyone has a prescribed duty according to the four social dispositions; namely the priestly, warriors, merchants, and labourers. Those who properly perform their prescribed duties as an offering to God “live peacefully and are not disturbed by material conditions.” Thus they achieve the highest perfection of life. To see the truth behind this precept we learn from a scene in the life of the great vulture king, Jatayu. Jatayu was an outstanding devotee of Lord Rama. When the demon king Ravana abducted the beautiful princess Sita, the consort of Lord Rama, he escaped with her on his flying chariot drawn by magical mules. The chariot rose to the sky in the forest of Citrakut, where the great vulture lived. Sita saw Jatayu settled on a large tree and called out to him. Exclaiming she had been seized by the vile king, she told the learned bird not to try to fight Ravana because he was old and Ravana was too powerful. Instead, she urged him to quickly find Lord Rama.

But Jatayu immediately called to Ravana, telling him of his rank as a king and a devotee of virtue. He would not allow him to leave with Sita. The great bird flew to the chariot while reproaching the demon king. Keeping pace with the chariot, Jatayu spoke loud enough to disturb Ravana’s mind, reprimanding him that his heinous act would bring his death. Infuriated, Jatayu finally challenged the evil-minded king.

Hearing this, Ravana swerved his chariot and rushed angrily at Jatayu. He dealt many blows, which the great bird swiftly avoided and retaliated with his sharp talons. Their clash caused great tumult. Ravana aimed vicious arrows at Jatayu, devastating his body. Ignorant to the wounds, Jatayu rushed to Ravana, piercing him with his beak and claws. Back and forth, both combatants were impressive until Jatayu, although determined to serve His Lord, became weary owing to the demon’s youth and consistent attacks. The vulture king, his wings and legs lopped off, lost formidably.

Although Jatayu was old and meagre, his strength to fight fiercely didn’t come from his own physical power but from his devotion. The duty of acting in such steady meditation appears difficult. Jatayu followed spiritual principles with great determination therefore he was empowered by the Lord.

At the sight of his defeat, Sita sped to embrace Jatayu and acknowledged him for sacrificing his life in attempt to rescue her. The demon king, being inconsiderate by nature, usurped the princess of Mithila back onto his chariot and fled the forest for Sri Lanka.

Later, Lord Rama along with his brother, arrived at the scene. Lord Rama saw his dear friend laying wounded, nearly lifeless. The anguished Lord embraced the defeated Jatayu and celebrated his earnest endeavour with heartfelt words. He was indebted to Jatayu for his great service and assured him that he will attain elevation to the spiritual world.

Sincerity in our intentions is what ascertains our success. Jatayu teaches us that when our mood is selfless and we carry out our prescribed duties for the pleasure of the Lord, we gain His merciful favour. Radhanath Swami explains that from a material viewpoint, the great vulture lost the fight but because of the sincerity in his intent he achieved the highest victory – God’s eternal association.