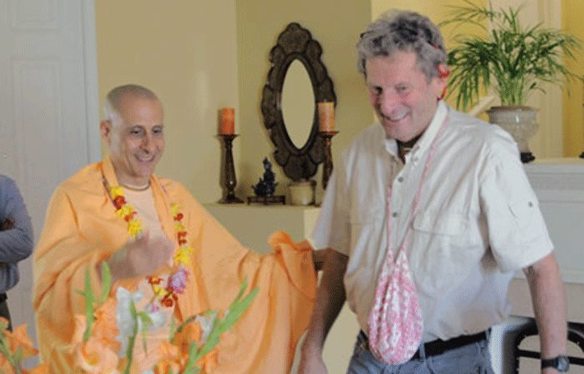 Question: I have heard that Bhakti Yoga helps us to give up bad habits. But how exactly does it work?
Radhanath Swami: My dear godbrother, Shyamsundar, he is an example of how bhakti can transform a heart, to help us give up very difficult habits.
In 1967, Srila Prabhupada asked Shyamsundar to carve the deities of Lord Jagannath, Baladev and Subhadra from the little model that they had. He was in his room working, very, very hard. One day, Srila Prabhupada came into the room to examine how the deities were, and he saw on Baldev’s head a pack of cigarettes. He was smoking cigarettes as he was carving the deity of Jagannath! He didn’t want to, he knew it was wrong, but he just couldn’t give it up. So, Prabhupada looked at the pack of cigarettes and he smiled. He said, “What is this!” Prabhupada just hit the pack of cigarettes with his cane. And he said, “Do you want one little stick of tobacco to stand between you and Krishna, God?” Prabhupada had such compassion.

You take the name of God, you pray to God, and you follow the process of Bhakti. And as Padma Purana and Rupa Gosvami explain – the power of bhakti is, it actually pulls out the root of the weed of sinful desires, removes the cause of these addictions and fills our heart with loving service to the Lord.

Within a matter of a week, Shyamsundar gave up smoking of cigarettes. Something that was so difficult became so easy. Why? Because he replaced it with something higher – ‘param dristva nivartate’. This is the teaching of the Bhagavad Gita. Unless you experience a higher taste, it’s very difficult to continually be able to give up our lower conditional habits.