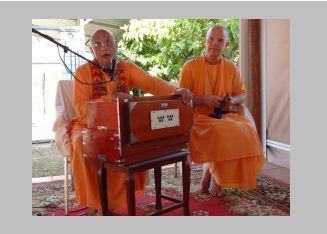 Please accept my humble obeisances.  All glories to Srila Prabhupada and his most beloved son Bhakti Charu Maharaja!

Bhakti Charu Maharaja was a true touchstone. Whoever came in contact with him was given an opportunity to experience a life-changing transformation. I experienced the magic of his presence for the first time in 1979 when we met in Calcutta. He was in charge of the local BBT office, and thanks to our common service as translators of Srila Prabhupada’s books, we immediately connected as brothers in arms, exchanging our realizations.

Above all the wonderful qualities he embodied, it was his sweet and caring personality that captured my heart. Over the years this appreciation grew ever stronger, and it reached its culmination in 2004 when he was the first person to call me after my eldest son had suffered an accident and was hovering between life and death. Just to hear Maharaja’s soothing voice and consoling words provided relief in those extreme circumstances.

A few days later, after my son had succumbed to his injuries, Bhakti Charu Maharaja called me again. As soon as I heard the tender tone of his voice, tears started to well up in my eyes, and I began to weep. “It’s alright”, he said softly, “you can let it all out; it is only natural to cry when we lose a person very dear to us.” But at the end of the conversation, his concluding words cut through the fog of gloom and grief: “In times like this, we realize that there is actually nothing besides Krishna consciousness.”

I can still hear his voice uttering those words, but now my heart is broken again. That very same person, a very dear and well-wishing friend  – not just to me, but to everyone – has suddenly left us. Although my intellect tells me that there is nothing to lament – vaisnavas don’t die but continue to live in sound –, my heart does not want to hear such words. It simply wants to weep. So, I let it weep. It’s alright.

But at the end, Maharaja’s conclusion will have to prevail: “Actually, there is nothing besides Krishna consciousness.”

But where do we find Krishna consciousness? We find it in devotees like Bhakti Charu Maharaja who are transparent via mediums because they carry Krishna in their purified hearts and let Him shine through wherever they go. As Prabhupada says in the Sri Caitanya-caritamrta (Adi 13.5): “Krsna is described to be like the sun. The supreme powerful is the Supreme Personality of Godhead Sri Krsna, or Lord Sri Caitanya Mahaprabhu, and His devotees are also bright and illuminating because they reflect the supreme sun.”

Thus, when such devotees leave, it appears as if the world had gone dark. In such moments of confusion and painful separation the only light of hope is the remembrance of their vani presence. Because it is, of course, true: Vaisnavas don’t die but continue to live in sound. As Srila Prabhupada points out in the Concluding Words in Caitanya-caritamrta: “Physical presence is sometimes appreciable and sometimes not, but vani continues to exist eternally. Therefore we must take advantage of the vani, not the physical presence.” After Prabhupada’s departure in 1977, that was our only solace. And it will continue to be so, until we are allowed to join him again. Meanwhile vani will fill the void.

Bhakti Charu Maharaja’s departure has also left a terrible void. In his physical absence, his vani will give solace. And there is great hope that in the not too distant future we will be able to join him again. After all, he is waiting for us under the umbrella of Srila Prabhupada’s lotus feet.