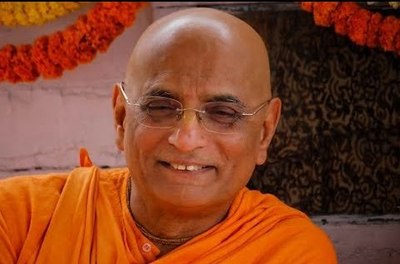 IN GLORIFICATION OF HIS HOLINESS BHAKTI CHARU MAHARAJA

Can you picture our dear Vaisnava gentleman His Holiness Bhakti Charu Swami as a sword wielding, eye for an eye, tooth for a tooth, general on the battlefield, a courageous soldier in the thick of battle, waging war on behalf of ISKCON? A more predominant view of Maharaja is one who is a source of inspiration, refuge, and hope. However, as I reflect on my recent GBC Executive Committee service with Bhakti Charu Swami, an instance of such a military persona stands out vividly in my mind.

At a crucial juncture in the recent attempt to hijack the Brooklyn temple, it became a legal necessity to publically remove the revolting officers of the temple. The time and place chosen for the GBC offensive was the Brooklyn temple Sunday Feast program when the largest number of congregants would be present. We knew that these circumstances heavily favored the recalcitrants, yet an open confrontation was unavoidable.

Someone from the GBC had to go into this hostile atmosphere, seize control of the situation, publically announce the removal of the temple president, and thus restore GBC authority. His Holiness Bhakti Charu Swami volunteered for the assignment.

Entering the temple and commandeering the microphone Maharaja made the required pronouncements. Immediately there arose an outcry from the temple leaders and their supportive audience. Undaunted, Maharaja continued with the GBC message. An attempt was made to remove the microphone from Maharaja's hand. Maharaja was able to retain control and immediately began a boisterous kirtan which lasted for half an hour and defused the opposition. Maharaja then triumphantly departed from the temple room having accomplished the GBC objective. The temple authorities and their lawyer called the police, but it was too late as they arrived subsequent to Bhakti Charu Maharaja's important strategic victory. Indeed, this incident helped to turn the tide in the struggle to regain both legal and physical control of the Brooklyn temple.

Our dearmost Vaisnava friend *was* a courageous firebrand in defense of Srila Prabhupada's ISKCON. He could, and did, do it all in Srila Prabhupada's service whether it be preaching to friend or chastising foe. Whatever challenges he faced he met by calling upon the unlimited well of sincerity which is his heart.

I salute him as he departs to his next assignment and pray to one day again be his comrade in arms.