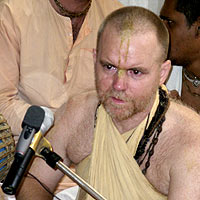 H.G. Aindra Prabhu has returned to Godhead today morning at 7.15 AM. He was found doing dandavat in front Goura-Nitai, his personal Deity, whom he worshipped. A devotee, who always helped him to serve his Deity, tried to open the door today morning, but Aindra Prabhu never turned up. The door was broke opened by the devotees and found Aindra Prabhu left this world forever to Goloka Vrindavana doing dandavat before the Supreme Lord. May he ever dwell at peace in Goloka and sing the glories of Radha-Krishna and enjoy His wonderful pastimes.

Aindra Prabhu was a disciple of Srila Prabhupada and was in charge of the Twenty four-hour kirtan at ISKCON Krishna Balaram Mandir as ordained by Srila Prabhupada. His sincere devotion and commitment generated pure spiritual atmosphere in the temple and strengthened perfect devotion in the minds of all visitors of this holy abode of Lord. May your chants remind you of Vrindavan and the blessings of Radharani and Syamsunder be with you forever. We cherish your glories always in Vrindavan and may you live in the memories of all the devotees of Vrindavan. May you be ever absorbed in the glorious pastimes of Radha-Krishna reciting His holy names:

H.G. Aindra Prabhu received Harinama-diksha in 1973 from A.C. Bhaktivedanta Swami Prabhupada in Washington D.C. For many years he served as a puiari at the temple and regularly engaged in harinama-sankirtana and book distribution. After several visits to Vrindavan Dhama, he was inspired to revitalise the 24 hour kirtana which was originally started in 1975 at the Krishna Balaram Mandir. In 1986, Aindra Prabhu arrived at Vrindavan to live here permanently and since then he coordinated and led the 24 hour kirtana and his wonderful devotional kirtana records spread and far and wide the ethos of joy in the hearts of several devotees.