What is Hariyali Teej?

Hariyali Teej is a festival celebrated in Shukla-paksha in the month of Shravana (August) during the rainy season. In 2010, Hariyali Teej is celebrated on 12 August. Hariyali relates to green and teej represents three. It means that the green festival is celebrated on the third day of Shravana. At this season, the fields turn lush green and the festivity is an invitation to prosperity. Some people regard it as a harvest festival. Hariyali Teej is often recognised as a festival for women to have relief from their busy household duties. Women clad in colourful dresses and ornaments and adore their hands with beautiful mehandi patterns. The preferred colour on this day is green. Special puja is offered to Moon, the lord of bushes. The colourful gaiety will be enlivened by gatherings, traditional songs, dances, worship in temples, and sumptuous feasts. The festival is known as Singhara Teej and Shravani Teej as well.

In Vraj, Hariyali Teej is celebrated every year in the midst of the brief rainy season when the land enjoys the respite from the blistering heat of summer. All around Vraj, the fields and forests will be blessed lush green and beautiful blossoming flowers with the sweet music of the chirping of birds and humming bees. Swings will be hung on the temples of Vrindavan for the Deities to enjoy, and therefore this festival is called Jhulan-lila. The lilas of Radha and Krishna are sung in the temples here and it is believed that They enjoy the swing and songs in the enchanting gardens of Vrindavan on this day. At Barsana Dham, decorated swings with green leaves and colourful flowers are hung for the Divine Couple to enjoy. Large crowds visit the Bankey Bihari Temple at Vrindavan. Various songs of rasa-lila are sung and special pujas are conducted every year. The lilas of Radha and Krishna are narrated. The Bankey Bihari Deity is moved out of the temple and specially adorned with colourful dress for the visitors to have an open glace at the Lord. The golden swing too is brought out, decorated with green leaves and flowers, and the Deity is placed on the swing to commemorate Lord’s wonderful lilas at Vrindavan. 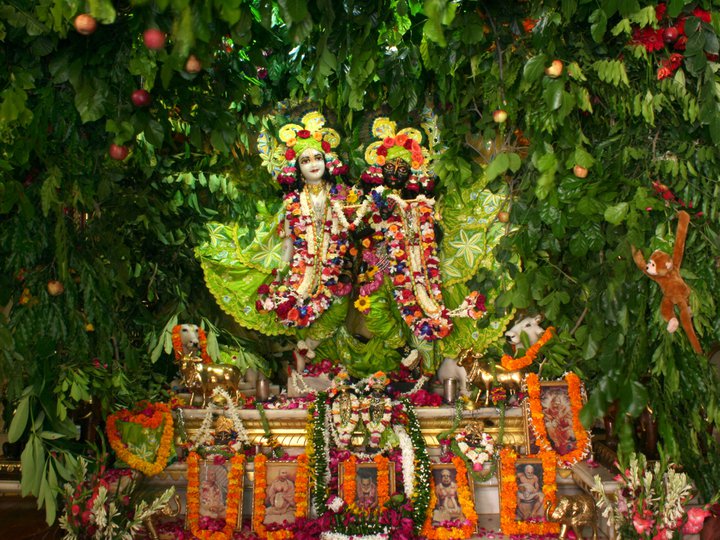 In the ISKCON Krishna-Balaram Temple at Vrindavan, the sanctum sanctorum of the Deities are beautifully decorated with green bush leaves and blossoming flowers for Them to feel pleasure-roam in the lush green forests of Vrindavan. When the Temple opened for darshan-aarti at quarter past seven in the morning, the devotees wondered to witness the Deities in the thick of the forests of Vrindavan five millenniums ago. They looked around astonished, but the surroundings still seemed usual. Returned to senses, they realised it as the gesture of mesmerising decoration than floating in the dream of togetherness with the sweet love of Radha and Krishna. The exquisitely decorated Deities felt like enjoying the charm of the flowery season and They appeared more cheerful. Devotees in large numbers visited the Temple to have darshan of Radha-Shyamsundar, Krishna-Balaram and Gaura-Nitai. Thanks to all those who actively participated to decorate the Temple and its wonderful living Deities.