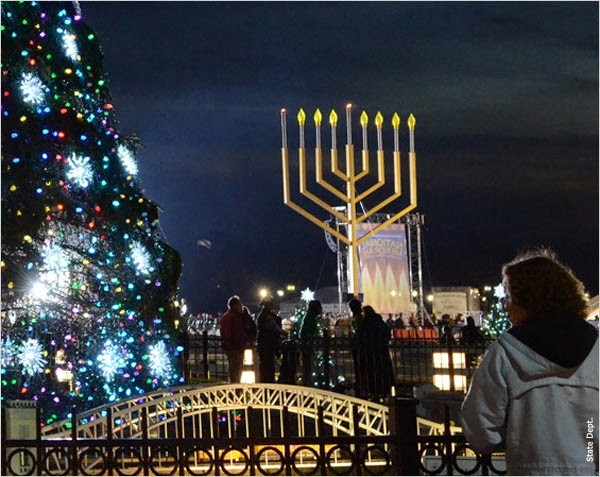 In the West this is the holiday season, with Christmas and Hanukkah both coming up. As Srila Prabhupada explained, the Lord comes to this world to enlighten people with transcendental knowledge. Sometimes He comes personally, and sometimes He sends His son or His prophet or His representative, but they all come with the same message. They may speak in different languages according to the circumstances and the audience, but the essence of the message is the same: God is great; we are but small parts and parcels of God, meant to serve Him with love; we have come from God and are meant to return to Him.

One of Srila Prabhupada’s purports in the Bhagavad-gita As It Is contains a statement that relates to the holidays people in the West are about to celebrate:

“The avatara, or incarnation of Godhead, descends from the kingdom of God for material manifestation. And the particular form of the Personality of Godhead who so descends is called an incarnation, or avatara. Such incarnations are situated in the spiritual world, the kingdom of God. When they descend to the material creation, they assume the name avatara.’ [Cc Madhya 20.263–264] There are various kinds of avatars,such as purusavataras, gunavataras, lilavataras, sakty-avesa avataras, manvantara-avataras, and yugavataras—all appearing on schedule all over the universe. But Lord Krsna is the primeval Lord, the fountainhead of all avataras. Lord Sri Krsna descends for the specific purpose of mitigating the anxieties of the pure devotees, who are very anxious to see Him in His original Vrndavana pastimes.” (Gita 4.8 purport)

As far as the idea that Jesus Christ accepted the sins, or sinful reactions, of his followers, Srila Prabhupada expressed one concern: The followers should refrain from sin. They should consider, Oh, if I sin, my spiritual master will have to suffer!” Christians in particular may consider, “Because I have sinned, my spiritual master had to suffer! So I should not commit sin any longer.” That should be the basic sense. They should not think, “Oh, poor Jesus suffered for me, but now I can go on sinning.”

So, we accept Jesus as a saktyavesa-avatara, as an incarnation of Krishna. Christmas should be a time when we remember the teachings of Jesus Christ, the mercy of Jesus Christ, and the sacrifice he made for us. And we should resolve to be better followers, better servants of God and God’s representatives, and of all humankind and all living beings.

Hanukkah, in the Jewish tradition, is also an important festival celebrated at this time of year. It is a winter festival, and winter is a dark season, when the sun sets early and rises late. Hanukkah is the festival of light. Historically, the ancient temple in Jerusalem was seized and desecrated, but eventually, with great courage and sacrifice, the Jewish heroes, the Maccabees, won it back. They wanted to clean and purify the temple to make it fit for worship of the Lord, and their worship included a flame that was sustained by sanctified oil, to be maintained at all times. But when the Maccabees regained the temple, they found only one flask of the priestly oil, enough to burn for onlyone day. Still, they lit the great temple lamp, the menorah, and, according to the story, the oil burned for eight days, until they could get more. So, the miracle of Hanukkah is that the purified oil, which was sufficient to last only one day, burned for eight days, time enough to obtain more.

Figuratively, the temple is the heart. Cleaning the temple means cleaning one’s heart of the many dirty things that accumulate there by material association. That dirt includes false identification with the body and material desires for the gratification of the body’s senses and mind independent of God’s sanction and God’s service. And figuratively, the light is transcendental knowledge, or consciousness of God, which illuminates the heart and dispels the darkness of ignorance.

Just as the year has its cycles, we also pass through phases. We wish we could always be fully God conscious, but practically we may find cycles in our spiritual life, periods of increased devotion to God interspersed with periods of increased preoccupation with other matters. And the Hanukkah festival, the lighting of the candle or burning of the lamp, means brightening our hearts with God consciousness, with Krishna consciousness—cleaning the temple of the heart and rekindling the light of God consciousness, devotion to God, within the heart.

But we require help with such devotional activities, because alone each of us is quite weak. In the face of the material world, in the face of maya, we are weak and feeble, and we need the support and help of other devotees. If one person alone had to clean the temple, he or she would have a very hard job. But when all the devotees clean the temple together, the job becomes much easier.

The most complete science of God consciousness is presented in Srimad-Bhagavatam, whichnicely explains the process of cleansing the heart:

“Sri Krsna, the Personality of Godhead, who is the Paramatma [Supersoul] in everyone’s heart and the benefactor of the truthful devotee, cleanses desire for material enjoyment from the heart of the devotee who has developed the urge to hear His messages, which are in themselves virtuous when properly heard and chanted.” (SB 1.2.17)

The Bhagavatam says that hearing topics of Krishna, of God—just as we are sitting here and listening to Krishna’s message—is itself a pious activity, a form of devotional service. We have only to open our ears to the message of Godhead and we become pious (srnvatam sva-kathah krsnah punya-sravana kirtanah). Then, hrdy antah stho hy abhadrani: the inauspicious things in the heart—we could say the dirty things in the heart, our evil thoughts and selfish desires—become cleansed. How? Vidhunoti suhrt satam: The Lord Himself helps the truthful devotee to clean the dirt, because the Lord Himself is already there in the heart. He is already there, but because the heart is covered by material contamination, we cannot perceive the Lord’s presence; we cannot hear His voice. However, when we show our eagerness to hear the Lord’s message through our ears, the Lord within reciprocates. He helps cleanse the dirty things from the heart so that we can hear Him there, guiding us. And when we surrender to the Lord and make sacrifices for Him, He supplies unlimited fuel for maintaining our heart’s flame of devotion.

Again we see how important association is, because the process for cleansing the heart is hearing the messages of Godhead, and only in the association of devotees can we receive the messages properly. Through our hearing and then chanting and repeatingwhat we have heard, the heart becomes cleansed by the grace of the Lord. Ceto-darpana-marjanam: By chanting the holy names of God and by hearing the transcendental glories of God, the heart becomes cleansed and the light of Krishna consciousness there burns more brightly. It spreads throughout the entire body and then emerges—through the skin, through the eyes, through all the different sense organs. Especially, it comes out through the mouth in the form of transcendental sound, which comes from the heart. The messages that one has received through the ears and that have entered the heart come out again through the mouth and spread light, enlightenment, throughout the world.

So, tonight we greatly appreciate the efforts of Mother Urvasi, for she works so hard to create a situation where we all can come together and speak about God, hear about God, and remember God. Holy days are special occasions when we can get together and remember the Lord’s appearance, or the appearance or disappearance of great devotees, or great events that have taken place in the service of the Lord. And when we get together and hear about the Lord and the great devotees of the Lord and the great service and miracles that have taken place in relation to the Lord, we become purified. And we become enlightened and engladdened.

Peace on earth and goodwill toward humanity actually can be achieved through God consciousness. The Bhagavad-gita explains how we can achieve peace: we must first make peace with God. If we reestablish our relationship with God and experience God’s peace and friendship, then we can have real peace and friendship amongst ourselves and help each other in our relationships with Him.

Are there any questions?

Guest: I want to ask how you feel about a belief I am entertaining, namely that Jesus was a spiritual master because he had attained a spiritual level of consciousness or ascendancy through releasing his ego attachments and becoming transparent to God, and that statements attributed to him such as “No one can come to the Father but through me” and “I am the way, the truth, and the light” could be referring to the way that he had attained his level of spiritual mastery. That is, such statements may be indicating that one cannot come to the Father in any other way but to release ego attachments and create this transparency to God. I realize that you were referring to the need for a spiritual master to assist one in achieving a level of spiritual ascendance, but could Jesus have been saying, “This is the way—the way I’ve done it”?

Giriraj Swami: What you say could be true. In fact, Srila Prabhupada used to describe the spiritual master as transparent. To be transparent, we have to purify ourselves of all material dross, and the subtlest level of material contamination is false ego. We cannot be transparent unless we become free from false ego. However, we do not accept the idea of the impersonalists that we give up our ego to merge and become one with God. Rather, we accept the instruction of the Bhagavad-gita, of Jesus Christ and other theists, to give up the false ego, the misconception that “I am the body, I am the Lord, I am the controller, I am the proprietor, I am the enjoyer” in favor of the real ego, the true understanding that “I am the eternal servant of God.” Certainly the spiritual master is the eternal servant of God, or Krishna, so he can properly represent Him and direct others to Him. And certainly the process of giving up the false ego in favor of the real ego, the process of devotional service, is the only process that will bring us to God, that will enable us to fully realize we are eternal servants of God rather than illusory masters of the world.