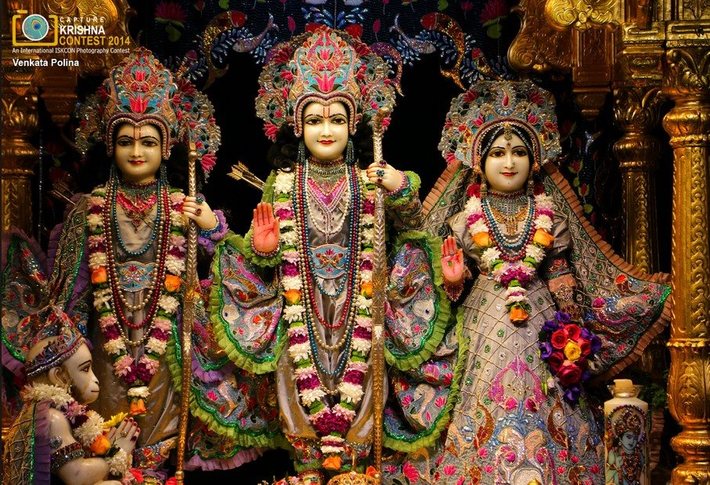 We wish you all a happy Diwali. Diwali, or Dipavali, marks the end of the year, and by the year’s end we want to pay our debts, rectify our relationships–and then try to do better the next year.

The Vedic literatures inform us that in the present age, Kali-yuga, the recommended process for self-realization, or God realization, is the chanting of the holy names of the Lord. Of course, we know that Lord Krsna appeared about five thousand years ago and spoke the Bhagavad-gita. At the end of the Bhagavad-gita (18.66) Lord Krsna instructed:

“Give up all varieties of religiousness and just surrender unto Me. I will deliver you from all sins. Do not fear.”

But how do we surrender to Krsna, practically? It is a big question. Therefore Krsna Himself came again about five hundred years ago as Sri Krsna Caitanya and showed us how to serve Krsna and develop love for Krsna, especially in the present age of Kali. He quoted one verse from the Brhan-naradia Purana (3.8.126):

Lord Caitanya Himself demonstrated how to chant the holy names. Actually, there are two methods: In japa, one chants softly but loud enough that at least he himself, or she herself, can hear. Our acaryas have recommended that we chant on beads, japa-mala. I suggest that as a New Year’s resolution you all begin to chant at least one mala (round) every day, and that those who are chanting already try to increase. Suppose someone is chanting two malas every day. In the New Year that person can decide to do four malas, or whatever he or she can manage. One mala will take five to ten minutes. So, that is japa.

The other method is kirtana. As you know, kirtana means loud chanting, all together, usually with musical instruments such as mrdanga, karatalas, and sometimes harmonium. That collective chanting of the holy names of God is very effective in the present age of Kali.

And what does chanting do? Sri Caitanya Mahaprabhu explains, ceto-darpana-marjanam: chanting cleanses the dirt from the mirror of the mind. If you have a mirror and you want to know what you look like, you have to look in the mirror. But if the mirror is covered with dust, you cannot see. So we have to cleanse the dust from the mirror of the mind; then we can know who we are. Now, in ignorance, we may think we’re the body. We may think that we’re black or white or red or yellow; man or woman; American, Russian, Chinese, or African. We have so many designations based on our falsely identifying with the body. But ceto-darpana-marjana–when we clear the dust from the mirror of the mind by chanting, we can actually see who we are: not the body but the soul within the body. The soul is not black or white or male or female or Russian or Chinese. The soul is pure spirit, part and parcel of God, the Supreme Spirit, Krsna.

So chanting will cleanse all the dirt from the mind, or the heart. But how does chanting work? A verse from the Padma Purana (quoted as Cc Madhya
17.133) explains:

“The holy name of Krsna is transcendentally blissful. It bestows all spiritual benedictions, for it is Krsna Himself, the reservoir of all pleasure. Krsna’s name is complete, and it is the form of all transcendental mellows. It is not a material name under any condition, and it is no less powerful than Krsna Himself. Since Krsna’s name is not contaminated by the material qualities, there is no question of its being involved with maya. Krsna’s name is always liberated and spiritual; it is never conditioned by the laws of material nature. This is because the name of Krsna and Krsna Himself are identical.”

The holy name of Krsna is Krsna Himself. Abhinnatvat nama naminoh: there is no difference between the name and the person who has the name. In the material world, or the relative world, there is a difference between the name, or word, and the object. For example, if I am in the desert dying of thirst and I chant “water, water, water, water,” just chanting “water, water” will not quench my thirst, because the word water and the substance water are different. But in the spiritual world, the absolute world, the name of the thing and the thing are the same. So when we chant the holy name of Krsna, Krsna is actually present, dancing on our tongue. Thus, because Krsna is all pure, when we associate with Him by chanting His holy name, we become purified (ceto-darpana-marjanam). And when we become purified–when we become Krsna conscious–we automatically develop all good qualities.

At present we have qualities that are good, and we have other qualities that are not so good. Usually at the end of the year people make resolutions for the new year–how they will improve in the new year. It may be that one will try to not lose one’s temper anymore, or try to not overeat. We make so many resolutions, but after some time we fail in our determination because of weakness in the heart. The one resolution that will eventually help us develop all good qualities and keep our other, secondary resolutions is the resolution to chant the holy names of God.

Diwali also commemorates the return of Lord Ramacandra to Ayodhya. You all know the history of how Rama was banished from His kingdom into the forest. In the forest Ravana kidnapped Sita and took her to Lanka. Then Rama and Laksmana searched for Sita. They made alliances with many monkey warriors, and eventually They came to the southern tip of India. They built a bridge across to Lanka, and eventually Rama killed Ravana, which is commemorated by Dasara, or Rama-vijaya-dasami. Then Mother Sita was tested in fire, and she emerged pure. Rama, Laksmana, and Sita, accompanied by other associates, returned to Ayodhya. So the residents of Ayodhya, to prepare for the Lord’s arrival, placed lamps on the rooftops and balconies–and celebrated His return. Then Lord Ramacandra was installed on the throne.

So this should be our resolution: to purify our hearts so that the Lord will have a proper place to sit there. And who could be more fortunate a person than he who has Lord Rama, or Krsna, with him?

There are many Ramayanas, or histories of Ramacandra, but the most authorized in Sanskrit is the Valmiki Ramayana. Consistent with that version, the Ninth Canto of Srimad-Bhagavatam also contains a short Ramayana. And at the end of the Bhagavatam’s Ramayana, there is a statement that during the reign of Lord Ramacandra all of the citizens were peaceful and happy, just like in Satya-yuga. There are four ages that repeat in cycles, like the seasons. Satya-yuga is the best of the ages, the golden age. Then come Treta-yuga, Dvapara-yuga, and Kali-yuga. The Bhagavatam describes that during the rule of Lord Ramacandra all the citizens were religious and completely happy, healthy, and peaceful, just like during Satya-yuga, although it was actually Treta-yuga. Srila Prabhupada comments that by God consciousness, Krsna consciousness, one can invoke Satya-yuga, or Rama-rajya, even in Kali-yuga. Therefore the same Krsna who appeared in Treta-yuga as Lord Ramacandra appeared in Kali-yuga as Lord Caitanya to introduce the chanting of the holy names–Hare Krsna and Hare Rama.

So if we take up the chanting of the holy names, we can not only invoke the presence of Lord Rama within our hearts, or welcome Lord Rama into our hearts, but we can recreate the situation of Satya-yuga, the situation of Rama-rajya. Sometimes Srila Prabhupada remarked, “People want the kingdom of God without God.” But we cannot have the kingdom of God without God. We cannot have Rama-rajya without Rama. But if we invoke the presence of God, of Krsna, by chanting His holy names, we can have the same experience of Satya-yuga in Kali-yuga. We can have the same experience of Rama-rajya, when, as described in the Bhagavatam, Rama loved all of the citizens just like a father loves his children, and all of the citizens loved Lord Rama and obeyed Him just like children love and obey their father. By Krsna consciousness, we can have the same situation even today. And if on this Diwali you can take a vow, make a resolution, to chant every day in the next year–and in all the years to come–that will bring you all auspiciousness.

We pray that the Lord will bless all of you in the year to come, and that you will also take the blessing of chanting into the New Year.