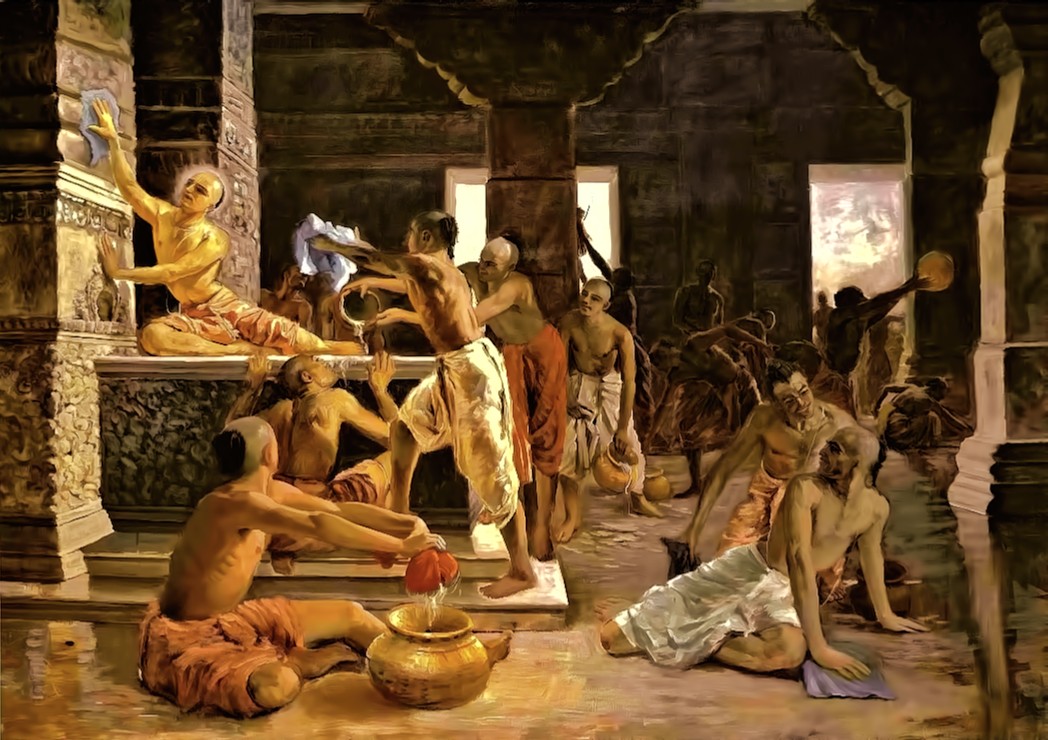 The observance of Gundica-marjana, the washing and cleansing of the Gundica temple, takes place on the day before Ratha-yatra, in preparation for the arrival of the Lord.

The history of Ratha-yatra goes back thousands of years, to a previous age, but the specific significance of the Ratha-yatra and the cleaning of the Gundica temple for us was shown by Sri Caitanya Mahaprabhu when He was residing in Jagannatha Puri five hundred years ago. In the transcendental mind of Sri Caitanya Mahaprabhu, the temple of Lord Jagannatha in Nilacala represented Dvakara, or sometimes Kuruksetra, and the Gundica temple in Sundaracala represented Vrndavana. And for Him, the Ratha-yatra was the process of the residents of Vrndavana meeting Krsna at Kuruksetra and bringing Him back to Vrndavana after a long separation.

Gundica is the name of the wife of King Indradyumna, the great devotee who wanted to have darsana of Nila-Madhava and who in separation from Nila-Madhava arranged to have a deity carved” ultimately resulting in the appearance of Lord Jagannatha, along with Baladeva and Subhadra. Marjana means “cleaning,” as we sing daily in the Gurvastakam: mandira-marjanadau. The spiritual master engages the disciples in cleaning the Lord’s temple (tan-mandira-marjanadau yuktasya bhaktams ca niyunjato ‘pi).

In Jagannatha Puri, eight days after the Ratha-yatra is the return Ratha-yatra. Thus, for eight days Lord Jagannatha (Krsna), along with His brother Baladeva and sister Subhadra, stay in the Gundica temple.

The goddess of fortune, jealous and angry because her husband has been away for so long and thus has neglected her, comes with her maidservants to the Gundica temple to force the servants of Lord Jagannatha to bring Him back to Nilacala. “When Lord Jagannatha starts His car festival, He gives assurance to the goddess of fortune that He will return the next day. When He does not return, the goddess of fortune, after waiting two or three days, begins to feel that her husband has neglected her. She naturally becomes quite angry. Gorgeously decorating herself and her associates, she comes out of the temple and stands before the main gate. All the principal servants of Lord Jagannatha are then arrested by her maidservants, brought before her, and forced to fall down at her lotus feet.” (Cc Madhya 14.133 purport) Finally, they promise to bring their master, Lord Jagannatha, back to Nilacala.

Once, on the day of the Hera-pancami festival, Sri Caitanya Mahaprabhu, Svarupa Damodara Gosvami, and Srivasa Thakura had a deep and intricate discussion about different types of mana” transcendental egoistic pride and jealous anger manifested in different consorts of the Lord” because the mana exhibited by the goddess of fortune in bringing her maidservants to subjugate her husband’s servants and oblige them to bring Him back is unprecedented.

Other than the eight days between the first procession and the return procession, the Gundica temple remains empty, and as you can imagine, during the rest of the year it accumulates all sorts of dust and dirt. Especially with the open style of architecture in India, in which the temples are exposed to the outdoors, they can become very dusty and dirty. So in preparation for the Lord’s arrival at the Gundica temple, Lord Caitanya asked permission from the authorities for Him and His devotees to clean the temple. The authorities were most respectful to Sri Caitanya Mahaprabhu and His followers, most obedient, and they replied, “Yes, whatever You like we will arrange. Cleaning the temple is not a fit service for You, but if it is Your desire, we shall supply whatever You require” waterpots and brooms.”

The superintendent of the temple delivered a hundred waterpots and a hundred brooms, and Sri Caitanya Mahaprabhu engaged hundreds of devotees in cleaning, and He personally took part Himself. He swept straw, dust, and grains of sand into one place, gathered it all in His cloth, and threw it outside the temple. Following His example, all the devotees also gathered piles of dust and straw and sand and threw them outside. Thus He and His associates removed all the debris that had accumulated in the temple complex over the past year.

During the process, Lord Caitanya would observe each devotee” how well each was cleaning” and if someone was cleaning well, He would praise them, and if someone wasn’t cleaning so well, He would correct them. Srila Prabhupada remarks that Lord Caitanya was showing how an acarya must train devotees, correcting and encouraging them as appropriate. Mahaprabhu also instructed the devotees by example. He collected so much debris from the temple that His pile was larger than all of theirs put together.

After throwing out all the debris, Sri Caitanya Mahaprabhu and His associates cleaned the temple a second time, looking for finer grains of sand and dust that they might have missed. Then they thoroughly washed the temple. With hundreds of devotees throwing hundreds of pots of water, they cleansed the ceiling, the walls, the floor, and everything else. Sri Caitanya Himself personally washed the sitting place of Lord Jagannatha with His own two hands.

In the course of the cleaning, Lord Caitanya took off His own garment, the top piece of His sannyasa dress, to clean the temple. Srila Prabhupada remarks that this shows how serious He was to clean, that He even used His own cloth to mop the rooms and polish the Lord’s throne. And Sri Caitanya-caritamrta says that in the end the temple was so clean and pure and cool and pleasing that it was just like the pure mind of Sri Caitanya Mahaprabhu Himself” and the minds of the devotees were similarly purified.

Srila Prabhupada has commented that if you clean the temple, you clean your heart; if you polish the deity’s paraphernalia, you polish your heart. And the activity of cleansing the Gundica temple is taken as not only a process for cleaning a temple complex, but also as a metaphor for how we should go about cleaning our own hearts. The temple was cleansed to make it a fit place for the Lord to reside. Similarly, each of us has to clean his or her heart to make it a fit place for the Lord. Of course, the Lord always resides in the hearts of the living entities (isvarah sarva-bhutanam hrd-dese ‘rjuna tisthati), but we want our hearts to be worthy places for Him to stay and enjoy His pastimes.