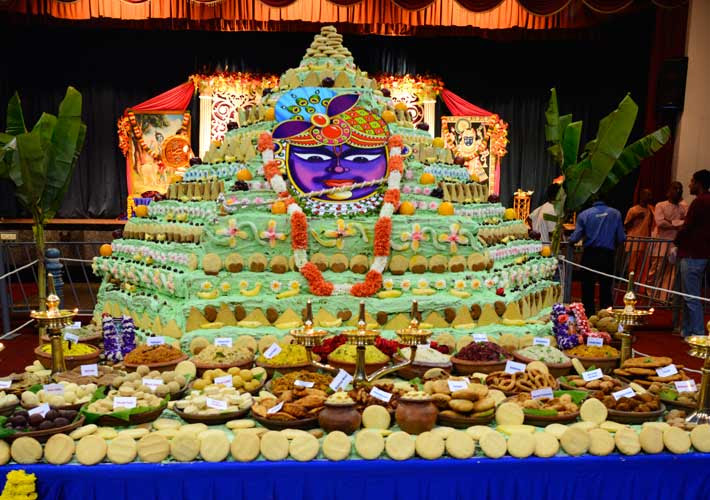 Govardhana Puja is celebrated in the month of Kartika (October – November) to commemorate the pastime of Lord Sri Krishna lifting the Govardhana Hill to protect the residents of Vrindavana from the wrath of Indra.

When the Supreme Lord Sri Krishna saw the residents of Vrindavana preparing for Indra-yajna, He suggested that they should forgo the worship of Indra and instead worship the Govardhana Hill. On coming to know of this, Indra became angry and sent a devastating rainfall over Vrindavana. Krishna picked up the Govardhana Hill with His little finger and it gave shelter to all the inhabitants of Vrindavana. Indra became conscious of his offense and begged for forgiveness from Krishna. Thus the Supreme Lord established that a devotee who is surrendered to the Supreme Lord and engaged in devotional service is free from all obligations and need not worship any demigods for material favor. This pastime is known as Govardhana Lila and is described in the tenth canto of Srimad Bhagavatam.

Govardhana Puja highlights Lord Krishna’s love towards His devotees. Worshipping the cows is an important part of this festival. 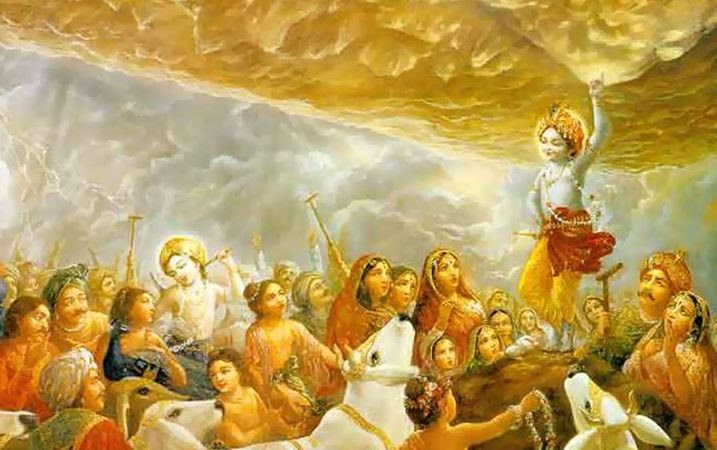 Lord Krishna declares in the Bhagavad-gita that He descends whenever the religious principles decline and the irreligious activities abound. The mission of His descent is to protect His devotees, vanquish the demons and reestablish the principles of religion. Lord Krishna, when He appeared on this planet around 5000 years ago, performed many fascinating pastimes which the devotees relish even today. One of such pastimes is the Govardhana Lila exhibiting the inconceivable power of the Lord.

The Govardhana Hill is intimately associated with the childhood days of Krishna when He enjoyed the company of His cowherd friends while tending the calves. The Hill was a favorite spot of the Lord where He performed many blissful pastimes in the association of his friends.

The Govardhana Lila is an example of not just Lord Krishna’s mystic power but also as to how the Lord protects His pure devotees from all calamities. The Lord also wanted to simultaneously curb the pride of Indra, the king of heaven. Once, the residents of Vrindavana were busy in the arrangements of a sacrifice meant for pleasing Indra who is also the controller of rain. But Krishna who was just seven years at that time, advised the residents headed by His father Nanda Maharaja to stop the Indra yajna and persuaded them to worship the Govardhana Hill and the local brahmanas instead. He explained how the Govardhana Hill was supplying their day-to-day needs.

Krishna’s proposal was accepted by all the cowherd men who then along with Nanda Maharaja performed a grand worship of the Govardhana Hill with an offering of various foodstuffs. The learned brahmanas chanted Vedic hymns. All the residents of Vrindavana decorated their cows and fed grass to them. Then all of them began to circumambulate the Hill with the cows in front.

At the end of the ceremony, Krishna assumed a great spiritual form and declared to all the villagers of Vrindavana that He Himself was the Govardhana Hill. He then accepted all of the offerings. When Indra learnt that the yajna meant for him was stopped by Krishna, he was overcome by anger and in retaliation he caused a heavy rainfall which inundated the entire land of Vrindavana. All the inhabitants of Vrindavana including the cows and calves had no other shelter than their dearmost Krishna and so they implored Him for protection. Then the Lord, the protector and well-wisher of cows and brahmanas and the refuge of His devotees lifted the Govardhana Hill on His little finger as easily as a child lifts a mushroom and all the inhabitants including the cows and other animals took shelter under the Hill. As the torrential downpour continued, Krishna stood with the Hill on His hand for seven days continuously.

The Govardhana Puja is performed every year on the day following Diwali in commemoration of this pastime of Krishna exemplifying His love and protection for His devotees and cows.

The Govardhana Hill is adored as the king of all mountains and the exalted servant of Lord Krishna. The Hill enjoyed the association of Krishna and Balarama and was constantly in touch with Their lotus feet. It provided water, fruits, flowers etc. for the Lord and His friends. There was abundant soft grass that was conducive to the strong growth of cows and calves and increased production of milk. The cowherd boys would also play in and around the caves of the Hill.

In Vrindavana and the surrounding areas, Govardhana Puja is performed on a grand scale every year. Lakhs of devotees assemble near Govardhana Hill to offer worship. Go-puja or worship of cows is also conducted on the same day. Krishna who is also known as Gopala is pleased when cows are protected. On the day of Govardhana Puja, the cows are decorated and fed well. Keeping them in front, devotees circumambulate the Govardhana Hill. Most Vrajavasis traditionally make a Deity of Govardhana Hill with cow dung and worship it on this day.

As per the instructions of Krishna and following in the footsteps of the residents of Vrindavana, this festival is celebrated every year in the month of Kartika. Devotees prepare varieties of foodstuffs with grain and ghee (like rice, dhal, halva, pakora, puri, etc.) and all kinds of milk preparations (such as sweet rice, rabri, sweet balls, sandesh, rasagulla and laddu). The food is stacked like a small hill and offered to the Lord. Then it is distributed to everyone as prasadam. Hence, this festival is also called Annakuta Festival.

Devotees also worship the cows on the day of Govardhana Puja. Krishna is known as Gopala – the protector of cows. There is also a prayer in Vishnu Purana (1.19.65) that states: namo brahmanya-devaya go-brahmana-hitaya ca. Here Krishna is described as the well-wisher of the cows and the brahmanas. The cows are decorated and fed well. Keeping the cows in front, devotees circumambulate the Govardhana Hill.

This is one of the major annual festivals at ISKCON temples all over the world as well as temples in Vrindavana. Devotees prepare varieties of foodstuff with grain and ghee such as rice, puri, dhal, halva, pakora, etc. and all kinds of milk preparations like sweet rice, sweet balls, sandesh, rabri, rasagulla and laddu. All these are stacked like a small mountain and offered to the Lord and then distributed as prasadam.

Srila Prabhupada, the Founder-Acharya of ISKCON in his Srimad-Bhagavatam purports writes: “The Lord is omnipotent; simply by His will He can perform anything and everything. When the Lord appeared as Lord Krishna, He played the part of the son of Yashoda and Nanda, and He lifted the Govardhana Hill, although lifting a hill is not His concern. He can lift millions of Govardhana Hills by His simple desire; He does not need to lift it with His hand. But He imitates the ordinary living entity by this lifting, and at the same time He exhibits His supernatural power. Thus His name is chanted as the lifter of Govardhana Hill, or Sri Govardhana-dhari…”