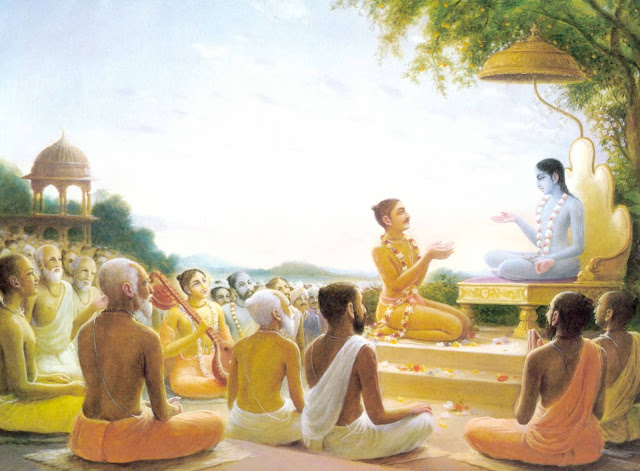 Mosquitoes are something that bother me and very often as an unconscious reflex action and many times as a conscious action, I catch myself killing many of them. This is just one of the many sins and offenses I commit, mentally, verbally and physically. How can I then not expect any reactions for these actions of mine. Why should I pray for a life of no difficulties. Rather, I should be praying to God to give me my quota of reactions so that I learn my lessons quickly and rectify my offensive and sinful mentality.
The Srimad-bhagvatam mentions the episode of King Pariksit garlanding Shamika Rsi with a dead snake due to being afflicted with unbearable hunger and anger which is very unusual of the tolerant and saintly King. What is commendable is his thought process as soon as he commits this offense.
The Srimad-bhagvatam 1.19.1-3 mentions it in this way - "While returning home, King Parīkṣit felt that the act he had committed against the faultless and powerful brāhmaṇa was heinous and uncivilized. Consequently he was distressed. King Parīkṣit thought: "Due to my neglecting the injunctions of the Supreme Lord I must certainly expect some difficulty to overcome me in the near future. I now desire without reservation that the calamity come now, for in this way I may be freed of the sinful action and not commit such an offense again. I am uncivilized and sinful due to my neglect of brahminical culture, God consciousness and cow protection. Therefore I wish that my kingdom, strength and riches burn up immediately by the fire of the brāhmaṇa’s wrath so that in the future I may not be guided by such inauspicious attitudes."
One may feign praying for punishment for one's offenses or one may pray for punishment for one's offenses not expecting God to fulfill it. But the King not only prayed for some punishment but when he heard the news of punishment, he became satisfied that his prayers are answered. The Srimad-bhagvatam 1.19.4 mentions - "While the King was thus repenting, he received the news of his imminent death, which would be due to the bite of a snake-bird, occasioned by the curse spoken by the sage’s son. The King accepted this as good news, for it would be the cause of his indifference toward worldly things." Thus, King Pariksit leads by his example of how a devotee should think while living life in this world.
When one asks the question, "Why do bad things happen to good people?", it shows an inherent defective attitude that, one is a very good person having done no bad. We all are guilty of doing bad, either knowingly or unknowingly and therefore we should expect some bad thing or the other in our life and when the bad does come upon us, we can see it as God's grace on us because everything including the bad is in indeed God's grace on us for our highest good. At least, that is how I want to see my life...
Source: http://thewisdompark.blogspot.com/2020/01/good-to-expect-bad.html
Tags: the wisdom park, blogs, achyut gopal das
E-mail me when people leave their comments –
Follow