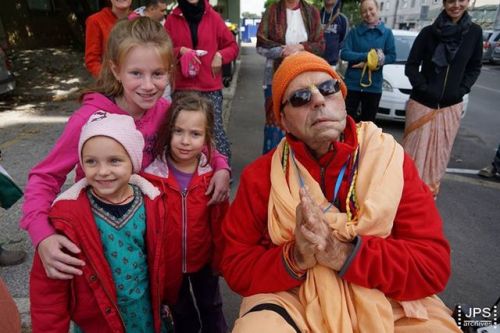 [It says that one who hears the pastime, when they leave the body they will get the benefit of leaving in the Ganges.] Lord Caitanya’s father, Jagannath Mishra, he would go to his guru’s ashram regularly. So one night he came back and suddenly got a high fever. So Sachi Mata started crying and she didn’t know what to do. At that time Lord Caitanya was still a small boy, maybe nine years old. He said everybody in this world leaves, as a human being everyone dies. So why are you lamenting? Call your relatives, call his friends, they should gather around him and chant Hare Krishna. What else are friends for? When you leave the body, they should be chanting. So she called their friends and relatives, they sat around Jagannath Mishra and began to chant Hare Krishna Hare Krishna Krishna Krishna Hare Hare, Hare Rama Hare Rama Rama Rama Hare Hare.

Two brahmanas were at the doorway discussing that this is very serious. So what should we do now? 500 years ago they did not have an ambulance to rush them off to hospital. No pharmacist. But they had physicians. Basic first aid. They thought the best thing was to lower him in the Ganges and the cool water would either take away his fever, otherwise if he left his body in the Ganges then he would go back to Godhead. Of course he could go any time he wanted, he could go, come back, he is an eternal associate of the Lord. But they didn’t know that and he was playing the pastime with the Lord.

So they took him down in procession to the Ganges. And mother Sachi said that, where are you going? Take me with you. I spent my whole life serving you, cooking your prasadam, you know, she made her plea that if you are going take me with you. At this time Lord Caitanya, He said, father, if you go who will hold My hand and take Me to school? When I call out father, who will be there to answer? So then they were about to move him into the Ganges and told Lord Caitanya, because he is in the mood that he is the father and Lord Caitanya is his son, he doesn’t think that Lord Caitanya is Lord Krishna.

He says there is one thing I have to tell you, I prayed to Lord Rama to take care of you and so you have nothing to worry about. You are under the protection of Lord Rama. So they lowered him in the Ganges up to his neck and they were all chanting Hare Krishna. Above his head came a divine chariot with two attendants. Then after some time he left his body and his spiritual form transferred to the spiritual airplane and then he went back to Godhead.

So they took his body out from the Ganges and Lord Caitanya then cried in separation. Big tears, black tears, the size they call it elephant prose, gajamani. These tear droplets formed like a pearl white necklace on the chest of Lord Caitanya. So then Lord Caitanya did all the final rites for his father, He did the yagna and everything. It says that one who hears the pastime, when they leave the body they will get the benefit of leaving in the Ganges.