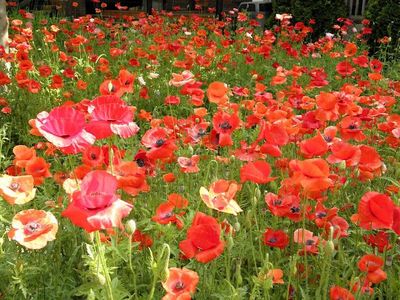 An older man with whitish hair and beard has seen me passing by before, at least twice.  Once he offered a quick exchange of words, with a cigarette in his mouth.

“Yah I know, I met a holy man the other day as he was passing…”

“Is that right?” I inquired.

“And, he blessed me. Minutes later I found a $20 bill on the street.” He was chuckling.

The sun was bright with rays shooting out along the street, going east. And I was going west, onward to join a small, backyard chanting party.

Nick was raking the leaves in front of Subuddhi’s home while waiting for two or three more to show up. We gathered. We chanted. One of Subuddhi’s tenants was from Bangladesh—a student. He was enjoying the mantra. We all enjoyed the eggplant pakora (fritter) because Subuddhi is the best when it comes to cooking. It will be hard to replace her in culinary prowess when she leaves us for Krishna’s abode. We are not anticipating that to happen, however, she is on in her years.

I had an incident this morning. Yes two incidents. I challenged some younger men. “We have some expectations of you. You are going to take over some day, so get ready!”