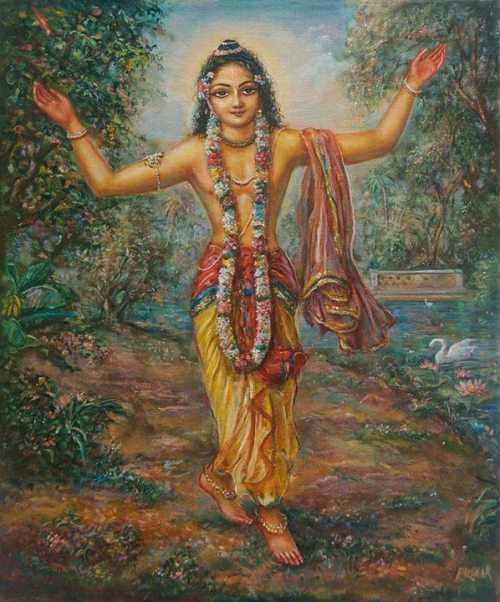 To better understand Sri Chaitanya let us ask the question: What induces the Lord to appear?

The answer to this question will help us benefit the most from this auspicious day.

Sri Chaitanya Mahaprabhu appears when a devotee sincerely cries for His appearance. It is the urgent call of Draupadi that made the Lord appear and cover her with cloth. Similarly, it was Advaita Acarya’s calling in “a thunderous voice” that shook the Lord’s seat in Vaikuntha and made Him come down to the material world. On His own, He has no interest in this world – only when the devotee calls Him does the Lord come.

Advaita Acarya saw that the souls in Kali-yuga suffered without any clue on how to be released from the clutches of material illusion. After deliberating for some time, Advaita Acarya understood that only if the Lord personally appeared and delivered the fallen souls could they stand a chance. So, he went to the bank of the Ganges where he made a little altar and offered Ganga water and tulasi leaves while crying from his heart for the descent of Krishna to come. Advaita repeatedly shouted “please come,” and the Lord could not ignore the sincere and urgent request of His great devotee.

Similarly, it is our eagerness on Gaura Purnima that will move the Lord to show us His mercy and appear in the temple of the heart – hrdaya mandire. Without this eagerness, how will the Lord be inclined to appear to us?

Srila Rupa Goswami praises the Lord’s eagerness to respond to His devotee’s call in his anthology of prayers (Padyavali):

When the Lord heard His devotee’s piteous prayer for help, He felt a great urgency to rescue him. So, He ran out of His palace, and jumped on Garuda’s bare back. Although His commander Visvaksena was there to help Him mount His carrier, and His servant brought His jewelled sandals, He was in too much of a hurry to accept their assistance. Thinking, “Who is calling me in such desperation?” the Lord made such a haste that He forgot everything else. Let us bow down again and again to the Lord’s eagerness to save His devotee which was responsible for His swift departure.

Please know: The Lord always reciprocates with His devotees. He is never silent to a sincere appeal.

May we find the time to turn earnestly to Shri Chaitanya on Gaura Purnima and pray to Him like Srila Narottama Dasa Thakura did:

“My dear Lord Chaitanya, please be merciful to me, because who can be more merciful than Your Lordship within these three worlds?”