“Anyone who bathes in Ganga, touches the Ganga, drinks Ganga, sees Ganga or anyone who is touched by a breeze that has come from the Ganga will get Krsna Prema – love for Krsna”. 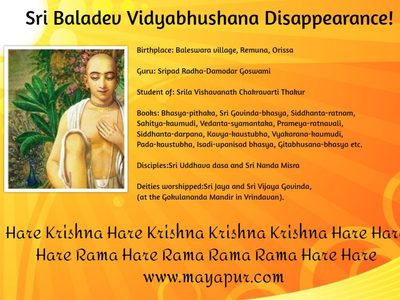 Sri Baladeva Vidyabhusana (Sri Govinda Dasa) appeared in the 1600’s near Remuna, Orissa. In his youth, he mastered Sanskrit grammar, poetry, and logic. After carefully studying the commentries of Sankara and Madhva he took initiation in the Tattva-vadi disciplic succession of Sripad Madhvacarya. Baladeva Vidyabhusana became a dig vijaya pandit (conqueror of all opponents) and began visiting the holy places. Wherever he went he defeated the local sages, scholars, and sannyasis.

In Jagannatha Puri, he learned the superexcellent philosophy of Sri Krishna Chaitanya from Sri Radha-Damodara Goswami, and took initiation after converting to Gaudiya Vaishnavism. In Vrindavana, he studied Shrimad Bhagavatam under Srila Vishvanatha Cakravarti Thakura and worshiped Radha-Syamasundara.

In 1706 A.D. Vishvanatha Cakravarti Thakura sent him to Gulta (near Jaipur,Rajasthan) to uphold the credibility of Mahaprabhu’s movement. The local Ramanandis (a branch of Sri Vaishnavas) were claiming that the Bengali Vaishnavas had no right to worship Govindaji because they had no commentary on the Vedanta-sutra.
Lord Govindaji Himself directly revealed the Govinda-bhasya (a Vaishnava commentary on Vedanta) to Baladeva Vidyabhusana. Using it, Baladeva solidly established Gaudiya Vaishnavism as an independent philosophy. He also reinstated the Bengali Vaishnavas in Govindaji’s service in Jaipura. Govinda-bhasya is the only bhakti commentary on Vedanta-sutra.

Sri Baladeva Vidyabhusana was a niskincana-parama bhagavata, fully-renounced topmost Devotee of Lord Krishna. His more than twenty-four books and commentaries have helped thousands of Vaishnavas understand the sublime philosophy of Krishna consciousness and the intimate writings of the six Goswamis. Since he was devoid of false prestige, he never wrote about his birth, parents, lineage, personal life. According to Sri Bhaktivinoda Thakura in Navadvipa-dhama mahatyam, in Chaitanya lila Baladeva Vidyabhusana is Sri Gopinatha Acarya, the brother-in-law of Sri Sarvabhauma Bhattacarya. In Vraja he serves as Sri Radha’s eternal maidservant Ratnavali Devi.
( Ref: Gaudiya history)