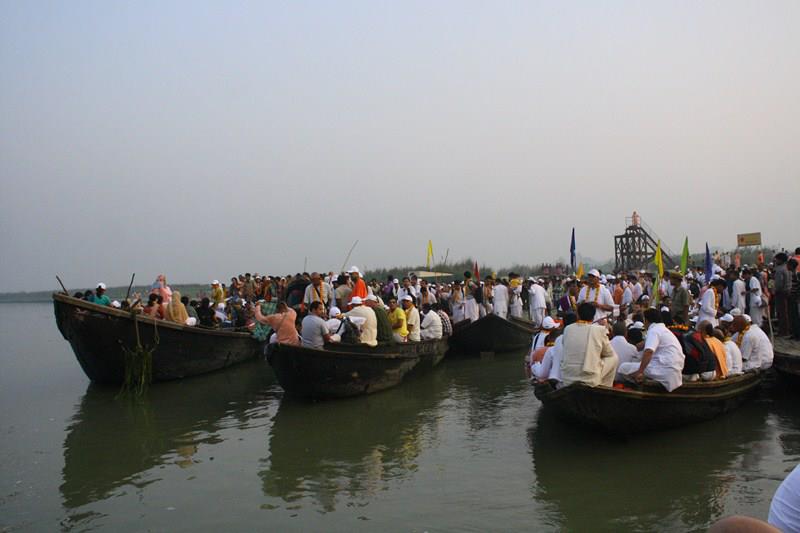 In 1896, E. Hanbury Hankin (a British physician) after testing the water of Ganga wrote in a paper published in the French journalAnnales de IInstitut Pasteur ,
The bacterium Vibrio Cholerae which causes the deadly Cholera disease, when put into the waters of Ganga died within three hours! The same bacteria continued to thrive in distilled water even after 48 hours!
He also suggested that the water of this river and its tributary Yamuna were responsible for containing the spread of this deadly disease cholera in the region in those days!!

Water of Ganges has Anti-putrefaction properties

C.E. Nelson, another British physician noticed that, the waters of Ganga when taken even from one of its dirtiest mouths at Hooghly, by the ships returning to England, remained fresh throughout the long journey!! Normally river water begins to putrefy over a period of time due to lack of oxygen which promotes the growth of anaerobic bacteria, which in turn gives rise to the smell of stale water.

In 1927, Flix dHerelle , a French microbiologist, was amazed when he saw that only a few feet below the bodies of persons floating in the Ganga who had died of dysentery and cholera, where one would expect millions of germs, there were no germs at all!

In other words, Hindus had for thousands of years rightly believed that Ganga purifies the dead bodies, which is why probably the bodies of even those who died of infectious diseases were offered to this river for purification!

D.S. Bhargava, an Indian environmental engineer/professor of hydrology has spent a life time studying the amazing properties of Ganges. He measured the remarkable self cleansing ability of Ganges in an exhaustive three year study which showed that Ganges is able to reduce its biochemical oxygen demand levels much faster than other rivers! Bhargava says that the self-purifying quality of this river leads to oxygen levels that are 25 times higher than any other river in the world.The Ganges cleans up suspended wastes 15 to 20 times faster when compared to other rivers!

There are two major factors which give Ganges its unique ability.

1. The presence of Bacteriophages which gives it the anti-bacterial nature.
2. An unknown factor called the Mystery Factor, which gives this river an unusual ability to retain dissolved oxygen from the atmosphere!

The high levels of oxygen in the waters of Ganga gives it the unique ability to remain fresh over a prolonged period of time. The waters of Ganga when added to other water resources in adequate amount, causes the bacteriophage in it to quickly multiply cleaning the new water resource of any bacteria present in it. Which is why the ancient Indians used to take Ganga jal back home to clean their local water resources! People practice it even today, except that most of them dont know the actual reason!

In other words, the water of river Ganga can be an alternative for using antibiotics to treat bacterial diseases! Ancient Indians who used the water of rivers like Ganga never required any antibiotics, for the very water they used was anti-bacterial in nature! This type of Bacteriophage Therapy has been suggested by many researchers, but rarely tried/tested or practised in the health industry.

In fact it was in the former Soviet Union that the most active research about using bacteriophages to treat bacterial diseases was done at the George Eliava Institute ! This research institute was co-founded by George Eliava and Felix DHerelle after DHerelle introduced Eliava to the wonderful world of Bacteriophages.