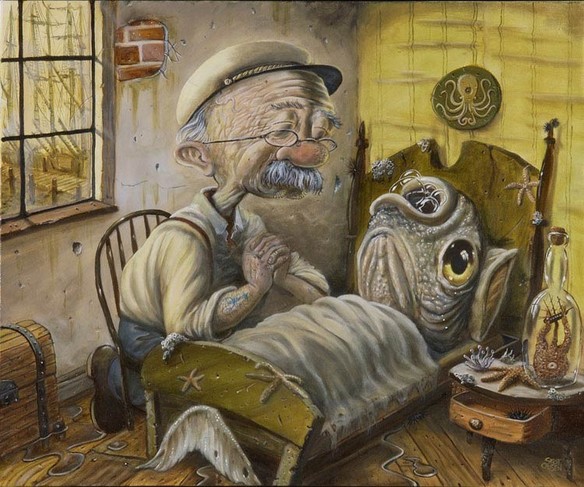 Recent advances in genetic engineering (GE) seem to twist nature’s arm. Now scientists alter the genetic code within seeds or eggs to make “improved” plants and animals. Wealthy countries use special GE corn and soy to insure an enormous cash crop in the form of fodder for livestock and to make ingredients for processed fast food, such as the corn syrup in soft drinks.

So far scientists have mastered a few crops, but will they revolutionize the food industry with an engineered fish? In December 2012, the U.S. Food and Drug Administration (FDA) announced its intention to sanction the first transgenic living organism. GE opponents quickly dubbed it “the Frankenfish.”

It was invented by Aqua Bounty at their farm in Prince Edward Island, Canada. With headquarters in Maynard, Massachusetts, Aqua Bounty has been conducting fishy experiments since the early 90s. To produce the Frankenfish, the genetic material of cold water Atlantic Ocean pout (looks like an eel) is inserted into an artificially compressed salmon egg. The pout puts on fat faster than a salmon, hence the combination makes a fattier fish. However, the material from the pout doesn’t exactly combine with the salmon’s DNA. It is rejected, causing inflammation. A growth factor (GF-1) is then added to accelerate reproduction of the inflammation. The fish grows twice as big and three times as fast as it would have without the engineering.

With so many fast-food restaurants looking for a substitute for red meats, linked to obesity and heart disease, fish is in big demand. Because of over fishing, the ocean population of wild fish is predicted to become nearly extinct in this century. Fish farms are the future. Will the FDA approve the mass production of a manipulated living organism for human consumption?

Fears of the Frankenfish

Some internal biologists predict that eating the GE fish will cause allergic reactions and stomach ulcers. The FDA does not do any testing itself; all of the testing is left up to Aqua Bounty, which claims their fish is perfectly safe. Some environmental scientists say the new fish poses a danger to ocean fish. A Frankenfish loose in the sea would enter the food chain and quickly create an imbalance. After some decades native ocean fish would be wiped out.

Those who wish for ethical treatment of animals complain that this fish will never spawn, swim freely, or live a full life span. And the poor creatures tend to develop birth defects from growth hormones, grow hump backs, and develop jaw erosion or multi systemic focal inflammation. As sterile females with poor longevity, they will require gallons of antibiotics to remain alive in their small underwater fish farms. They will need to be harvested at an early age to prevent disease from establishing itself within the stock.

Environmentalists predict disaster, animal rights advocates cry cruelty, and biologists describe possible health risks and lawsuits. Meanwhile the FDA announces they are on the verge of approval. Is there a veritable edible monster waiting for us in the basement of world food consumption?

It would seem we need to ask ourselves a basic question before we can even begin to confront the lurking horror of the Frankenfish: What is legitimate human food?

We can determine when food is good filled with inherent nutritious energy by qualities such as texture, moisture, color, aroma, and radiance. A tree-ripened mango has a glow, hue, and perfume that can attract attention from across a room. How many times have we had a meal with family or friends when someone remarked, “Wow, this tastes amazing!” Good flavor has integrity; it enthralls us because it contains vital subtle elements of the earth imparted to plants. Tasty and satisfying, simple fruits or vegetables can sustain the body and deliver vitality all day long. The ancient Vedas call this potency pusti. Though generally translated as “nutrition,” it is Mother Earth’s gracious power, bestowed by the Supreme Lord, to sustain and maintain all living creatures.

Srila Prabhupada comments on the inherent value of plants: “Krishna’s arrangement is complete. The herbs, plants, trees, and creepers, they grow luxuriously and supply the needs of the human being. Every plant and creeper has got some service. We simply do not know how to use them. Experienced men, they collect so many ausadhi [herbs]. We are neglecting these herbs and vegetables, but because we do not know how to use them we are confronted with so many bills from the doctor.” (Lecture, 1974)

Our ability to discern how every vegetable and creeper has some service to offer human beings can be the dawning of spiritual awareness, as well as good health. In his purport to Bhagavad-gita 17.10, Srila Prabhupada writes,

The purpose of food is to increase the duration of life, purify the mind, and aid bodily strength. This is its only purpose. In the past, great authorities selected only those foods that best aid health and increase life’s duration, such as milk products, sugar, rice, wheat, fruits, and vegetables. . . . All these foods are pure by nature. They are quite distinct from untouchable things like meat and liquor. Fatty foods, as mentioned in the eighth verse, have no connection with animal fat obtained by slaughter. Animal fat is available in the form of milk, which is the most wonderful of all foods. Milk, butter, cheese, and similar products give animal fat in a form which rules out any need for the killing of innocent creatures. Slaughter is the way of subhumans. Protein is amply available through split peas, dal, whole wheat, etc.

Food is our most fundamental connection with the Supreme. God imparts the delicious mystery of exquisite taste and also the relief of hunger. He is our very power of digestion. By His grace we are enjoying life. Srila Prabhupada writes,

According to ayur-vedic sastra, we understand that there is a fire in the stomach which digests all food sent there. When the fire is not blazing there is no hunger, and when the fire is in order we become hungry. Sometimes when the fire is not going nicely, treatment is required. In any case, this fire is a representative of the Supreme Personality of Godhead. . . . Sabdadhibhyo ’ntah pratisthanac ca [Vedanta-sutra 1.2.27]: the Lord is situated within sound and within the body, within air and even within the stomach as the digestive force. There are four kinds of foodstuff some are drunk, some are chewed, some are licked up, and some are sucked and He is the digestive force in all of them. (Bhagavad-gita 15.14, Purport)

Meanwhile the long-term effects of genetically modified (GM) foodstuffs on human health and the environment remain in question. As the fire of digestion, the Supreme Personality of Godhead doesn’t have to efficiently digest foods not chosen by Vedic authorities as fit for human consumption. And chronic indigestion causes disease.

We depend fully on food, yet with all of modern industrial enterprise we cannot devise anything that can take its place. No modern scientific laboratory equipped with chemicals, test tubes, and scientists with Ph.D.’s has ever invented a way to manufacture food in a tube. Certainly they try; to do so would be highly useful. Their efforts in the form of genetically modifying plants and animals have been arduous and even grotesque.

Srila Prabhupada explains: Godless civilization they can no more depend on the natural gifts. They think that by industrial enterprises they will get more money and they’ll be happy. And to remain satisfied with the food grains, vegetables, and natural gifts is a primitive idea. They say, “It is primitive.” When men were not civilized, they would depend on nature, but when they are advanced in civilization, they must discover industrial enterprises. (Lecture, 1974)

Since the dawn of history human beings have obediently cooperated with nature by becoming the cultivators of seeds, plants, and trees. Now they’ve become manipulators, violating the laws of nature, which are under the strict jurisdiction of the Supreme. Man is allowed to produce food in gracious cooperation with nature but is not allowed to exploit her resources to maximize profit or the slaughter of innocent creatures.

Food As a Loving Offering

According to the Bhagavad-gita (3.14), “All living beings subsist on food grains, which are produced from rains. Rains are produced by performance of yajna [sacrifice], and yajna is born of prescribed duties.” Srila Prabhupada comments:

The Lord does not say that in order to ensure our survival we need to splice together the genes of several fruits and fishes. Rather, He recommends spiritual sacrifice. He is God, so supplying food to us, no matter how many of us there are, is never beyond His abilities. As Mahatma Gandhi said, “The world has enough for everyone’s need, but not enough for everyone’s greed.”

Srila Prabhupada and the Bhagavad-gita strongly recommend we seek the help of God for getting food. By doing everything we do to please the supplier of the raw ingredients, we transform the way we think of food, and the way we grow, cook, distribute, and eat it.

Whatever food the devotee receives, he or she first offers it to Krishna, who says in the Bhagavad-gita (9.26), “If one offers me with love and devotion a leaf, a flower, a fruit, or water, I will accept it.” Lord Krishna asks only that our foods be offered to Him with love.

Srila Prabhupada writes: “In this way our karma is neutralized, for from the very beginning we are thinking that the food will be offered to Krishna. We should have no personal desires for the food. Krishna is so merciful, however, that He gives us food to eat. In this way our desire is fulfilled. When one has molded his life in this way dovetailing his desires to Krishna’s then it is to be understood that he has attained perfection in yoga.” (The Perfection of Yoga, Chapter 4).

In the practice of yoga, eating a properly prepared meal is required for mental and physical health. What’s more, it is an essential component for developing our feelings of love of God. Just as cooking a meal for someone you care about is a gesture of affection, cooking meals for the Lord is a special act of transcendental love. The devotee collects and prepares the best natural ingredients with respect for the source of those ingredients and then offers food to Krishna with prescribed prayers. The devotee partakes of the freshly cooked meal with a grateful awareness born of sacrifice. For one who eats only fine food prepared and offered with love, a special appreciation for what is sacred and pure develops. Krishna is the very taste and love in the food. Who can impart divine realization through the sensation of flavor? It must be someone at least as ingenious as the most ingenious scientist. Give credit where credit is due. Let’s first determine what Krishna wants to eat, what He considers proper food, and prepare our meals with Him in mind. Then there will no longer be any question or debate about what is food. We will be fully satisfied and well fed too.