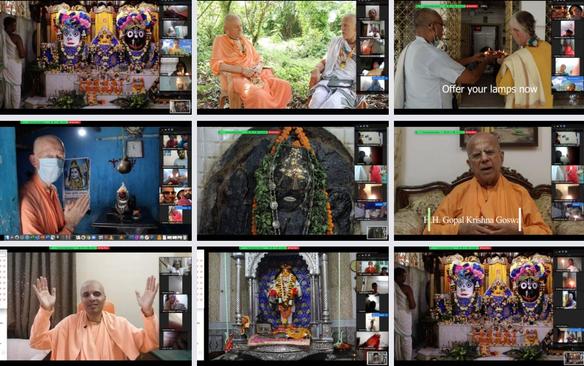 6 days of Parikrama with 40,000 devotees hearing Gaura Katha from more than 15 Sannyasis and Prabhupad Diciples!! Want to hear our story??

in the auspicious month of Purusottama this year when ISKCON Mayapur announced a Virtual Navadvipa Mandala Parikrama. This idea was conceived under the guidance of the Parikrama Commander HH Jayapataka Swami and conducted by Mayapur Tourism Division. It is prescribed in the Purusottama Month that one should visit Holy places and perform as much as extra devotional activities as possible.  By doing so one achieves unlimited spiritual benefits. What more holy place is there than Navadvipa – the birth and pastimes places  of Lord Gaurachandra and what greater devotional service can be there than performing parikrama of Navadvipa with senior devotees, hearing the Nectarian pastimes in each island.

Thus, this project was launched on 18th September the first day of Purusottama month, by HH Jayapataka Swami. It was promoted on the official ISKCON Mayapur Facebook page Mayapur.com and on all other social media platforms. Devotees had to register themselves free of charge at mayapuronlinefestival.com choosing their preferred language. The parikrama was conducted in 6 Languages – English, Hindi, Bengali, Spanish, Russian and Chinese. Total of 11,800 devotees registered for this Parikrama.

The devotees received the Zoom links to join the parikrama on their email ID and the Parikrama began on 9th October with the Adivas ceremony. There were 8 Zoom accounts running simultaneously with one devotee in each zoom account as the host. The devotees mentally arrived at Yogapitha and under the auspicious neem tree where Sri Visvambhara was born and took their Sankalpa (vow) to perform the Parikrama for the next 6 days. From 10th to 15th October the devotees went through the 9 islands of Navadvipa and also had the opportunity to offer lamps to the deities in each island. Finally on 19th October the Mahamilan utsav- the festival when all the groups meet took place. HH Jayaptaka Swami, HG Padmanetra Das – Namahatta Head and HG Atul Krsna Das spoke to the devotees and the participants also shared their realizations with us. Here are few of those priceless realizations…

The online Purushottama maas Navadvipa  Parikrama on zoom was a wonderful experience. As we were watching the videos we were completely unaware of the time of the day at our place.  It was as if we were physically present in the Dham.  When the various Senior Devotees were speaking on the glories and the pastimes of Lord Gauranga it was like we were sitting in that place and hearing from Them directly.  The videos were well made and we could see all The Deities, Ponds, The Bhajan Kutirs all so clearly.  These will surely help us meditate on the Dham. Thank you from the bottom of our heart the entire team of this Parikrama for this wonderful, unforgettable experience, which proved nothing can stop the Dham Devotees who come up with such innovative ideas.

I am so happy and delighted by your efforts for the virtual parikrama. Every time we travel to Dham for the parikrama but this year the beautiful Dham of Mayapur and Parikrama has come to us, what a wonderful thing!!!!! It is such a pleasure and bliss to be able to do the parikrama from home as every member of the family gets darshan and also an opportunity to do some seva(online)

Mayapur has always been my favourite Dham and have actually felt Mahaprabhus mercy in my life.

I live in the USA and never had an opportunity to physically perform the Navadvipa Mandala Parikrama, but I have an intense desire to do so. Gradually the sweet Gaura and Nitai fulfilled my desire. When I visited Sri Mayapur Dhama last year, I came across the wonderful book on Sri Navadvipa Parikrama and started reading it. Later, TOVP sent me a book Navadvipa Dhama Mahatmya by Srila Bhaktivinoda Thakura. After reading these two books, my desire to visit Navadvipa and perform the parikrama grew more intense. Finally by the causeless mercy of Lord Nityananda and Lord Caitanya (and of course Srila Prabhupada), I am able to visit the dhama by virtually performing the parikrama. The Supreme Lord Caitanya Mahaprabhu is Absolute. There is no difference between His name, form, qualities, pastimes, and abode. Similarly there is no difference between performing the parikrama physically, mentally, or virtually. I take solace in the fact that I am able to get the same mercy and blessings by performing the virtual parikrama as I would through physical parikrama. It is mesmerizing to hear from senior vaishnavas about the pastimes and significance of each place as they are slowly revealing the hidden secrets behind the dhama.

I realized how Krishna Consciousness is beyond all barriers. Although it was virtual, but the mood of the devotees who took us there, who described their glories and enthusiastic devotees who attended online, enlightened me. Although physically not together, but together in spirit, the parikrama became more ecstatic . Despite all the challenges the world and devotees community across the globe is facing, this parikrama nevertheless showered the mercy of Lord Gauranga to all of us, uplifting my consciousness and purifying my desires to serve the Dham and when things get better, visit those places and roll in the dust of the Dham!
I offer my humble obeisances at the dust of the lotus feet of the devotees, who tirelessly worked hard to make this parikrama special for us!