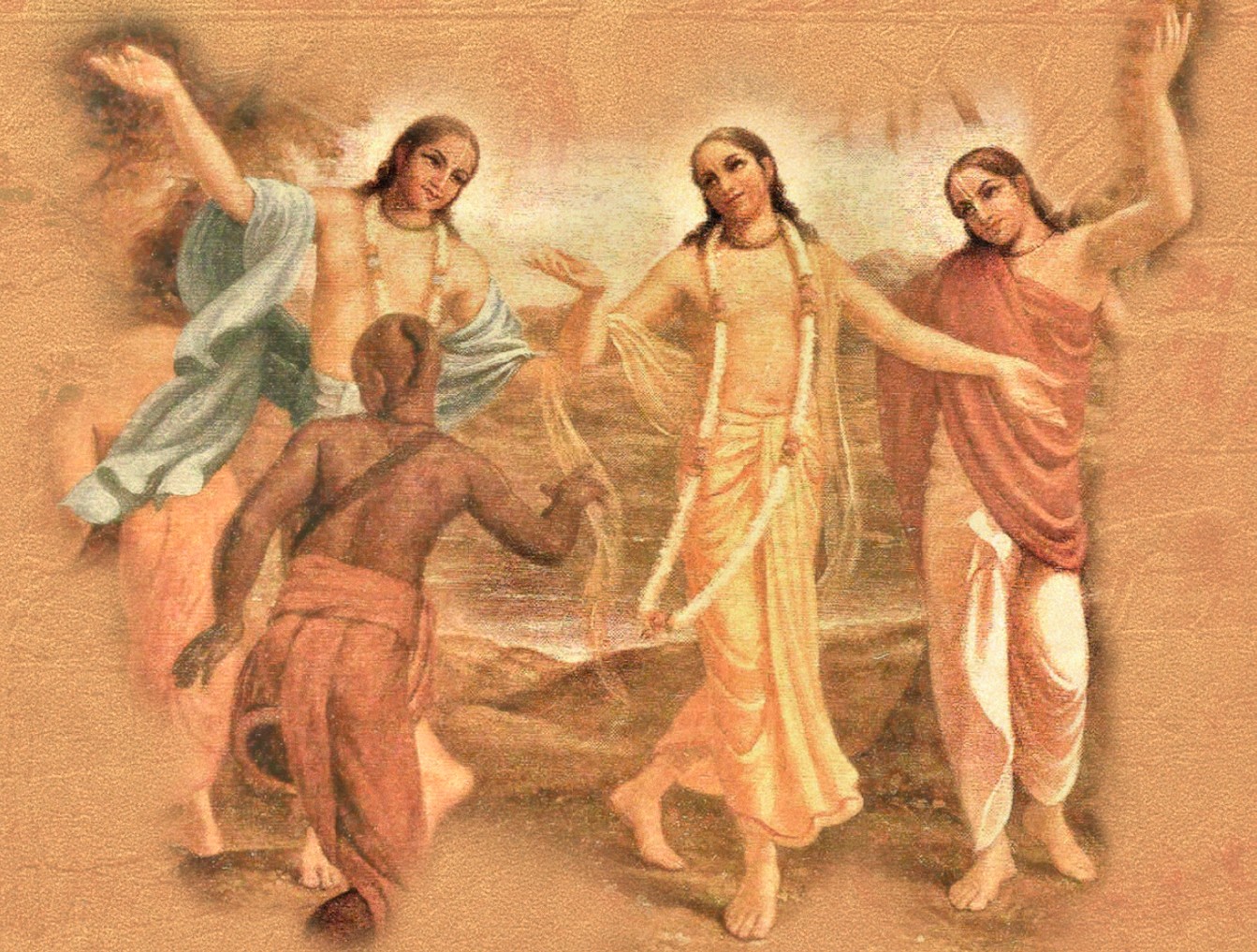 A child of Indian-born parents in America discovers herself in the context of competing cultures. 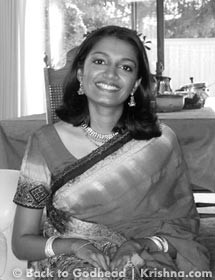 “So, tell me about yourself. Where are you from?” asked the chief resident in pediatrics at the University of Pittsburgh medical center, where I was interviewing for a residency position.

My answer started off something like this, “My parents are from South India, and I was born and brought up here in the U.S.”

Although his question implied that the place one is from has a central role in defining one’s identity, summing up my identity as an Indian-American made me uncomfortable. In fact, defining myself through my Indian and American backgrounds has always been a source of anxiety, which I find is best resolved on the spiritual platform.

Though born and raised in America by loving Indian-born parents, I always felt different from others. Neither school nor home provided me with a satisfying understanding of my identity. I almost blended into American life, only to find my peers exposing my “un-American-ness.” I recall how during a high school basketball game an opponent would call out, “I’ve got the Indian girl!” This label reduced me to a mere physical being, but I felt more than just physically different.

My way of life at home was centered on a Vedic atmosphere that my parents created for me and my brother. I was taught to read from the Bhagavad-gita every morning. I ate only prasadam, and we sang bhajanas as a family every night. But the minute I stepped outside the home, I entered the arena of an opposing culture in which my goal was to be as American as my peers. I wanted to dress and feel American, to feel comfortable in American skin. But was this possible when I knew the creator as a beautiful lotus-eyed boy named Krishna?

When I left home to go to college, I found myself surrounded by American culture. Since I was living in a dorm, I didn’t have a Vedic atmosphere to come home to. Ironically, this situation turned out to be the best formula for my future spiritual development. Outside the realm of my home, which was infused with Vedic culture, I began to investigate whether Krishna consciousness was right for me; did it provide all the answers to questions I had regarding one’s identity and the purpose of life? I liked what Srila Prabhupada had to offer as an answer to these doubts:

—The Science of Self-Realization, p. 72

Srila Prabhupada’s definition of identity, based on the soul’s relationship with God, made me realize that the tension I had been feeling in defining myself was based on the body, a body both Indian and American. Prabhupada suggested that I assume a higher consciousness, one that would enable me to see that I am an eternal spirit soul, beyond bodily designations. Even though caught between two worlds as an Indian-American, I felt that knowing I was part of Krishna, who is beyond nationality or race, could bring me a sense of peace.

Srila Prabhupada provided me with a solution to my struggles with identity, but I was still apprehensive about how I could apply this knowledge to my life. After all, I had chosen medicine as a career path; I was immersing myself in studying the body so that I could treat ailments of the body. How was I to reconcile the tension between my spiritual self and my need to fit into American culture as a part of my future career?

The inspiration for me to embrace Prabhupada’s message came when I learned, from Srila Prabhupada-lilamrita, more about Prabhupada’s life and how ISKCON began. I read how Prabhupada had provided the same answers to many young Americans seeking a higher purpose in life than American culture could offer. Innumerable young Americans wholeheartedly embraced Srila Prabhupada’s vision in the 60’s and 70’s, and they didn’t merely learn about Krishna consciousness—they chose to change their consciousness by nurturing their eternal relationship with Krishna. Vedic ways became their own, ironically mirroring how my identity as an Indian girl was shaped by American bodily preoccupations.

Satyanarayana Dasa, an acquaintance of my family, joined ISKCON in Buffalo, New York, in 1969 as a college student. He explains his initial attraction to the Hare Krishna movement:

It’s what the soul actually means that is the attraction. It means that I am eternal and never die, and that there is a wonderful and exciting spiritual world that I belong to. A self-effulgent and inconceivably beautiful world in which I have the deepest personal relationships that are ever-increasing in joy and happiness, and are enriched by pure, ever-increasing knowledge.

Knowing that the soul is eternal changes one’s perception of oneself and the world. The devotee feels “joy and happiness” in an eternal and coherent world filled with beauty, happiness, and knowledge. For many hippies and others of the 60’s and 70’s, there was no question of discarding Vedic philosophy, which provided the answer to the question “Who am I?” in a way that welcomes all nationalities. Devotees from all backgrounds confirm this universal accessibility of Vedic knowledge. They used their awakened Krishna consciousness to understand their true self.

Many distinguished scholars have appreciated the cultural implications of the Hare Krishna movement and have cited various reasons for its appeal. In Hare Krishna, Hare Krishna: Five Distinguished Scholars on the Krishna Movement in the West, Dr. Larry D. Shinn stated that young Americans joined ISKCON because they wanted “to turn away from materialistic self-gratification.” The philosophy allows one to “solve an identity crisis” by providing “a sense in which I can know who I really am; I am not my body. I am a spirit soul.” Krishna consciousness provides a well-grounded and all-embracing definition of identity.

The whole orientation toward a personal deity of compassion and concern, and of love, who is not just some kind of absolute, impersonal reality… but a Personal Being of infinite compassion, one who is concerned for those suffering in the world, appeals to something very deep within the human spirit…. It’s that kind of personal quality, it seems to me, that appeals to human beings across all cultural lines.

Hopkins’s analysis applies not only to Americans but also to Indians like my family and me, who have made America their home. Both groups are attracted to the “infinite compassion” and love that the Supreme Personality of Godhead, Krishna, provides. Personalism and the concern for human needs are universal concepts and not culture-specific values. Krishna consciousness appeals to the most fundamental human right: the right of the spirit soul to free itself from the shackles of material existence and feel unlimited happiness through love for God. Shinn and Hopkins both argue that the personal aspect of Krishna consciousness is its greatest attraction.

By revealing our true identity, Krishna consciousness gives peace. This principle works today, and it worked for Arjuna five thousand years ago during the battle at Kurukshetra, when Arjuna came to understand his true position as an eternal servant of Lord Krishna. Identifying himself by his relationships with kinsmen and friends, Arjuna was lamenting that he must kill his loved ones to win the battle. He told Krishna, “I do not see how any good can come from killing my own kinsmen in this battle, nor can I, my dear Krishna, desire any subsequent victory, kingdom, or happiness.” (Bhagavad-gita 1.31)

Arjuna then accepted the position of Krishna’s disciple, and Krishna, as the Supreme Guru, instructed him. Krishna told Arjuna that the origin of his anxiety is that he considers his identity in terms of his kinsmen and relatives, rather than as an eternal spirit soul, part of Krishna.

Krishna explained, “That which pervades the entire body you should know to be indestructible. No one is able to destroy that imperishable soul.” (Bhagavad-gita 2.17)

This key concept is fundamental in resolving Arjuna’s identity crisis. After understanding himself to be a spirit soul with the body of a kshatriya, he carried out his duty as a warrior in the service of Krishna. Prabhupada refers to understanding the difference between the body and the soul as the “ABC of spiritual understanding,” or the first step in Krishna consciousness.

The Hare Krishna movement began five hundred years ago in West Bengal, when Lord Krishna himself appeared as his own devotee, Sri Chaitanya Mahaprabhu. His movement eased social tensions among members of artificial castes; he taught that all are spirit souls with an eternal relationship with Krishna that’s full of eternal bliss and knowledge. Chaitanya Mahaprabhu’s prediction that Lord Krishna’s holy name would reach every town and village began to come true when Srila Prabhupada planted the seed of the holy name on American soil. Consequently, thousands of Americans revived their original Krishna consciousness, while many Indians discovered their own culture. ISKCON has offered everyone, whether encased in an American or an Indian body, a beautiful and comforting identity as Krishna’s children.

Living within a materialistic culture, I will always have to struggle to keep my Krishna consciousness intact. Yet many American-bodied devotees, confident and mature in their Krishna conscious identity, have not only integrated into American society but have greatly contributed to its rich diversity. One day, I hope to serve in Sri Chaitanya Mahaprabhu’s compassionate mission, which resolves beautifully my tensions. Lord Chaitanya declared:

“One who has taken his birth as a human being in the land of India should make his life successful and work for the benefit of all other people.” (Sri Chaitanya-caritamrita, Adi-lila 9.41)

Even though I wasn’t born in India, I’d like to take Lord Chaitanya’s instruction to heart. I’m an Indian-American in touch with Srila Prabhupada’s philosophy, so I feel well equipped with both cultures. That can help me in spiritual life. Prabhupada referred to the partnership of India and America as being perfect because India is the “lame man” and the U.S. the “blind man.” India is lame when compared to the U.S., with its material wealth and technological prowess. But India, with its Vedic heritage, can give Krishna conscious vision to the spiritually blind U.S., which can provide material resources for spreading spiritual realization. I feel fortunate to have both the lame man’s vision and the blind man’s resources within me, helping me fully embrace my Krishna conscious identity.

I know too that if I’m ever worried about anything spiritual or material, I can enter a Radha-Krishna temple, smell the spirituality of the incense and prasadam, hear the melodious music of Krishnakirtana, and feel right at home.