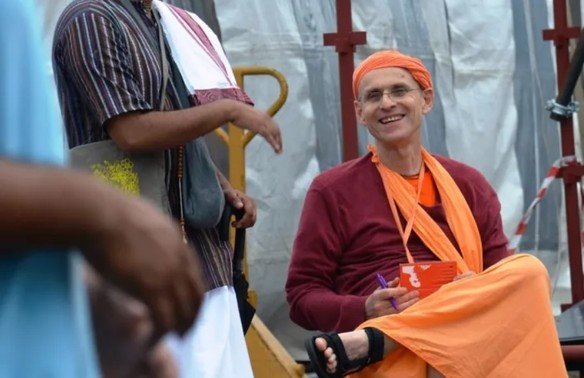 We have a family, we have a language, we have a culture and so on, and it seems like all this is a part of ourselves due to some sense of belonging. This is described, however, in the Vedic literatures as our false identity. It is explained that our true identity is totally different – we have actually no connection whatsoever with the place of our birth or culture. If one considers the land of their birth to be a part of themselves, is thinking that their body is themselves. It is then very difficult to come to a position of spiritual understanding. In the Srimad Bhagavatam, sages describe their vision or their real identity of not being their bodies, but the eternal souls. So, they were not concerned about the destiny of their bodies as they were not considering their bodies to be their true identities.

We have the story of Sage Dadhichi. It is said that Dadhichi was a great, powerful, ascetic personality. At one point, the demigods wanted to make a particular weapon from the bones of Dadhichi, because, due to all the austerities that Dadhichi had gone through, his bones would make for very powerful weapons. So, for saving the community of demigods, Dadhichi had to sacrifice himself. So the demigods came and humbly asked Dadhichi for his bones. Generally speaking, if someone asks for your bones, you would respond with, “Oh yeah, you can have my bones!” (laughter as Maharaj clenches his fist indicating that this would mean a fight) So, in this way, most people would get defensive if someone asked for their bones. But somehow, Dadhichi was agreeable to this request. He simply asked the demigods to wait for a moment until he first gave up his body. So therefore, Dadhichi had an incredible attitude and he was completely undisturbed by such a request due to detachment to his body.

We are not Dadhichi, but at the same time, we can take some inspiration and remember that this world and everything in it comes and goes. So, this is not the main thing in life. We are not looking for suffering – we are not going to give up our bones to someone who wants them. But at the same time, if we can put the eternal spiritual reality n the foreground, if we could give it more importance, our lives would drastically improve. So, this is what we need to do.

Tags: identity
E-mail me when people leave their comments –
Follow