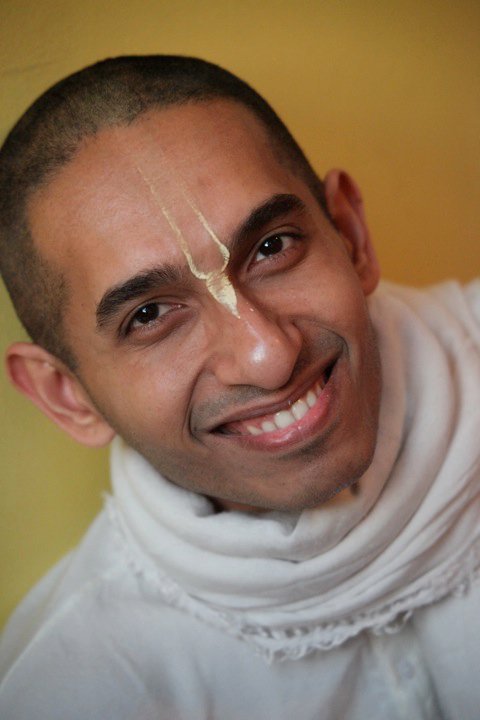 The 32-year-old monk isn't sure now where his next session will be. He'll keep following the protesters to lead meditation, though, convinced they will only roll back the inequality around them if they find equanimity deep inside.

"Anger won't solve anything," he told Reuters. "We have to work from the heart ... there is so much distrust now."

Das has been a discreet presence at the protests, leading short sessions before making way for other religious leaders to preach at a weekly interfaith service. What he doesn't tell is the unlikely story of how he ended up in Lower Manhattan.

A native of Mumbai, Das studied at the Indian Institute of Technology ( IIT) and moved to the United State in 2000 to work as a consultant with the accounting firm Deloitte.

After earning a masters of business administration (MBA) at Cornell, he started at Bank Of America in 2006.

His specialty was the technology, media and telecoms sector and he dealt in so-called structured products, including mortgage-backed securities -- "the things that blew up, the toxic products" as he put it in a telephone interview.

Das had studied this market but remained baffled by it even after he began trading. "I saw people I considered much smarter than I was, and they really believed in them, so I didn't open my mouth," he said.

As world markets began to crumble in 2007, a superior told him: "You have to realise this is a game of musical chairs; when the music stops, the person or bank that has the assets sitting on his books loses."

"The far-reaching consequences for the economy were not something he would foresee," Das said. His doubts grew until, the following year, he found himself working on a merger and acquisition project for Playboy magazine.

It struck him as absurd trying to sell sex when the economy was collapsing and people were losing their jobs. "It was not that I hated the industry or the people I worked with," he said. "But I began to see the shallowness in that world. I wanted to be part of something authentic and deep."

In fact, Das was already linked to that something. Since 2007, he had been living in a Hindu monastery in Manhattan's East Village. "I was living out of a large closet, with four suits and button-down shirts," he said. "I slept on the floor and lived the life of a monk."

Das had been practicing karma yoga, the Hindu path of selfless service to the divine, for a decade before moving into the monastery in 2007. As part of this active service, he used his $170,000 annual salary to help finance the monastery.

"Living in a monastery was a very strong safety belt to make sure I kept my inner core," he explained.

When he quit in late 2008, one Bank of America manager praised his courage and another said he was making the worst mistake of his life. Several colleagues confided their discontent to him and some also quit, he said.

Das admitted it was hard to give up the perks and prestige of the investment banker's life, but it wasn't what he wanted.

After a local newspaper recently profiled him, two high-flyers from the investment bank Goldman Sachs visited him at the monastery to discuss the financial crisis. "They're coming back again soon," he said.

Das sees his work as a kind of corporate chaplain who could help build character in managers and help avoid disastrous decisions made when short-term goals prevail. More regulation of the financial industry may be needed, but only a higher consciousness will help in the long term, he said.

Asked if protesters and profiteers could develop this higher consciousness, he said: "I keep my expectations low but at the same time I keep my enthusiasm high. "I've met so many people who want to make a change. To me, that's very inspiring."