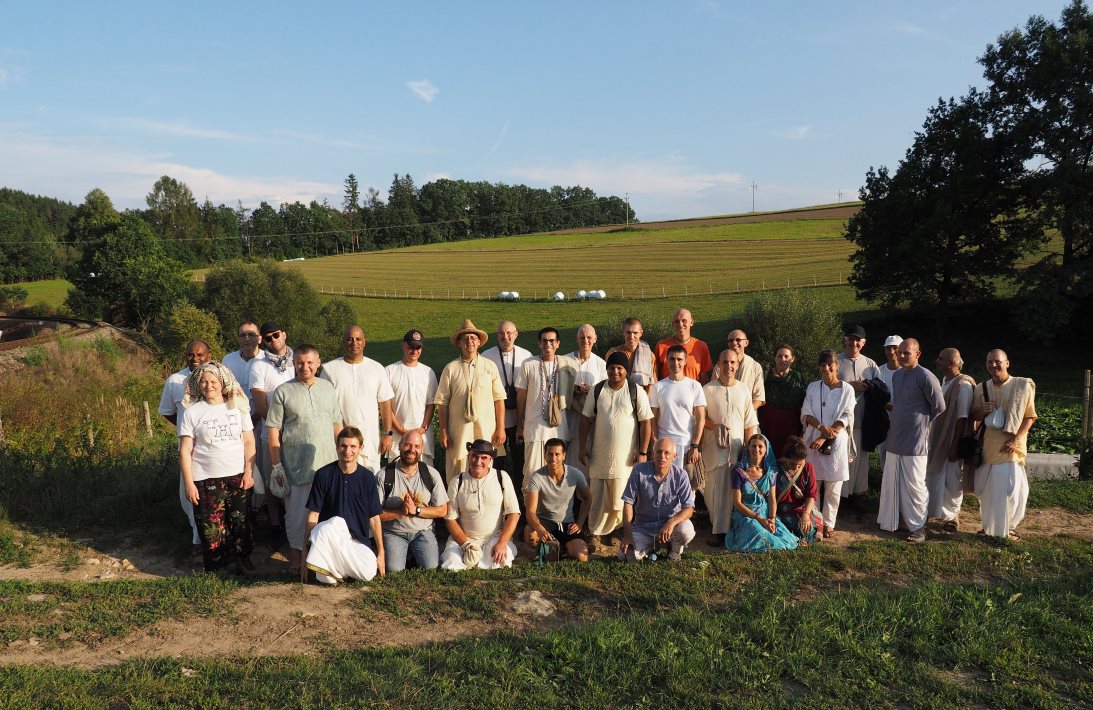 For the past 13 years ISKCON’s Ministry for Cow Protection and Agriculture (IMCPA) has organized a European conference for ISKCON farmers and anyone interested in agriculture and cow protection. The idea is to create networks and unite everyone towards Srila Prabhupada’s goals for cow protection and simple living. This year, 2019, the conference was hosted at the Krishna Dvur community in the Czech Republic between the 30th of August and the 1st of September. The participants were made up of the European regional representatives of the Ministry and many other key players with a committed interest in the realms of agriculture, cow protection, horticulture and rural development.

Everyone was treated to an exciting weekend in this ideal rural setting southeast of Prague where ISKCON has been running its farm community since 1977. About a dozen devotees directly live on or spend their day on the farm itself while another 80 devotees reside in the surrounding area and take part in the activities of the community including the Deity worship, festivals and spiritual programmes.

The participants were given a guided tour of the farm to its 40 hectars of fields of which 20 hectares are arable and 20 hectares are pasture and grass lands, and the barns, where 16 cows and bulls are being cared for. Premadatta Prabhu told how the cows are mostly Jersey with some Hungarian grey oxen. Two cows are currently giving 30 litres of milk per day between them. This is used by the temple from which they make butter, cheese and yogurt; milk products from outside are only bought during festivals.

The cows are rotationally grazed on 1 hectare strips which are changed about every 15 days. The farm grows its own hay and produces 100 round bales on 10 hectares of land plus their own straw for bedding (around 20 round bales per hectare). Each year the devotees also grow 25 tonnes of grains such as wheat, spelt, rye, buckwheat and peas; in addition there are also potatoes. The arable work follows a low till system where a covering crop is always planted to avoid bare land. The rotation systems consists of peas, wheat, rye and buckwheat.

Next, Radhavallabha Prabhu told about the vegetable growing in the vegetable garden of 500m2 which yields 1.5 to 2 tonnes of vegetables per year. This very productive patch of land only takes 300 hours of work per year and supplies the temple kitchen with most of its needed produce. Radhavallabha went on to tell how they specialize in drought resistant vegetables or at least grow the crops with little irrigation. Mulching plays an important part of their system to keep in moisture.

The tour also included a visit to the flour mill which has become a big business for the farm. In addition to the grain grown on the farm, 75 tonnes is purchased from outside to be made into flours and other ground products. Some of it is used in the bakery and the temple kitchen but most is sold at the market. The mill business is a main source of income for the farm. Five stone mills including the largest stone mill anywhere in middle Europe that can grind 500 kg in one hour are being run by two devotees who have milling and packing the flour as their full-time services. The devotees are producing quality flour which is in high demand around Czech. The bran left over from the milling business is fed to the cows.

Over the years the project has also developed other businesses so they are not dependent on donations. A bakery is producing a variety of products that are sold at farm markets as well as at the farm’s two restaurants, one in Prague and one in a local nearby town that the devotees are operating. There is also a honey production of about 1000 kgs per year and a fruit plantation that is planned to increase to 150 to 200 fruit trees.

On winding up the tour, Varnasrama Prabhu, temple president of Krishna Dvur, recognized that he doesn’t find the project complete; most of the labour in the fields is done with tractors and machinery. Much is to improve in order to come to the actual standard of self-sufficiency and reliance on the products of the cows and the land and the work of the oxen. This requires more devotees, however, so for now the farm is simply maintaining a stable situation which can then be upgraded whenever more devotees are ready to be part of the project.

Aside from relishing the scenery and quietude of the farm and the wonderful late-summer weather that graced the conference, the about 30 participants had talks on different farm related topics. At the opening session Kalakantha Prabhu, ISKCON’s minister for cow protection and agriculture, gave an overview of the work of the international ministry. He told how the continental farm conferences that started in Europe have been adopted in other parts of the world such as the USA, South America, India, Ukraine and the Baltic Region and Russia. Africa and Australasia will also soon hold such farm conferences.

An important GBC resolution from this year was especially the focus of a lot discussion:

Resolved: By Janmastami 2022 all ISKCON centres should develop a plan whereby all milk and milk products – butter, ghee, yogurt etc . – offered to the Deities are procured from protected cows. The centres may approach the International Ministry of Cow Protection for assistance.

The discussion targeted two audiences – the producers/farmers and the consumers/temples/devotees. As far as the farmers are concerned, Premarasa Prabhu who himself is heading up New Mayapur, a big farm community in Ukraine, explained how to establish good business plans for cow protection. Of course, devotees are not motivated by commercial interest. Still a business plan is needed to help avoid mistakes and make the service more efficient. Thus it is a plan for Krishna and the devotees and how to serve the cows and Krishna better.

Cow protection means a plan for life. Things needed to be considered include a description of the project with clear goals and purposes, sources of funding (voluntary donations or/and income from selling products), the schedule of the steps of the project, defining all the parameters such as land and cows, understanding the production process, the required manpower, equipment needs, legal issues, market possibilities, risk analysis, worst case scenarios and much more.

He also informed that as part of the mission in ensuring that cow protection is conducted with a long term view of sustainability the Ministry had the following resolution passed with the GBC:

Resolved: In order to start a cow protection project that will be accredited within ISKCON and accepted as an ISKCON supported project, a “Cow Protection Certificate of Readiness” needs to be obtained.

In Ukraine they are 100 km from the nearest big market. They decided that berries are a very effective use of land. They are organic and have a premium in the European market. The berries are picked, preserved by refrigeration and freezing and shipped to Europe.

Next Syamasundara Prabhu from the UK had an exercise with the participants to understand how much milk is required to cover the yearly needs of Deities at an ISKCON temple or centre. The group went through the logical steps to understand how dairy product needs are calculated into required milk yields and herd size of cows. For instance, if a Deity department requires 5 kg of ghee every week it becomes 260 kg per year. If 3 procent of the milk is pure butterfat, then 8.667 litres of milk are required to supply 260 kg ghee. If it is assumed that a cow will give 10.000 liters of milk over 4 years for each calf she bears, then about four actively milking cows will be required to supply this particular Deity department.

However, for the farmers to supply like this, the second audience, namely the consumers, i.e. temples and devotees, must pay a proper price for the milk. That was next discussed. A proper price may be somewhere around 5 euros per litre. This means that temples or whoever the consumers are will have to understand the value of milk. Of course, the first reaction will often be, ”But this is too expensive! In the stores you can get organic milk for one or one and half euro for one litre.” One participant brought up the point that this all a matter of a mental adjustment. If we are convinced about the value of milk then a proper price is not a problem. An example is the price that people are willing to pay for alcohol such as whiskey or vodka. A price for less than a litre of 20, 30 or 50 euros is not unusual – and that is for something that is harmful, gives you headaches and basically makes you unhappy and miserable! Still, some people are convinced of the value and therefore ready to pay such an exorbitant price. So what is the problem with paying a proper price for milk which is sattvic, healthy, produces fine brain tissue and makes one spiritually inclined? Milk is dharma in a liquid form; according to Vedic logic, artha or wealth comes from protecting dharma, so why should one be afraid of bankruptcy by paying a proper price for milk and supporting dharma?

Sitarama Prabhu from the UK then shared his experiences with running an actual ahimsa dairy farm. He outlined the starting and funding of the ahimsa dairy foundation. Initially he was working with an existing organic dairy farm but gradually took steps to be self-sustaining with his own land and own management system. Now he and the devotees of the Ahimsa Foundation have 48 acres of land in the village of Wing in Midengland near Leicester. A further 24 acres are being rented with an option to buy in 18 months.

It was a big endeavour to raise the funds to buy the farm. At first the devotees tried to get a bank loan, but as the bank wanted the cows as collateral Sitarama did not want to risk the cows so he preferred to loan from private individuals. Some of the funds were also provided by supporters on the promise of receiving a return in the form of milk in the future. Now the farm is run by milk sales that pay for the running operation whereas membership donations are used to pay back the loans and improve the infrastructure and development of the project which is a practical proof of how it is feasible to run a farm centered on the protection of cows.

Supplying milk from protected cows took up ninety percent of the discussion. But other presentations were also there. Devotees from New Vraja Dhama in Hungary explained how they are exploring self-sufficiency in cloth-making. They are growing flax and hemp and making material from it and also planning to get sheep for wool. At the conclusion of the conference Lalitanatha Dasa from Denmark gave a presentation about urban farming, making the point that farming, small-scale horticulture and self-suffiency the whole year around with vegetables, fruits and herbs are not limited to big farm projects in rural areas but is achievable for anyone with even a few square meters plot of land.

At the conclusion the participants voted on the conference for next year. An overwhelming majority took up Premarasa Prabhus offer to host the conference in Ukraine in 2020. Thus the European farm conference in 2020 will be held at the New Mayapur Ukrainian farm.