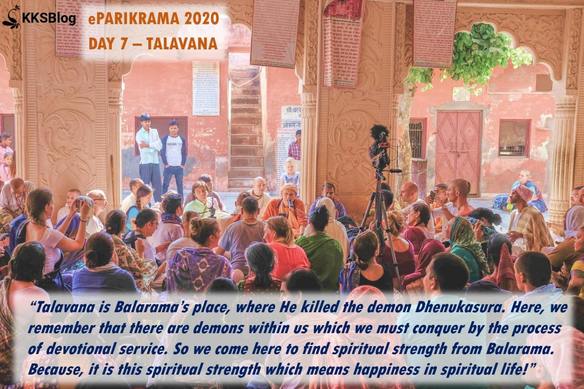 In 2018, His Holiness Kadamba Kanana Swami took us to Talavana, where Lord Balarama killed the demon Dhenukasura. We come here in prayer to Lord Balarama as He prepares the heart and gives spiritual strength. Check out Maharaja’s full kirtan and lecture below, along with a few photos, at Talavana during Parikrama 2018.

Lord Balarama is very much on our mind today. He carries a plough, used to prepare the ground for planting. Balarama is the one who prepares the heart. Krsna is the instructor, the speaker of the Bhagavad-gita, and Balarama plants the transcendental knowledge within our hearts. “Bala” means strength so Balarama is the giver of spiritual strength. He has that strength because He is serving Krsna in unlimited ways: as His personal paraphernalia, His bed, shoes and the instruments we use in kirtan. Even the kartals should never be put on the ground because it is Balarama. He is also the basic energy of the spiritual world or the sandhini-sakti, the existence potency. Everything is resting on Balarama.

This is Talavana, which means it is Balarama’s place. We remember, that one day the cowherd boys had been out in the forest the whole day and were getting hungry. There was nothing much to eat on the way, just a little pasta (just as we ate this morning) (laughter), and it was not sufficient because it digested quickly. They had just walked past this Talavana forest when they saw these tala fruits in the palm trees which smelled so sweet. All the cowherd boys said, “Oh, we are starving! We really need some glucose to get the blood sugar going”, or whatever the equivalent was in those days (laughter). So when Krsna went to get those fruits, Dhenukasura was there, along with his ass-like associates who were not overly intelligent. These were not ordinary asses. They were man-eating asses. They even had fangs. Rather heavy dudes! (laughter) Balarama took the lead in shaking one of the tala trees and many of the fruits fell. The cowherd boys grabbed some and ate them to satisfy their immediate hunger but then Dhenukasura heard the noise. He came storming at Balarama and kicked Him. Balarama caught his hind legs and started swinging him around threw him into a tala tree. I think you all know the domino game, where one piece falls causing many pieces to fall over. When one tree went down, it would knock over the next tree, and then the next, until the whole forest went down. This was not good for the cowherd boys’ fruit but suddenly they were not hungry anymore. Krsna joined in and many of Dhenukasura’s associates came. Krsna and Balarama made a sport of throwing the asses into all the trees and it was a lot of fun!