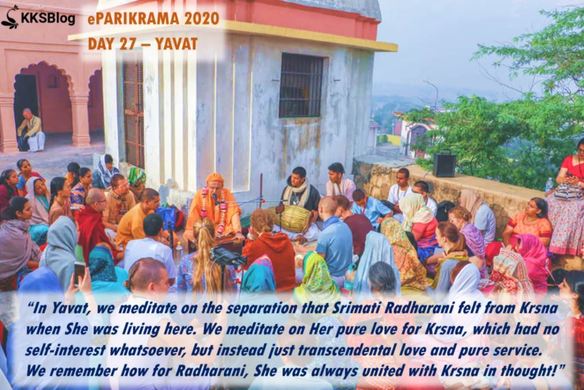 In 2016 and 2019, His Holiness Kadamba Kanana Swami took us to Yavat, where Srimati Radharani was residing in separation from Krsna, after her marriage to Abhimanyu. Check out Maharaja’s full kirtans and lectures, along with a few photos, during Parikrama 2016 and Parikrama 2019.

The purpose of Abhimanyu, Jatila and Kutila was to increase the eagerness of Radha and Krsna to meet each other. Abhimanyu was never in competition with Krsna, but rather he was simply a shadow of Krsna. Radharani was always watched by Her in-laws. She was never on Her own, so She and Krsna always had to make secret plans to meet. We have the story where Radharani swapped Her clothes with Subala (Krsna’s cowherd boy friend) in order for her to go out to meet Krsna. Jatila thought Radharani was Subala and allowed her to leave the house. Durvasa Muni had given Radharani a benediction that Her cooking would always taste like nectar and bring auspiciousness as well as long life, so Mother Yasoda requested that Radharani cook for Krsna. Paurnamasi persuaded Jatila to let this happen. Therefore, She was sent daily via a palanquin to cook for Krsna, much to Their delight!