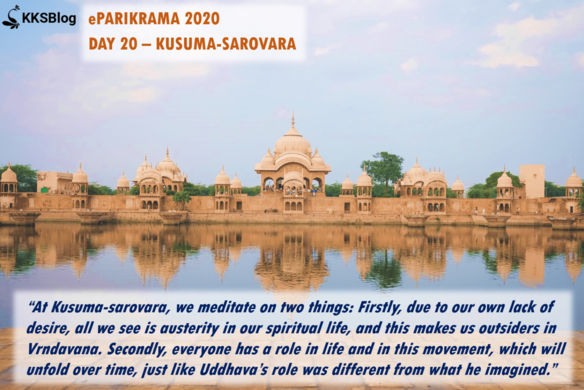 It is so peaceful in the morning at Kusuma-sarovara. It is a place we all know, a place that is transcendental. The gopis collected different flowers here. Srimati Radharani made her vaijayanti garland for Krsna. It is a long garland, made of five different types of flowers and it hangs below His knees. Every day, She made a new arrangement and somehow that garland would be delivered to Krsna. In this way, the land of Vrndavana is transcendental.

Behind Kusuma-sarovara, towards the right, is Uddhava-kunda. Uddhava was the perfect messenger, and he became a messenger twice. He was sent to Vrndavana as messenger and at the end of Krsna’s life on earth, Krsna met with Uddhava and extensively instructed Him. That conversation became the Uddhava-gita which is found in the Eleventh Canto of the Srimad Bhagavatam. The Uddhava-gita is in some ways more elaborate, asking many questions which are not addressed in the Bhagavad-gita. The Uddhava-gita is actually a very important Gita. There are various Gitas in the Bhagavatam; there is the Uddhava-gita, the Gopi-gita (the songs of the gopis in separation from Krsna), and the Bhumi-gita. The Bhumi-gita is the song of the Earth: “Many rulers have tried to possess me but what is left of them? Only names.” The Uddhava-gita was spoken because Uddhava was chosen to remain on this planet after Krsna left. He was to go to Badarikasrama and meet many devotees there.