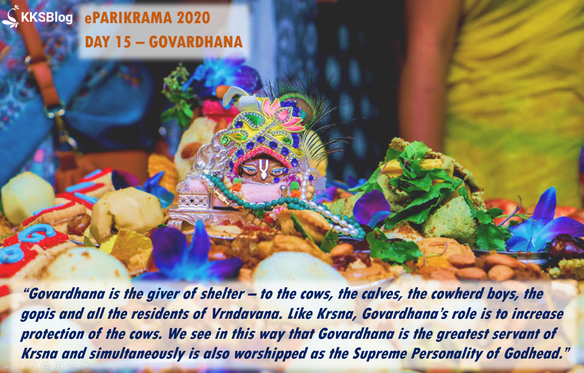 In worshipping Krsna, we are also worshipping the cows because Krsna and His cows are inseparable. Krsna is always thinking of the welfare of the cows. Krsna is therefore making many arrangements for the cows to be taken care of. The land of Braja or Vrndavana is described as Gokula, the land of the cows. Goloka Vrndavana is the eternal spiritual world and is also known as the abode of the cows. On this day of Govardhana-puja, Krsna convinced his father to not make an offering to Indra and instead make arrangements to worship Govardhana and also the cows and brahmanas in particular. So Krsna ensured that whatever was brought for the sacrifice to Indra was now used in service to Govardhana. So the residents of Vrndavana worshipped the cows and fed everyone extensively – no species were going hungry and everyone was provided for. That is the spirit! In worshipping cows, the human society remains protected. In worshipping cows, life becomes auspicious as everything offered to us by the cows is auspicious.

Govardhana has also been described to increase the pleasure and welfare of cows (“go” meaning cows and “vardhana” meaning to increase nourishment). By producing so many grasses and fresh water, Govardhana provides for the health of Krsna’s cows. Govardhana is also described as the greatest servant of Krsna. In fact, Caitanya Mahaprabhu, after receiving a Govardhana shila, was worshipping Govardhana as the Supreme Personality of Godhead. This can be interesting to understand, but we remember how Lord Balarama is also worshipped as the Supreme Personality of Godhead who is simultaneously the greatest servant of Krsna. The Lord manifests Himself in many forms and amongst these forms, there is one form out of which all the other forms appear, and that original form is Krsna. So in this way, Govardhana is Krsna but now manifesting in the mood of a servant, and that is why we worship Govardhana.