Journey of a young millionaire, who blends spirituality with entrepreneurship.

It's evening; a young Bengali gentleman sitting in his office in Kolkata completes a webinar on entrepreneurship and moves on to an online TV interview. Interviewer asks him questions relating to investment, business and startups and he answers them all with fervid expressions. Being in limelight, guiding budding entrepreneurs, focusing on resolving queries and making people think differently is a routine for him.

This great-great-grandson of India’s well-known freedom fighter and poetess Sarojini Naidu is a multi-faceted personality. He is the Managing Director of East India’s largest startup incubator, Kolkata Ventures (it is among one of his businesses), having its presence expanded to 5 countries now. He has been in the White House panel for entrepreneurship education, a recipient of 150+ awards; featured by most of leading newspapers in India & US, a former startup advisor to the Prime Minister of Nepal, a guest lecturer at India’s premier institutions IITs (Indian Institute of Technology), a spiritual practitioner and seeker, and a TEDx speaker. In spite of having achieved all of it at a very young age; Avelo Roy is humble, simple and dedicated to the great cause of Krishna Consciousness.

Born in a Bengali brahmin family in Kolkata, Avelo was always looking forward to solve problems. His father was a businessman and his mother, a politician. As he grew up in India, he got westernized owing to his upbringing, reading of foreign writers, studying in ICSE Board School and at the Cambridge. 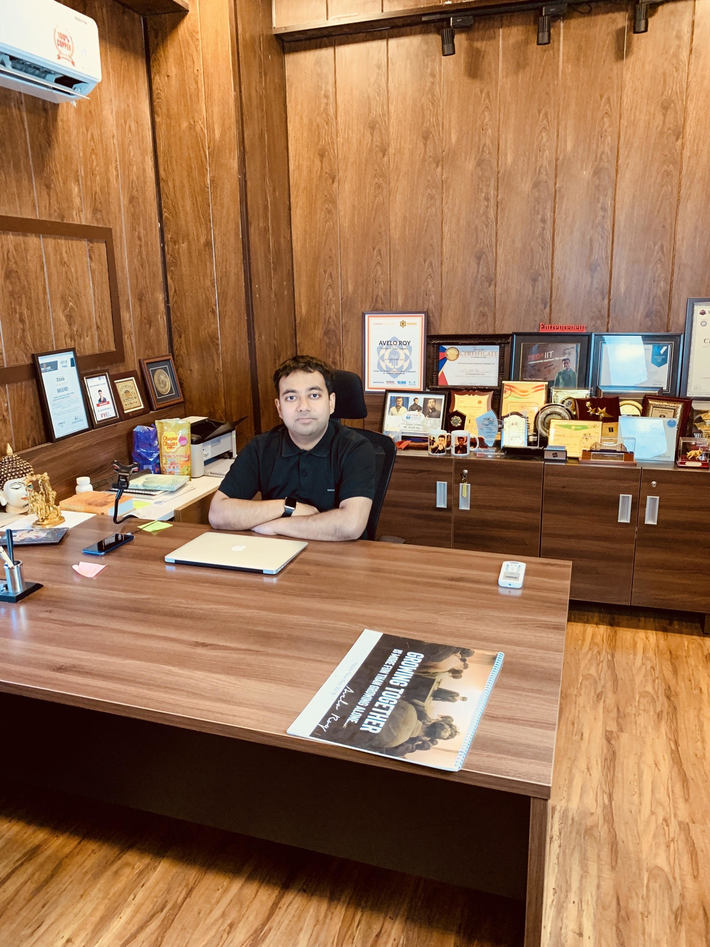 Avelo Roy at his office in Kolkata, India

Avelo did his Bachelor of Science in Computer Engineering from the prestigious Illinois Institute of Technology, USA. Indians who live abroad usually get westernized, materialistic and disconnected from India, but with him, it was the other way round. In USA, he wasn’t trying to copy the westerners, nor did he try being someone he wasn’t. He was active in co-curricular activities and in politics and entrepreneurship clubs. Avelo Roy (sitting in extreme left) with his friends in USA

In America, he saw Indian and Pakistani students smoking the most; whereas, Americans had rejected it a few decades ago, knowing the harms and dangers of addiction to tobacco well. He visited pubs and clubs with friends, but never had alcohol, cigarettes or drugs, since intoxication was looked down at in his family. The sanskaras(personal sacraments, impressions and dispositions) he got, always stopped him from doing anything ‘wrong’. Avelo stresses the importance of good parenting in molding the personality and behavior of a person.
In USA, Avelo got the coveted freedom and opportunity to do what he wanted to. He went ahead choosing entrepreneurship as a way of expression and spirituality as the foundation.

ISKCON (International Society for Krishna Consciousness), which is well-known for its youth preaching initiatives, had organized a preaching program at his college, and it was through that program that he got introduced to ISKCON. This event eventually became the defining moment that changed his life forever.

His Views on the Bhagavad-Gita

Avelo’s first impression of Krishna’s devotees in USA was majorly with non-Indian sincere practitioners, who inspired him, a lot. They were kind, compassionate and non-judgmental. This pulled Avelo’s attention and made him believe that there is something to the knowledge of Srimad Bhagavad-Gita which deserves attention from him and he should probably give himself fully to it. Chuckling with joy he says, “That is when the transformation took place. I got ‘brainwashed’, thank God my brain got ‘washed’.”

“What makes the Bhagavad-Gita different from other books is that it is the creator’s perspective; it is coming from the engineer of the creation. It talks about higher principles based on universal laws which have been created by Krishna personally. The words of Gita were relevant 5100 years ago, they are relevant today and they will always be relevant. It is meant for everyone. Krishna himself shares in the Gita, how to study the Gita. It is ‘as it is’ and has been carry forwarded by amazing teachers in disciplic succession, without any alterations”, says Avelo. 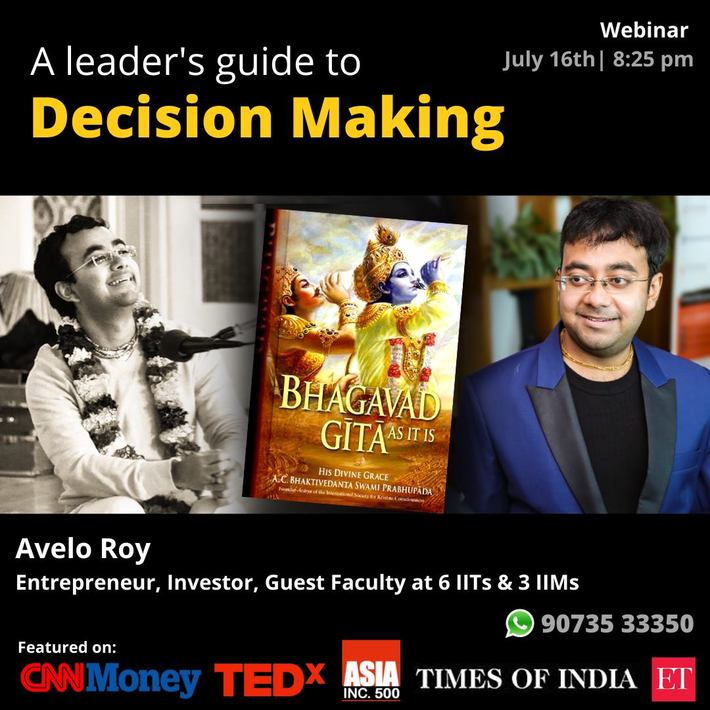 ePoster of Avelo’s session on the Gita


Avelo Roy is an initiated (one who has received ‘diksha’ or has officially become a disciple) devotee of Krishna and his initiated name is Ajita das. He proudly calls himself an ‘aspiring servant of Krishna’.

Avelo sees Srila Prabhupada as the mahatma who established Krishna Consciousness facing hardships and trials all his life. He exclaims, “Look at how much Srila Prabhupada cared for us, though he never even saw us! He never publicized himself, kept himself away from limelight, and put Krishna in the center. That is why his purity is so stark and we glorify him even after generations. He went to USA at an advanced age to serve the suffering humanity, sleeping for just 2 hours a day, writing books, so that we can utilize them.

There is a huge debt on our shoulders, which we cannot repay, but we can at least try to give it forward. This is what inspires me. How can I do something to share Krishna Consciousness with the world? Because I want to add to Srila Prabhupada’s movement, I want to give back in my own insignificant way. I compare myself to the squirrel who helped Lord Ramchandra build the Ram Setu(bridge to Lanka) by carrying small pebbles needed for the construction of bridge.

Ajita Das (Avelo Roy) is on the board of advisors at ISKCON news. He is also the Marketing and Communications Advisor to ISKCON temples in Europe and North America. Real success is transformation of lives. Avelo gives example of a girl who was a student at his college. She was borderline autistic which limited her ability to socialize or communicate clearly. After coming in touch with Krishna Consciousness, she started chanting Hare Krishna maha mantra, despite facing resistance from her own family. She would chant in college and then go home. Krishna Consciousness opened her up and transformed her personality. She made devotee friends. Started serving in various projects like ‘Krishna Lunch’. By the time she graduated, she had already received three job offers! This shows how much Krishna Consciousness can transform a human being.

Like her, he has seen hundreds of people turning away from drugs, stealing and other bad vices, becoming better and more responsible citizens of the world. This is Lord Chaitanya’s magic! Over and over again, he had the fortune of witnessing the mercy of Lord Krishna, witnessing the magic of Bhagavad-Gita acting out in people’s lives and this is his definition of success. 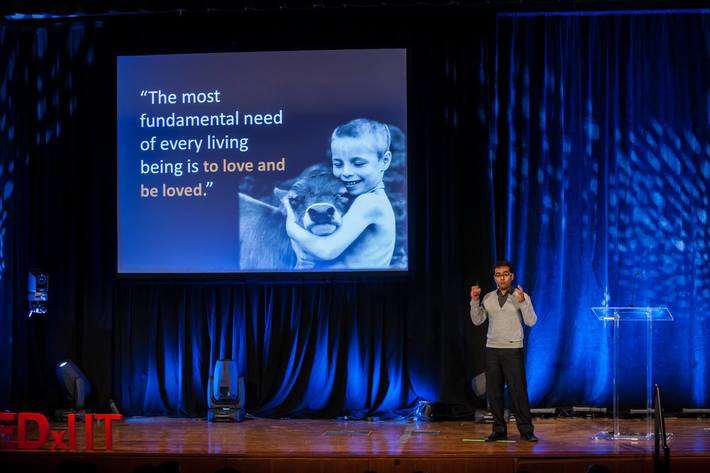 Avelo Roy during a session at IIT's TEDx

Wherever he meets someone of prominence, he gifts them the Bhagavad-Gita As It Is! What he has achieved in life lets him meet some of the most successful people in the world, and there, he sets an example by upholding Vedic standards of living. It also creates the perfect opportunity to speak about the benefits of Vedic philosophy and yogic lifestyle. He then tells them that the ‘Gita is the secret of his success’, it expedites success. Many CEOs (Chief Executive Officers) tend to read the Gita and appreciate the 5100 year old teachings of Lord Krishna.

A great way of promoting the Gita is to follow its learning and giving it to people. Vedic culture teaches sense control. Eyebrows are raised when people see him not indulging in smoking, drinking liquor, or even tea and coffee. 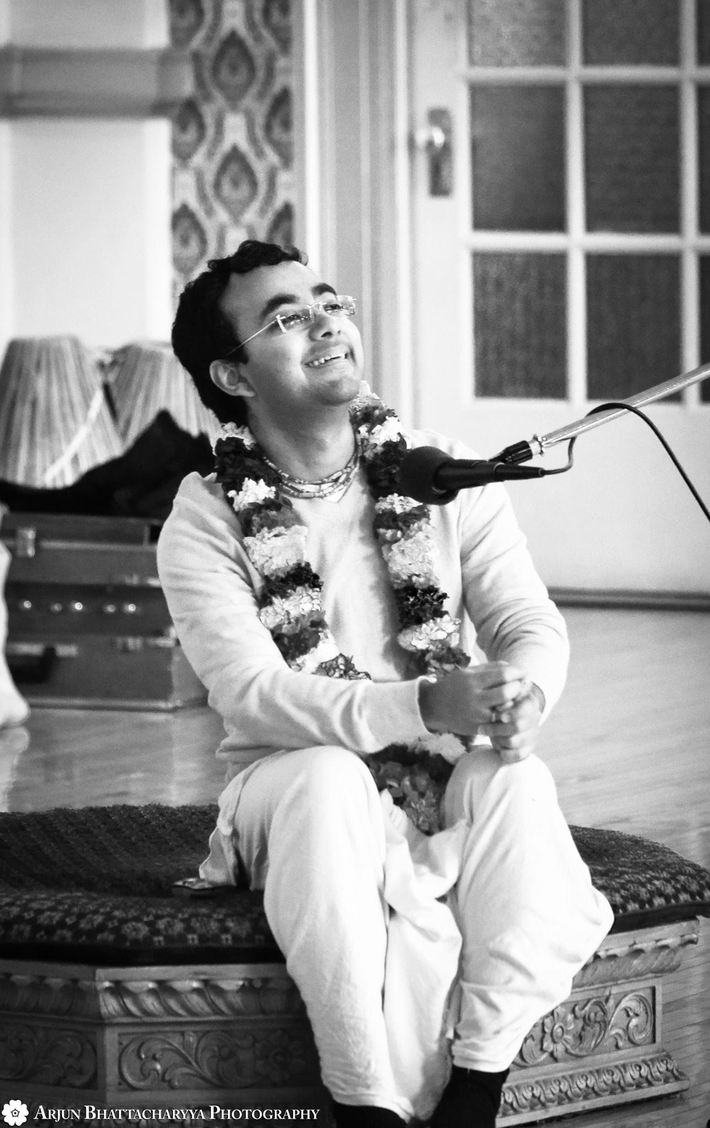 
From Victim to Victor

Dr. Krisztina Danka (Krishna-lila Dasi) from New York whom Avelo met at an ISKCON event interviewed him and expressed her desire to make a documentary film on him. He thought she was joking, but she was serious. After 3 months, she pursued him and came up with a documentary on his life and journey from a being a bullied school kid to becoming a Krishna Conscious entrepreneur. The documentary film made in coordination with prestigious New York Film Academy grasps Avelo’s life in 10 minutes. Many experts in filming circle have appreciated it. This film is a hope for those who feel demotivated and dejected.

Traversing through difficult times strengthens Avelo’s faith in Krishna. Krishna’s presence becomes clearer to him and takes him closer to God during his suffering. He serves as an example for those who feel devotees and spiritually inclined individuals are materially impoverished, incapable of ‘making it big’ and losers in life. His conduct, faith in God and success in life has drawn many thousands of people all across the globe towards Lord Krishna and will continue to do so. 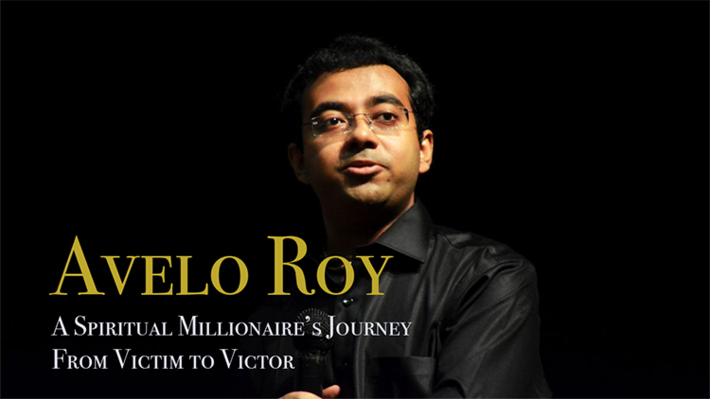 From Victim to Victor: An Inspirational Short Film about a Spiritual Entrepreneur

This article is written in October 2020, based on interview of Ajita Das (Avelo Roy) by Premanjana Das (Pranjal Joshi) via webinar.

Get in touch with writer Pranjal Joshi at pranjal280@gmail.com

Get in touch with with Avelo Roy at avelo@aveloroy.com
https://aveloroy.com/ is the official website of Avelo Roy

Producer-Director of Karuna Productions; Krisztina Danka, PhD is the director of Avelo Roy - A Spiritual Millionaire's Journey from Victim to Victor https://youtu.be/tfg4RrS3yKE