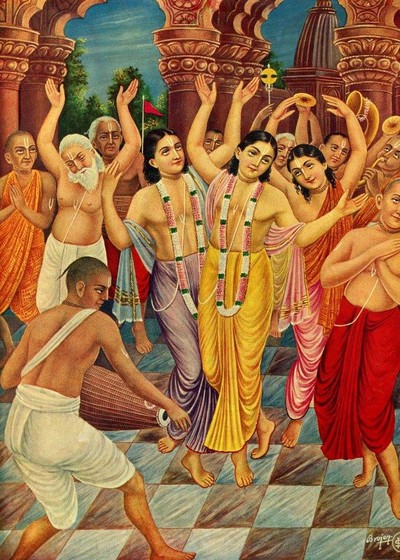 Transcendental sound is echoing around the world. The world which is egg-shaped and hollow inside, consists of several layers. All these universes clustering together are flowing from the pores of Mahavishnu. Srila Prabhupada explains creation. Krsna expands himself in the form of Mahavishnu from whose breathing an innumerable number of universes emanate. In each of these universes, Mahavishnu enters as Garbodhakasayi Vishnu who lies on Sesa Naga on the Garbha Ocean. From his navel, Bramha is born and he creates all living entities. Krsna further expands himself as Ksirodakasayi Vishnu and enters everything – even into the minute atom.

We have nothing to be so proud of. Our mind is occupied, “I am the centre of the Universe.” Krsna is there but in the background. When will Krsna be the centre of our lives?

Kirtan carries us. Everyone is making noises on their various tools. Sound carries us. The Mahamantra carries everyone. During the early days of ISKCON, in 1966, everything was there. Krsna Consciousness was in the heart. The essence of Srimad Bahgavatam and spiritual life, even without the details, was in the heart. Now we have all the details – how to fast on ekadasi and how to break our fast on the next day. So many technical details. How to pay obeisances – 5/7 parts of the body touching the ground. Everything is mentioned in the Hari Bhakti Vilas.

We have different species of living entities – plants, animals, human. Very few are civilized and have a connection with the Vedas. Most practice only lip service. Rupa Goswami said that 500 years ago, India was different. There was no Bollywood, no chai – nothing. Now we think that because of these things, we are very Indian. But 500 years ago nothing existed.

This movement offers the opportunity, the eagerness required to become a pure devotee. We have the opportunity of beginning the day with an offering to the Lord. No day is ordinary, everyday is special. Different days are linked to different planets. All that matters is what we really want to do. Come to that stage of pure devotional service. Create an inventory of what we have tried today. Have we read enough sastra or it could have been more, have we finished our rounds and how nice they were? Through all these things, we can see what have we offered to Krsna and like this, we go to sleep. We should try again and again, each day to have the opportunity to do something. In this way, we should take advantage of all the opportunities. Not wait, “Oh, when? When will Krsna Prema come?” In the Bhakti Rasamrita Sindhu, it is mentioned that when the cowherd boys wake up in the morning, their hairs stand on end in ecstasy. Our mornings in spiritual life should not be like an old car where a push is needed, it should be able to start with enthusiasm.