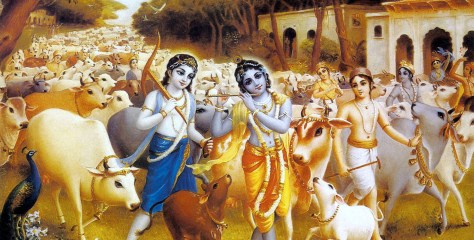 It is said that there is a herd of cows and these cows are all a personification of the upanisads. The gita-upanisad is the best of these upanisads. The cows are being milked by Gopalananda, being Gopal, the son of Nanda Maharaj. His pārtho, being Arjuna, is the calf that creates the milk. And sudhīr is the bhoktā, the wise person who is drinking that milk, the one who is enjoying that milk. In this way, the nectar of the Bhagavad-gita is enlivening the great souls.