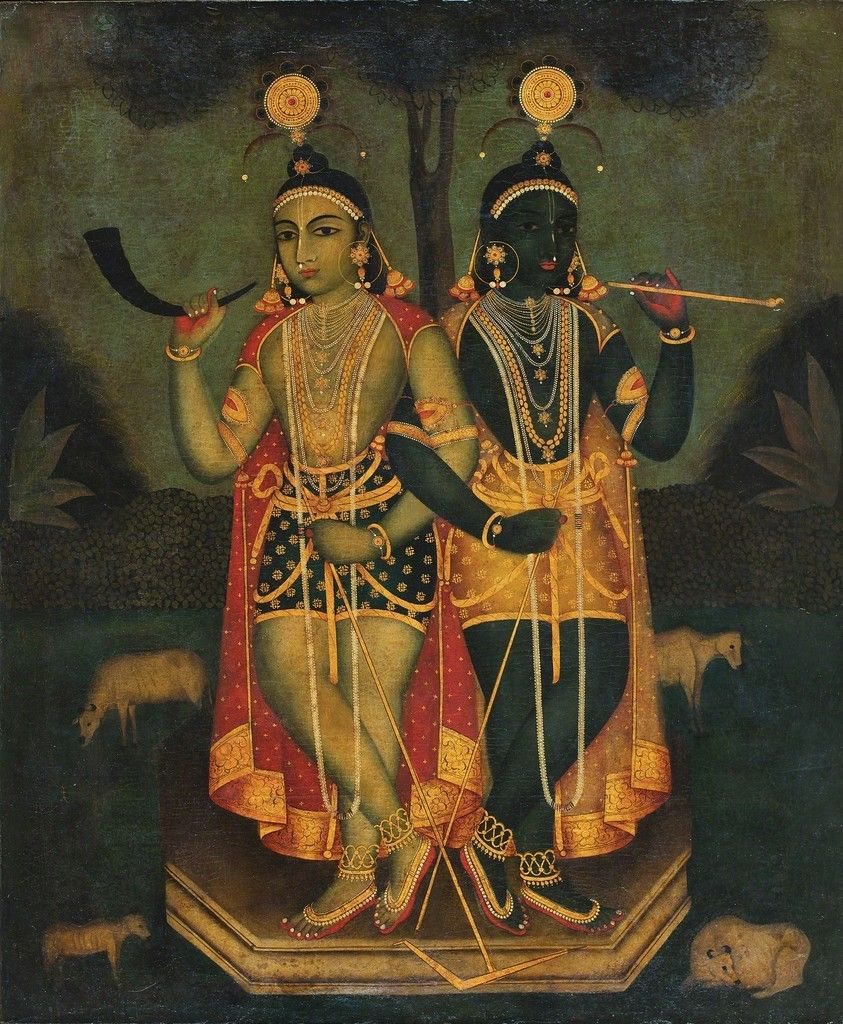 God is one. Moreover, according to Caitanya Mahaprabhu, that one God is Krishna, the cowherd boy of Vrindavan, who chooses to expand Himself unlimitedly still remain the same one Supreme Person, just to increase His own pleasure. Śrīmad-Bhāgavatam (1.3.28) designates this original Godhead as svayam bhagavān: Kṛṣṇas tu bhagavān svayam.

The Supreme Personality of Godhead has three primary energies. The first is antarańga–śakti, or the internal potency. The second is known as taṭastha–śakti, the marginal potency or ‘jiva sakti’. The living entities constitute the marginal potency, and they are situated between the internal and external Potencies yet the living entity is also spiritual. The third is called bahirańga–śakti, or ‘māyā sakti’ illusory Potency or the external potency / energy known as illusion, which consists of fruitive activity (karma).

Viṣṇu Purāṇa (6.7.61): viṣṇu-śaktiḥ parā proktā kṣetrajñākhyā tathā parā avidyā-karma-saṁjñānyātṛtīyā śaktir iṣyate -Lord Kṛṣṇa naturally has three energetic transformations. He is embodiment of multifarious, inconceivable spiritual potencies. parāsya śaktir vividhaiva śrūyate! svābhāvikī jñāna-bala-kriyā ca!!(Svetasvatra Up 6:8) – Each potency acts quite naturally (svābhāvikī) in sequences providing Him full knowledge (jñāna), power (bala) and pastimes (kriyā). parā sakti’ : Also known as internal potency ‘antaranga śakti’ Although this inherent spiritual potency is one, it manifests in three features Bala : strength and opulence called ‘sandhini’, jñāna: knowledge called ‘samvit’ and kriyā : pastimes known as ‘hlādini’. Kṛṣṇa says: daivī hy eṣā guṇa-mayī mama māyā duratyayā — This divine energy of Mine, consisting of the three modes of material nature, is difﬁcult to overcome. Being conducted by divine will, material nature, although inferior, acts so wonderfully in the construction and destruction of the cosmic manifestation. The Vedas conﬁrm this as follows: māyāṁ tu prakṛtiṁ vidyān māyinaṁ tu maheśvaram.“Although māyā [illusion] is false or temporary, the background of māyā is the supreme magician, the Personality of Godhead, who is Maheśvara, the supreme controller.” (Śvetāśvatara Upaniṣad 4.10) hlādinyā saṁvid-āśliṣṭaḥ sac-cid-ānanda īśvaraḥ –The Supreme Personality of Godhead, the supreme controller, is always full of transcendental bliss and is accompanied by the potencies known as hlādinī and saṁvit. (CC Madhya 18.114)

Trying to convey to Sanātana Gosvāmī something of the extent of one-fourth of Kṛṣṇa’s energy, Caitanya Mahāprabhu cited an incident from Śrīmad-Bhāgavatam in which Brahmā, the lord of the universe, came to see Kṛṣṇa at Dvārakā. May I inquire if there are other Brahmās besides me? “Upon hearing this, Kṛṣṇa smiled and at once called for many Brahmās from many universes. The four-headed Brahmā then saw many other Brahmās coming to see Kṛṣṇa and to offer their respects. Some of them had ten heads, some had twenty, some had a hundred and some even had a million heads. Indeed, the four-headed Brahmā could not even count the Brahmās who were coming to offer their obeisances to Kṛṣṇa. Upon seeing this wonderful exhibition, the four-headed Brahmā became nervous and began to think of himself as no more than a mosquito in the midst of many elephants. As each of the Brahmās saw Kṛṣṇa, each thought that He was only within his universe. . Upon seeing this, the four-headed Brahmā at once fell down at the feet of Kṛṣṇa and said, “What I thought about You at first was all nonsensical. Everyone may say that they know You in perfection, but as far as I am concerned, I cannot begin to conceive how great You are. You are beyond my conception and understanding.” “This particular universe is only four thousand million miles broad,” Kṛṣṇa then informed him, “but there are many millions and billions of universes which are far, far greater than this one. Some of these are many trillions of miles broad, and all these universes require strong Brahmās, not just four-headed.” Each universe is made up of 8 elements. Each one is 10 times larger than previous.

Lord Brahmā after he had stolen Lord Kṛṣṇa’s calves and cowherd boys and Kṛṣṇa had exhibited His transcendental opulence by re-creating all the stolen calves and cowherd boys by His viṣṇu-mūrti expansions. After he had seen this, Brahmā offered the following prayers to Lord Kṛṣṇa: guṇātmanas te ‘pi guṇān vimātuṁ hitāvatīrṇasya ka īśire ’sya
kālena yair vā vimitāḥ sukalpair bhū-pāṁsavaḥ khe mihikā dyubhāsaḥ – “Scientists and learned men cannot even estimate the atomic constitution of a single planet. Even if they could count the molecules of snow in the sky or the number of stars in space, they cannot estimate how it is You descend on this earth or in this universe with Your innumerable transcendental potencies, energies and qualities.” (SB 10.14.7)

jānanta eva jānantu kiḿ bahūktyā na me prabho manaso vapuṣo vāco vaibhavaḿ tava go-caraḥ (SB 10.14.38) – There are people who say, “I know everything about Kṛṣṇa.” Let them think that way. As far as I am concerned, I do not wish to speak very much about this matter. O my Lord let me say this much: As far as Your opulances are concerned, they are all beyond the reach of my mind, body, and words. Total Material energy- Mahat Tattva-is inferior energy yet it is very powerful and very difficult to overcome. “daivī hy eṣā guṇa-mayī mama māyā duratyayā (Bg 7.14). Manifestation of Total Material energy is temporary. It is only one breath of Mahā Vishnu an expansion of expansion of Lord Kṛṣṇa. Lord Brahmā the secondary creator of this universe has gigantic form. . He created all these planets by receiving creative energy (śrṣṭi-śakti) from Krishna. From his abode Brahma Loka-Satya Loka he observes activities of all 14 planetary systems.

Among the 14 planetary systems only three systems, bhur-loka, bhuvar-loka and svar-loka are visible to human eye. No upper or lower planets are visible to us. Thus all the stars and planets we see in the night sky, even with the aid of a telescope, belongs to these three planetary systems, with a few rare exceptions. Following is the illustration of the comparison of some visible planet as described by modern day scientists: It shows that the biggest planet is Antares and next big is Arcturus, next is sun. Smaller than Sun is Jupiter, smaller then that is Saturn, then Venus, and Earth. Smallest is Pluto. Compare to Antares (assuming a size of an orange) sun is one pixel in size. Compared to Sun Earth is a small dot about three pixels. So compared to Antares earth is invisible.

As described above the compared to Antares earth is invisible. Sun is ninety millions miles away from earth. Sun is so powerful that its pin size portion can burn entire USA. The light of the sun and the moon is also originally emanating from the brahma-jyotir, which is the impersonal effulgence of the Lord. Kṛṣṇa, by His different energies, diffuses heat and light through the agency of electricity and the sun. Kṛṣṇa says He is the light of the sun and the moon – prabhāsmi śaśi-sūryayoḥ. That prabhā is just a small particle (citkana) of brahma jyotir – which is the glaring effulgence of the transcendental body of Lord Śrī Kṛṣṇa. Whatever illumination appears in the material world is only a reflection of that supreme illumination that supreme Brahman effulgence spreads throughout both the material and spiritual skies. He says by a single fragment of Myself I pervade and support this entire universe. viṣṭabhyāham idaṁ kṛtsnam ekāṁśena sthito jagat. (Bg 10.42) ‘yasya prabhā-prabhavato jagad-aṇḍa-koṭi- Brahma-saṁhitā (5.40)- (I worship Govinda, the primeval Lord) whose effulgence is the source of the illumination of millions and millions universes. Lord also says: It is because of My supremacy that the wind blows, out of fear of Me; the sun shines out of fear of Me, and the lord of the clouds, Indra, sends forth showers out of fear of Me. Fire burns out of fear of Me, and death goes about taking its toll out of fear of Me.

“The Personality of Godhead Viṣṇu is the Absolute Truth, whose lotus feet all the demigods are always eager to see. Like the sun god, He pervades everything by the rays of His energy. He appears impersonal to imperfect eyes.” tad viṣṇoḥ paramaṁ padaṁ sadā paśyanti sūrayaḥ divīva cakṣur ātatam

Just as the demigod in the sun is a person and is perceived by his all-pervading energy, the sunshine, so the Lord, although in His eternal abode, is perceived by His all-pervading diffusive energies. The predominating Deity within the sun is Hiraṇmaya, another expansion of Lord Nārāyaṇa whose body is composed of golden effulgence, and has a golden hue which is illuminating the as well as maintaining the entire universe. In the Ṛg Veda, the predominating Deity of the sun is worshiped by this Ṛg mantra: dhyeyaḥ sadā savitṛ-maṇḍala-madhya-vartī nārāyaṇaḥ sarasijāsana-sanniviṣṭaḥ. Nārāyaṇa sits on His lotus flower within the sun. By reciting this mantra, or the Gāyatrī mantra every living entity should take shelter of Nārāyaṇa just as the sunrises. Therefore, when we chant gāyatrī during three sandhyās we should chant mantras in prayerful mood, not just mechanically but consciously meditating upon predominating deity Hiraṇmaya, an expansion of Lord Nārāyaṇa who sits on lotus flower within the sun and whose body is composed of golden effulgence and with golden hue illuminating and maintaining the entire universe. Ultimately, the energy, which sustains us by prolonging the duration of our life, is Kṛṣṇa, and Kṛṣṇa meets us at the end as death. (BG 9.19 Purport). The mantra in Śrī Īśopaniṣad, Mantra 15 –hiraṇmayena pātreṇa satyasyāpihitaṁ mukham tat tvaṁ pūṣann apāvṛṇu – is a simple prayer to the Lord to remove the brahma-jyotir so that one can see His real face “O my Lord, sustainer of all that lives, Your real face is covered by Your dazzling effulgence.”

The earth with 2/3 of vast ocean and 1/3 land would look like a moist grain of sand as compared to the sun. That 1/3 of land is divided into 5 continents filled with 3.5 billion humans. One of the continents is American continent. In North American continent, there is USA with 50 states. Each state has many cities, each city has many streets and there are many houses on a street. In realty human being is tiny jiva jantu-like an insect, aṇu (atomic size) as compared to the Lord who is Vibhu yet living in one house a person thinks, “I am very important and will live here forever. Is it not amazing? In the Bhagavad-gītā(10.41) Lord Kṛṣṇa says: yad yad vibhūtimat sattvaṁ śrīmad ūrjitam eva vā
tat tad evāvagaccha tvaṁ mama tejo-’ṁśa-sambhavam –“Know that all opulent, beautiful and glorious creations spring from but a spark of My splendor.”