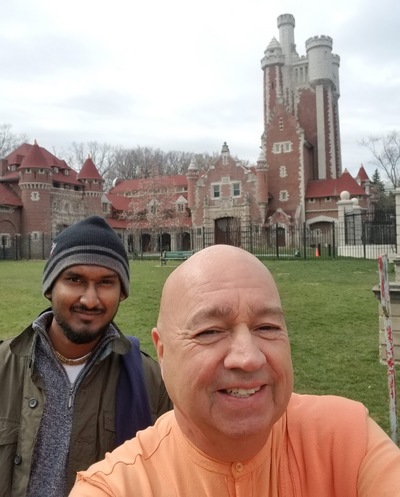 I embrace that quote by Plato, “Never discourage anyone who continually makes progress, no matter how slow.”
Plato, Socrates and the host of Greek philosophers reflect so much on what echoes Vedic wisdom.  In fact they had respect for the ways and thoughts of the culture east of them.
Here’s a verse from the Bhagavad-gita that resonates the similar tone of Plato.  Krishna states in verse 3.26 to do with karma yoga: na buddhi-bhedaṁ janayed ajñānāṁ karma-saṅginām joṣayet sarva-karmāṇi vidvān yuktaḥ samācaran “So as not to disrupt the minds of the ignorant attached to the fruit of results of prescribed duties, a learned person should not induce them to stop work.  Rather, by working in the spirit of devotion, he should engage them in all sorts of activities.”
The significant phrase here is to keep the spirit and to keep busy.
I was walking with Aishvarya from Trinidad near the castle called Casa Loma and there was a request for me to send a message to a younger practitioner of bhakti-yoga in Trinidad so he recorded some words I shared.  The essence of the message was, “Love, co-operate, work as a team.”  And “you are not allowed to be critical of each other.  Critique yourself first.”
I have found it interesting that the more active you are the more content you are.  The more you have time to sit without purpose the more you condemn others as if you had no faults.
Source: http://thewalkingmonk.blogspot.com/2020/04/friday-april-24-2020.html
Tags: bhaktimarga swami, blogs, blogger, the walking monk
E-mail me when people leave their comments –
Follow