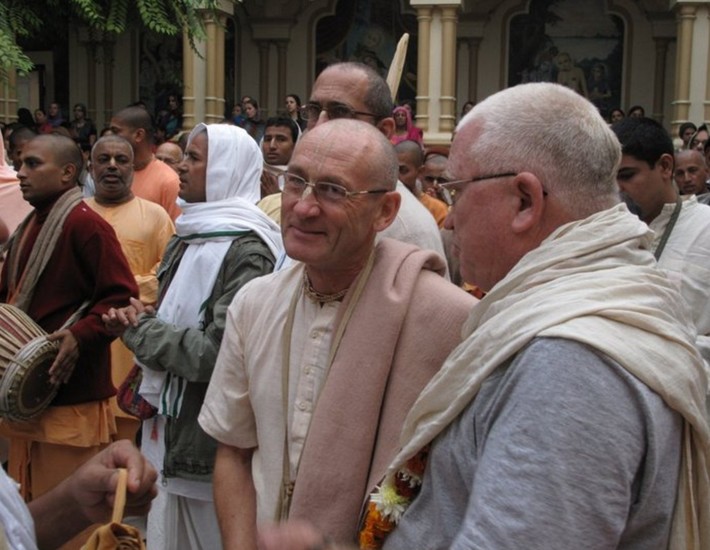 When I joined ISKCON in 1974, I immediately felt relief from material suffering. I was, and am, to be honest, a real Kali yuga specimen. The first service I had was working in the garden at Bhaktivedanta Manor. It was nice, after some of the other things I had done,prior to my attempt at becoming a devotee, but I may not be still trying to be a devotee, if I had had to do that my whole devotional life.

After about 10 days, I was asked to go out on book distribution, which, right from the start, I found very satisfying. My first sankirtan leader was Bhakti Chaitanya Swami, then known as Raghubir. It was great, to go out and give people “the mercy,” in the form of Srila Prabhupada’s books and magazines. Of course at that time, there was great emphasis on sankirtan, especially books, and it was nice to connect to people, about something real and crucial to their welfare.

Because of the difficulties, I had encountered before becoming a devotee, and the relief Krishna consciousness brought me, it was easy to see people’s suffering, and feel a tiny bit of compassion for them. Knowing that one had the cure for all their problems was very motivating, and the reciprocation from Lord Chaitanya was very tangible. Lord Chaitanya descended to give out love, and because I felt I was His follower, I was also giving out love. I guess I was in the mood of the hippies, “love, is all you need.”

Lord Chaitanya Mahaprabhu was the greatest scholar, but He only left eight very important verses. In the Siksastakam, He says, ” All glories to the Sri Krishna sankirtan, which cleanses the heart of all the dust accumulated for years together, and extinguishes the fire of conditional life, of repeated birth and death. This sankirtana movement is the prime benediction for humanity at large because it spreads the rays of the benediction moon. It is the life of all transcendental knowledge. It increases the ocean of transcendental bliss. and it enables us to taste the nectar for which we are always anxious.”

This first verse of the siksastakam, particularly resounds for me, when I go on sankirtan. All the wonderful features, and blessings of this verse become manifest. Especially, the ocean of bliss that one can experience when giving out a tiny particle of Krishna consciousness. So, no matter what the material circumstances are, it’s just worth it to taste this bliss. In fact, we could surmise that this is what drove Srila Prabhupada on, when he faced the austerities of coming to the West. The reciprocation of mercy from the Lord. After all, at one point in Vrndavana, after being attacked by a cow, he, in his own words, was wondering if he should have taken sannyasa.Later on, surrounded by his loving disciples, appreciating their devotion, and care for him, he said that nobody knows Krishna’s plan. Here he was in the US; Krishna had bestowed upon him, followers, recognition, and other opulences; so after all that struggle, he had been very blessed by Krishna. That is the reciprocation that to some degree, anyone who sincerely tries to give Krishna to others, can expect.

Sankirtan for me, is so blissful,[most of the time], that I actually enjoy it more than I ever did. It’s literally just giving out love.The longer you do it, the more you understand the value of what you are offering. For some years now, I have tried to cultivate people, and not just sell them a book, and be gone. I always have some cookies that I give out, and then I get everyone to say the whole mantra. There are many other services that are very enjoyable which I also do, like leading kirtan, giving class, diety worship, but for me, there’s nothing like connecting a new soul to Krishna. The nectar from that first contact is very sweet, especially since that soul may have never met a devotee, unless you had personally gone out. When Lord Chaitanya travelled to South India, He encountered some jungle creatures. The elephants, and the tigers were immersed in bliss from His contact. Some parrots landed on His hand and started to recite the wonderful glories of Krishna, and Radharani. They had a competition to see who could glorify their worshipful Diety the most, Krishna, or Radha. It begs the question, did those creatures descend with Him, or were they there anyway? Point is, they were animals, but their devotion became so manifest. How wonderful! So while Lord Chaitanya debated and defeated big scholars like, Kesava Kashmiri, and Sarvabhauma Bhattacarya, He also invoked the loving ecstasy of the subhuman species.

I feel that sometimes, we waste opportunities that are presented by not taking the time to speak to people, who may be very open. Granted, Srila Prabhupada emphasized the quantity of books distributed, but I think we can get more books out by taking opportunities to speak to and befriend ripe fruit that could easily join our ranks, and become sankirtan devotees in their own right. Srila Prabhupada himself spent many hours just speaking to people about Krishna. He didn’t just sell the book, he spent time just talking to people. In my experience, we can make devotees right there at that first encounter. We just need to be friendly, and “normal.” Maybe for very new devotees, that may not be able to spot a ripe fruit, it’s better to sell the book, and move on, but as we become more discerning about who is open, and reasonable, it’s good to spend some time with such people.

In Srimad Bhagavatam Canto 8 Ch 7 T44, It was said in glorification of Lord Siva. “It is said that great personalities almost always accept voluntary suffering because of the suffering of the people in general. This is considered the highest method of worshipping the Supreme Personality of Godhead, who is present in everyone’s heart.” This is after He swallowed the poison from the churning of the ocean.

In the purport Srila Prabhupada, “here is an explanation of how those engaged in activities for the welfare of others are very quickly recognized by the SP of Godhead.”

The wonderful thing is that although it may start as a major austerity, it becomes more and more relishable. Srila Prabhupada also explained how chanting Hare Krishna, and selling books is non different. For me personally, I could not sit down, and chant all day, but I can go out and introduce people to Krishna. And just as one develops a taste for chanting after some time, we can also develop a taste for sankirtan.

My prayer is that I can keep going out to meet people and tell them about Krishna until my dying breath. That would be the greatest benediction.