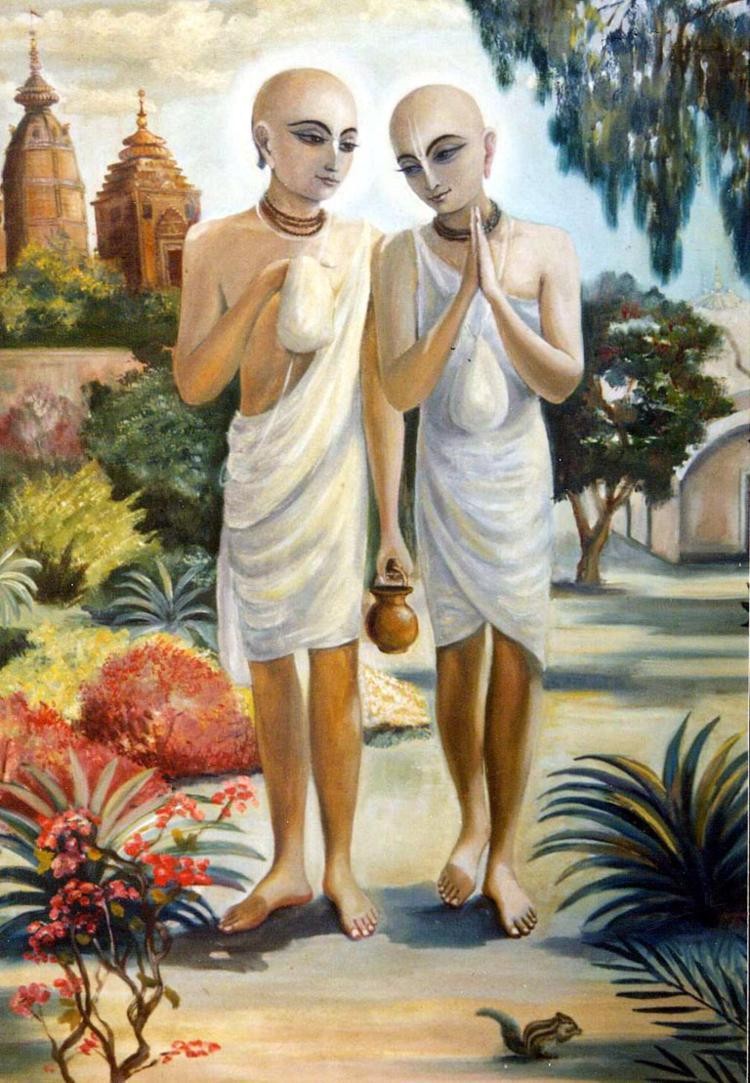 2) Where are my Svarupa Damodara and Rupa Gosvami? Where is Sanatana? Where is Raghunatha Dasa, the savior of the fallen?

Raghunatha dasa Goswami has glorified Sanatana Goswami in his Vilapa Kusumanjali (6) “I was unwilling to drink the nectar of devotional service possessed of renunciation, but Sanatana Goswami, out of his causeless mercy, made me drink it, even though I was unable to do so. Therefore he is an ocean of mercy. He is very much compassionate to fallen souls like me, and thus it is my duty to offer my respectful obeisances unto his lotus feet and take shelter of him.”

“Rupa Manjari’s closest friend, who was known by the names Rati-Manjari and Lavanga Manjari, appeared in the pastimes of Sri Chaitanya mahaprabhu as Sri Sanatana Goswami, who was considered to be a personal extension of the body of Sri Chaitanya Mahaprabhu.”

Lavanga Manjari is one of the asta manjaris, the main 8 manjaris assisting the asta Sakhis in service to Radha Krsna

Lavanga Manjari
In the eastern part of Sri Tungavidya’s kunja lies Lavanga-sukhada Kunja, which is very enchanting to all the beautiful-eyed gopis. In that kunja, Sri Lavanga Manjari always blissfully resides. In age, she is one day older than Sri Rupa Manjari, and she is very famous for her pleasant nature. Her complexion is like lightning, and she wears a dress marked with stars. She gives much happiness to Sri Krsna, and her nature is always daksina-mrdvi. Her age is 13 years 6 months and 1 day. In Kali-yuga, in gaura-lila, she is known as Sri Sanatana Gosvami.

Srila Prabhupada has given us some very important knowledge about Srila Sanatana Goswami:

“Sri Sanatana Gosvami is described in the Gaura-ganoddesa-dipika (181). He was formerly known as Rati-manjari or sometimes Lavanga-manjari. In the Bhakti-ratnakara it is stated that his spiritual master, Vidyavacaspati, sometimes stayed in the village of Ramakeli, and Sanatana Gosvami studied all the Vedic literature from him. He was so devoted to his spiritual master that this cannot be described. According to the Vedic system, if someone sees a Muslim he must perform rituals to atone for the meeting. Sanatana Gosvami always associated with Muslim kings. Not giving much attention to the Vedic injunctions, he used to visit the houses of Muslim kings, and thus he considered himself to have been converted into a Muslim. He was therefore always very humble and meek. When Sanatana Gosvami presented himself before Lord Caitanya Mahaprabhu, he admitted, “I am always in association with lower-class people, and my behavior is therefore very abominable.” He actually belonged to a respectable brahmana family, but because he considered his behavior to be abominable, he did not try to place himself among the brahmanas but always remained among people of the lower castes. He wrote the Hari-bhakti-vilasa and Vaisnava-tosani, which is a commentary on the Tenth Canto of Srimad-Bhagavatam. In the year 1476 Sakabda (A.D. 1555) he completed the Brhad-vaisnava-tosani commentary on Srimad-Bhagavatam. In the year 1504 Sakabda (A.D. 1583) he finished the Laghu-tosani.”
Caitanya-caritamrta, Adi lila 10:84

If one reads and carefully understands this Sanatana Siksa one will advance in KC:

Srila Krsna das Kaviraja has stated:
CC Madhya 24.346: Thus I have narrated Lord Caitanya’s mercy upon Sanātana Gosvāmī. When one hears these topics, one’s heart will be cleansed of all contamination.

Srila Sanatana Goswami asked Lord Caitanya to bless him to realize all these instructions:

CC Madhya 23.122: “If You want to make a lame man like me dance, kindly bestow Your transcendental blessings by placing Your lotus feet on my head.
CC Madhya 23.123: “Now, will You please tell me, ‘Let whatever I have instructed all be fully manifested unto you.’ By blessing me in this way, You will give me strength to describe all this.”
CC Madhya 23.124: Śrī Caitanya Mahāprabhu then placed His hand on Sanātana Gosvāmī’s head and blessed him, saying, “Let all these instructions be manifested to you.”

“‘Those who are self-satisfied and unattracted by external material desires are also attracted to the loving service of Śrī Kṛṣṇa, whose qualities are transcendental and whose activities are wonderful. Hari, the Personality of Godhead, is called Kṛṣṇa because He has such transcendentally attractive features.’
SB 1.7.10

Lord Caitanya made Sanatana Goswami the Sambhandha Guru, and he later established the worship of Radha Madan Mohan in Vrindavan.

May Srila Sanatana Goswami in his Nitya Svarupa as Lavanga Manjari mercifully bless us with the dust of her lotusfeet so we can also understand this Sanatana Siksa.
Srila Prabhupada has also given a summary of this in his “Teachings of Lord Caitanya”.
The books of Sanatana Goswami are many ,and by carefully studying and accepting the teachings he has left without mundane interpretation,we will advance nicely in our eternal relationship of service to Lord Caitanya and Radha Krsna.
In Vrindavana there is a festival in honor of Sanatana Goswami called Guru Purnima on this holy day at the Radha Madan Mohan temple