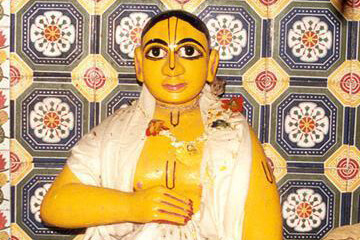 Sri Vakreshwar Pandit was present with Sriman Mahaprabhu during His pastimes in Navadwipa and after his acceptance of Sannyasa he also accompanied Him to Jagannath Puri. During the time of the Lord’s residence in Puri he continued to live with Him there as well. Sri Vakreshwar Pandit took birth in the village of Guptipara near Triveni. He was an especially proficient dancer and kirtaniya and could dance continuously for 72hours.

When Sri Caitanya Mahaprabhu began His pastimes of congregational chanting of the Holy Name of Sri Hari in Navadwip, Sri Vakreshwar Pandit was an important singer and dancer in that assembly. It was by His mercy that Devananda Pandit was delivered from the wrath of Mahaprabhu. He was also present during the Lord’s journey to Ramakeli. Devananda Pandit was, at one time, known as the foremost lecturer on the Bhagavat. One day Srivas Pandit went to hear his discourse, and being moved in ecstatic love by hearing the Bhagavatam, he began to cry. A few of the ignorant students of Devananda Pandit, thinking that this was creating a disturbance,removed Srivas Pandit from the assembly and left him outside.Though this was done in front of Devananda he didn’t restrain his students from this act of disregard to the devotee -Bhagavat.

There are two types of Bhagavat – the book bhagavat and the devotee bhagavat. For this reason, Devananda Pandit became implicated in an offense to a great devotee (maha-bhagavat). When Sri Caitanya Mahaprabhu came to hear how his dear devotee, Srivas Pandit, had been disrespected, he gave many instructions concerning the Bhagavat. He told that those who read the book Bhagavat but don’t offer respects to the devotee-Bhagavat, are simply offenders, though they may read the Bhagavat for eons,still they will never attain love of Godhead. The devotee bhagavata and the book bhagavata are non-different. In order to understand the book bhagavat one must first sincerely serve the devotee-bhagavata. Therefore Mahaprabhu neglected Devananda and didn’t bestow His mercy on him. One evening Vakreshwar Pandit came to perform dancing and chanting of the Holy Name at the house of one devotee from Kulia, across the bank of the Ganga from Nadia.Receiving this auspicious news Devananda proceeded there, and upon seeing the appearance of the symptoms of divine love in the person of Sri Vakreshwar Pandit he became charmed. Gradually a great crowd gathered at that place, and Devananda Pandit, taking a cane in his hand, kept the crowd in order so as not to obstruct the ecstatic dancing of Sri Vakreshwar Pandit.

In this way, Vakreshwar Pandit performed chanting, and dancing for two praharas (six hours), on into the night. When he finished dancing and sat down, Devananda came and offered dandavats at the lotus feet of Sri Vakreshwar Pandit, who became pleased with this service and blessed Devananda with the words “Krsna-bhaktihauk” -“May you attain devotion to Sri Lord Krsna.” From that day devotion was awakened in the heart of Devananda by the mercy of Vakreshwar Pandit. There after when Mahaprabhu came to Nadia to have darshan of his mother and mother Ganges, he bestowed His mercy on Devananda at Kulia. “Because you have served Vakreshwar I have noticed you.Vakreshwar is fully imbued with the Lord’s transcendental energy, and who ever becomes devoted to him, attains to the lotus feet ofSri Krsna. His heart is the personal abode of Sri Krsna and as Sri Krsna dances, so Vakreshwar also dances.Wherever one can get the association of Vakreshwar, that place is the sum total of all Holy places and is as good as Sri Vaikuntha.”

Sri Vakreshwar Pandit’s disciple was Gopal Guru Goswami and Gopal Guru Goswami’s disciple was Sri Dhyanchananda Goswami. In his Dhyan Chandra Paddhati – Dhyan Chandra Goswami has written – “that person who was previously very expert in the arts of singing and dancing, the gopi, Tungavidya, is presently renowned in the world as Vakreshwar Pandit. He has appeared on the fifth day of the dark fortnight of the month of Asar (Ashadha -June-July – Vaman mase) and he closed his pastimes in this world on the sixth day of the bright fortnight of the month Asar. While Vakreshwar danced, Mahaprabhu Himself would sing and Vakreshwar would catch hold of His lotus feet, saying; “O moon faced one, give me 10,000 gandharvas,and let them sing while I dance. Then I will be happy.” Mahaprabhu answered, “You are one of my wings. If I had another (like you) I could fly in the sky.”

[C. C. Adi 10.17]. Vakreshwar Pandit’s worshippable deity is Sri Sri Radha-kanta, whom he worshipped in Kasi Misra’s house, which was also the residence of Sri Caitanya Mahaprabhu (Gambhira).These Deities are still being worshipped there to this day.

Vakresvara Pandit is the Lord’s dear servant, who danced without rest for seventy-two hours. Mahaprabhu himself sang as he danced when Vakresvara fell down at his feet and said, “O moon-faced lord! Give me ten thousand Gandharvas. I will be happy if I can dance while they sing. The Lord answered, “You are like a wing. If I had another like you, I would be able to fly in the sky!” (Chaitanya Charitamrita 1.10.17-20)