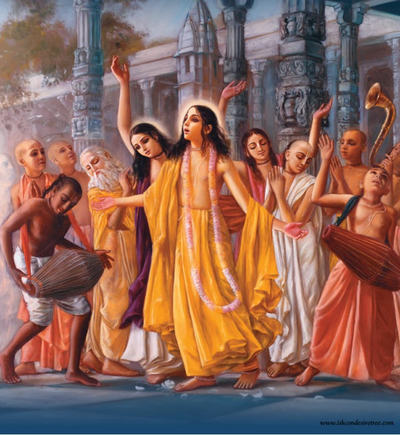 There is no mention of Sri Madhu Pandit in Caitanya Caritamrta. Only it is mentioned in Bhakti Ratnakar that Sri Gopinathji manifested Himself before Him. [B. R. 2.473]

Oh Srinivas! What more can I say? The Lord reveals Himself to his pure devotee, who then preaches his glories to the world. Who can describe their incomprehensible activities by which the Lord becomes subservient to their love. Thus did Sri Brajendra Kumar reveal himself to Paramananda Bhattacarya and Sri Madhu Pandit, who is the abode of many wonderful qualities.

“Thus has Sri Gopinathji, who is an ocean of mercy, and who sports on the enchantingly beautiful banks of Bansibat, become manifested by the grace of Sri Madhu Pandit.” [Sadhan Dipikayam]

Thus Sri Madhu Pandit became the servant of Sri Gopinath, whose bodily luster steals away the minds of everyone. Hundreds and thousands of people came running to see Him, famed as He is as sweetness personified. When the soothing sweetness and coolness of his charming form entered their hearts through their eyes, they found that the burning fire of material existence which had previously been burning there, was now extinguished.

The Deity of Sri Nanda Dulal which was fashioned from the same sila as Sri Shyamsundar (Khardaha) and Sri Ballabajiv (Ballabhapur), and which was brought from the Nawab’s palace, is considered by some, to have been worshipped previously by Sri Madhu Pandit.

Sri Nanda Dulal is still residing in the village of Saibona, which can bereached by bus from Khardaha. One has to get down at Matarangi Mor, and then proceed by rikshaw to the temple of Sri Nandadulal. The seva-puja is at present being conducted by disciples of Srila Omkarnath.

When Srinivas and his companions were preparing to depart from Sri Brindavan Dham with the bullock cart of books, Madhu Pandit presented him the flower garland of Sri Gopinathji as his blessing.

Madhu Pandit was the disciple of Sri Gadadhar Pandit.