Debate
• is oppositional: two sides oppose each other and attempt to prove each other wrong
• has winning as the goal
• lets one side listen to the other side to find flaws and to counter its arguments: “listening to refute”
• defends assumptions as the truth
• causes critique of the other position
• defends one’s own positions as the best solution and excludes other solutions
• creates a dosed-minded attitude, a determination to be right
• prompts a search for glaring differences
• involves a countering of other position without focusing on feelings or relationship and often belittles or deprecates the other person

Dialogue
• is collaborative: two or more sides work together toward a common understanding
• has finding common ground as the goal
• lets one side listen to the other side to understand
• reveals assumptions for reevaluation
• causes introspection of one’s own position
• opens the possibility of reaching a better solution than any of the original solutions
• creates an open-minded attitude, an openness to being wrong and an openness to change
• prompts a search for basic agreements.
• involves a real concern for the other person and does not seek to alienate or offend 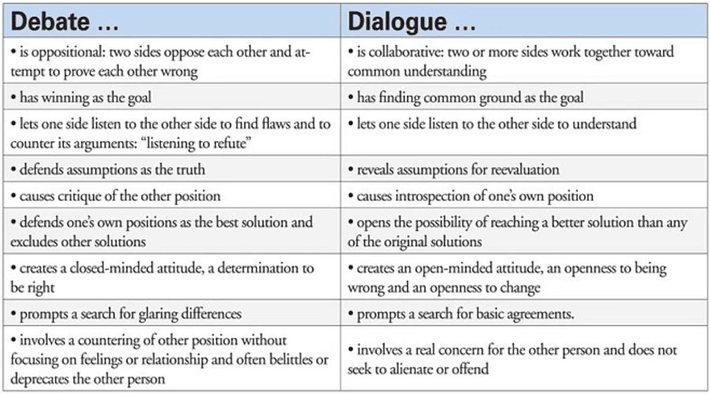